• "It is either President Uhuru Kenyatta's legal advisors who are the Attorney General Kihara Kariuki and the Solicitor General are giving him the wrong advice or he has simply refused to listen to their good advice," he said.

• Havi said Uhuru is bound by the law to uphold the Constitution, a responsibility he must fully adhere to. 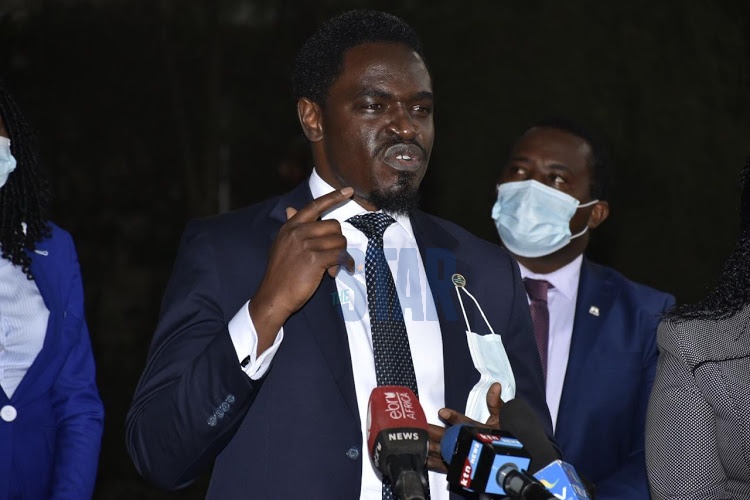 The Law Society of Kenya now says it will petition the National Assembly and the Senate to initiate a motion to impeach President Uhuru Kenyatta.

Society president Nelson Havi said the impeachment is with regard to the 'blatant disobedience' of court orders and violation of the Constitution.

Havi on Monday told journalists that the President swore to uphold the values of Constitution just as other state officers, including the Chief Justice and advocates, did.

"It has become the order of the day for the government to disobey court orders  in manner to suggest the Constitution is an inconvenience to them," Havi said.

He said it has been six months since Chief Justice David Maraga requested the swearing-in of 41 judges, but the President has taken no action.

"It is either President Uhuru Kenyatta's legal advisors who are the Attorney General Kihara Kariuki and the Solicitor General are giving him the wrong advice or he has simply refused to listen to their good advice," he said.

Havi said Uhuru is bound by the law to uphold the Constitution, a responsibility he must fully adhere to.

He said the society's Council as a result has resolved to petition the two Houses of Parliament to impeach the President.

He said a charge sheet will be forwarded to them and they must respond in seven days, giving reasons why they should not be removed from the list.

"After that they will be expected to appear before the council and the members where they will be given an equal opportunity to defend themselves," Havi said.

Havi said the society is well aware of a 'plan by the Executive to have a control of the Judiciary'.

"We have all witnessed actions aimed at weakening these institutions and if the two houses are unable to impeach the President then Kenyans have a responsibility to hold their leaders to account," Havi said.

Earlier on, Maraga accused the President of refusing to meet him to discuss the stalled appointment of 41 judges proposed by the Judicial Service Commission.

Speaking on Monday at the Supreme Court, Maraga asked Uhuru to direct the AG to begin the process of satisfying the decrees issued by the courts.

CJ says Uhuru's refusal to swear in the judges has contributed to the backlog of cases.
News
2 years ago

"The President's disregard of court orders doesn't bode well for our constitutional democracy and is potentially a recipe for anarchy," Maraga said.

"I must remind you that you swore to defend the constitution and the laws of Kenya. The laws include court orders. Demonstrate that faith and respect the rule of law and comply with court orders."

His sentiments were echoed by Elgeyo Marakwet Senator Kipchumba Murkomen who said the president should not have everything by himself.

Murkomen said a time has come for the President to be reminded that legacy  is not a coat he can just pick and wear.

He said though Uhuru is concerned about leaving a legacy after his term, every leader, including the Chief Justice, political leaders, civil servants and other 'hustlers' too want to leave a good legacy.

"Mr President, legacy is the sum total of what you do every day, not a coat you pick and wear at the end of your term. Obey court orders and rule of law," Murkomen wrote on Twitter.

He added, "It’s not you alone who wants a good legacy; CJ, elected leaders, civil servants, hustlers all want a good legacy. Don’t make everything to be about yourself."

Murkomen scolds Uhuru on legacy, says he makes everything about himself

Murkomen says Uhuru is making everything about himself.
News
2 years ago
Post a comment
WATCH: The latest videos from the Star
by PATRICK VIDIJA Investigative Journalist
News
08 June 2020 - 19:27
Read The E-Paper