Hundreds of families around the lakeside town are sleeping hungry.

• The over 200 operators from Naivasha were laid off after the Naivasha-Nairobi route was closed down due to the lockdown around the capital city.

• Stephen Mungai, the chairman of matatu operators in Naivasha, said the lockdown had left tens of families suffering and sleeping hungry. 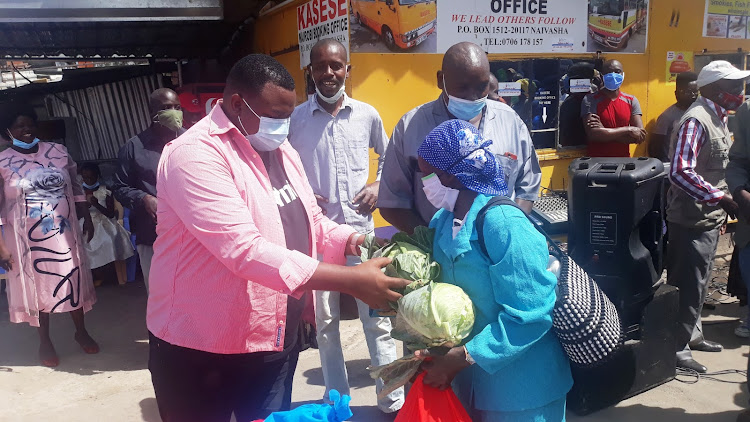 A group of matatu operators who were laid off in Naivasha due to the lockdown in Nairobi have received relief food from well-wishers.

The over 200 operators from Naivasha were laid off after the Naivasha-Nairobi route was blocked due to the lockdown in the capital city.

Stephen Mungai, the chairman of matatu operators in Naivasha, said the lockdown had left tens of families suffering and sleeping hungry.

Mungai said the operators as among the most affected by the pandemic.

“We have decided to come to the rescue of our drivers and operators who lost their jobs due to the current pandemic that has affected the whole nation,” he said.

Mungai said that hundreds of families around the lakeside town were sleeping hungry.

“Many people have been coming to our offices seeking a meal for their families and we decided to give the little that we could,” Mungai said.

Mashwa Breweries operations manager Francis Karanja said Naivasha was one of the towns hardest hit by the pandemic due to the high number of flower farms and hotels.

“These are hard times for many families due to the crisis caused by the pandemic and we have decided to support them through food rations that will push them for a couple of days,” he said.

Karanja challenged other companies in Naivasha to help the suffering families whose number was rising by the day.

Margaret Waithera, a beneficiary, said that getting a causal job since the disease broke out was a major challenge.

“We used to earn a living through casual jobs and many employers are no longer hiring leading to a major crisis for families and we are grateful for these donations,” she said.

Post a comment
WATCH: The latest videos from the Star
by GEORGE MURAGE CORRESPONDENT
News
04 June 2020 - 23:00
Read The E-Paper