• Uhuru said he will not turn back on his camaraderie with Raila.

• He intends to unite the country's communities to end electoral violence that has beset every election cycle. 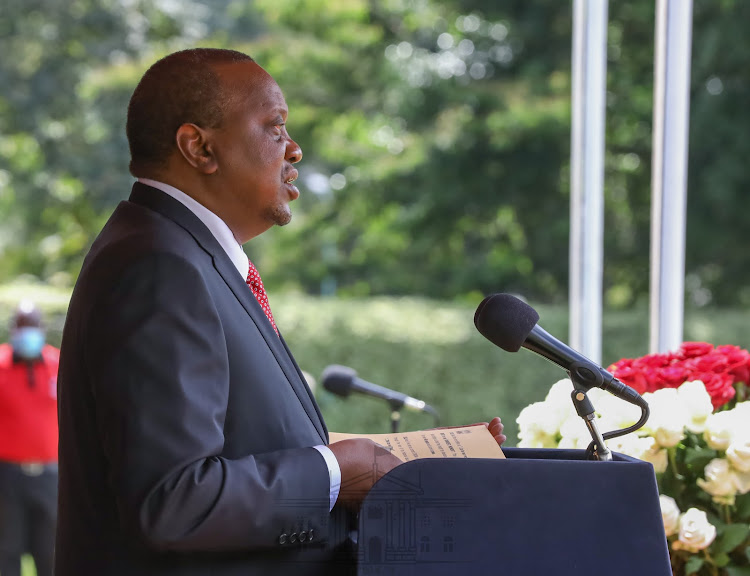 President Uhuru Kenyatta on Tuesday told Jubilee leaders he will pass the baton to an heir who supports and values his legacy.

In a statement many will consider a veiled warning to Deputy President William Ruto, Uhuru said he will support a candidate who will build on his agenda.

The remarks suggest his 2022 options are wide open despite pressure from Ruto's allies for the Head of State to throw his weight behind the DP.

It was also an open warning to Ruto to stop early political campaigns and support the President's legacy projects if he has to bank his 2022 presidential ambitions on the support of his boss.

In May 2018, at the height of aggressive countrywide campaigns by Ruto, the President also told his Nyeri turf that his 2022 presidential choice will shock many.

Ruto's allies then threw tantrums at the President accusing him of trying to renege on an earlier promise that the DP would take over.

Speaking  during a Jubilee Coalition Parliamentary Group meeting, a furious Uhuru maintained that there is no way he will rally behind anyone who will sabotage the agenda he has laid for the country.

MPs who attended the meeting held at State House in Nairobi said Uhuru warned that he will not dither from shoving away any politician who would undermine his leadership and national unity agenda.

“I will be happy to know that the person I will be passing the baton to is part of my agenda,” Uhuru told the 212 MPs.

The President's remarks came after he enjoyed a night out with Opposition chief Raila Odinga after the Madaraka Day celebrations at State House during the day.

The duo arrived at the Nairobi CBD in the middle of the night and was seen inspecting the re-carpeting of roads by the Nairobi Metropolitan Service.

The remarks at the PG meeting attracted furious reactions from Ruto's key ally, Soy MP Caleb Kositany, who said Kenyans have the constitutional mandate to elect their president.

“Kenyans have the votes, the winner will be the one who has the best manifesto and a track record of development. The reason Kenyans are eager for the next election is to end this culture of some people attempting to manipulate systems for their own benefit,” Kositany said.

The DP's early campaigns have been seen as disruptive to the President's agenda to build an enduring legacy.

Uhuru also has another nine-point agenda with Raila to cure the country's recurrent challenges by embracing national unity as manifested by the handshake on March 9, 2018.

The BBI is expected to deliver that agenda.

Cherangany MP Joshua Kutuny said the President was clear that he will no longer tolerate MPs trying to undermine his agenda.

“MPs who attended the PG understood clearly that the President did not mince his words. He was clear that you either support his agenda or ship out,” Kutuny said.

At some point, Uhuru is said to have banged tables vowing to firmly deal with those acting in a manner likely to suggest that they are sabotaging his agenda.

Ruto who was present during the PG listened pensively as his boss tore his allies apart in a stormy session marked by tension and anxiety.

Uhuru was invited to speak after Jubilee secretary general Raphael Tuju handed over the microphone to Ruto who ushered him to the podium.

Ruto is said to have told the President, "This is your day please come and speak to your people.”

Uhuru said he will not turn back on his camaraderie with Raila arguing he intends to unite the country's communities to end electoral violence that has beset every election cycle.

With these projects at his heart, Uhuru painted a picture of a man under siege by selfish politicians in constant politicking but with little regard to his legacy plan.

In a move described by those present as bold and fearless, Uhuru fired a salvo at Ruto allies saying he will fight off any attempts to turn him into a lame-duck president.

“Why do you go all over abusing me and hauling all manner of insults at me, for once, if you do not respect me why then can't you respect the institution of the presidency,” Uhuru said.

The President told the lawmakers that he was privileged with daily briefs about the insults they make in their native languages across the country.

“Some of you have gone as far as saying that I don't know what I am doing and that they are the ones who have done all the development projects in the country,” Uhuru said.

North Mugirango MP Joash Nyamoko who attended the meeting told the Star that the President told the lawmakers to desist from early campaigns and respect the institution of the Presidency.

“The President directed us to focus our energies and efforts in ensuring that we collectively deliver on the pledges and promises we made to Kenyans,” Nyamoko said.

But Kositany complained that the meeting was but a monologue.

“It was unfortunate that the President talked to us angrily without giving us an opportunity to air our concerns,” the Jubilee Party deputy secretary general said.

He went on, “It is sad that we had to wait for this meeting for three years only for us to be called and the only agenda is to be insulted.”

Kositany said the reason Mumias East MP Benjamin Washiali and Cecily Mbarire (nominated) were removed as National Assembly Majority Whip and Deputy Majority Whip respectively was that they refused to succumb to pressure and support “certain political narratives against their will.”

He said Uhuru was "visibly angry” and he did not allow anyone else other than Tuju and Ruto to speak.

“It is a sad day for democracy. None of us talked and he did not state his agenda for us in Parliament,” Kositany said.