• Ruto allies in a change of strategy say they must attend State House Parliamentary Group meeting. 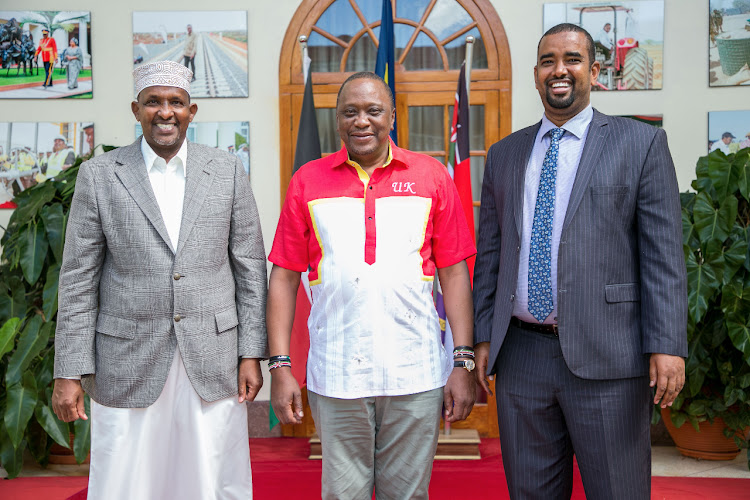 Jubilee secretary general Raphael Tuju confirmed to the Star on Thursday the grand house cleaning in the National Assembly leadership was in the offing.

It was the first official confirmation.

“We are definitely going to make changes,” Tuju said with finality, not saying when.

Asked if Majority Leader Aden Duale could survive, Tuju responded curtly, “The boss will have the final say.”

Duale is seen to have meticulously pushed through government business in Parliament and moderates in Jubilee have suggested he should be spared.

However, he is also being accused of being among the elite politicians around DP Ruto who have opposed the handshake between the President and ODM leader Raila Odinga.

The Jubilee National Executive Council is to meet anytime from Friday to set the agenda for the Parliamentary Group meeting tentatively set for Tuesday next week.

“We are on standby. The itinerary of the boss [Uhuru] is very full. But the NEC can even meet on Saturday or Sunday. It all depends on the President’s availability because he chairs the NEC,” Tuju told the Star.

In an interview on NTV on Wednesday, Uhuru made it clear that he will not work with individuals sabotaging his agenda - an indirect dig at the DP.

"Do not let your ambitions of tomorrow cloud what you must do today. What you do today is what shall determine where you shall be tomorrow. That's all and it is as basic as that to me," the President said.

He said the parliamentary leadership is critical to successful implementation of his agenda.

Two weeks ago, Uhuru spearheaded the toppling of Kipchumba Murkomen and Susan Kihika as the Senate Majority Leader and the Majority Whip, respectively.

With the President's blessing, Senate Deputy Speaker Kithure Kindiki was impeached in a historic vote that exposed Ruto's now-shaky grip on Parliament.

Allies of the DP have vowed to even gatecrash the Jubilee Parliamentary Group meeting at State House.

Snubbing a similar meeting two weeks ago turned disastrous for the Ruto brigade after the President marshaled the requisite numbers to kick out Murkomen and Kihika.

In a clear change of strategy, defiant MPs allied to the DP said they are ready to meet face-to-face with Uhuru and make their case.

“We want to be part of the resolutions so they are not made behind our backs,” Jubilee deputy secretary general Caleb Kositany told the Star.

The Soy MP, a marked man in the anticipated changes in the Jubilee National Executive Council, said he hopes the meeting will allow the leaders to express their concerns and not be a forum where they will be talked at and lectured.

“I have heard about the meeting but no invite so far. But once we have it, we will go. We have nothing to fear as all that we have been demanding is the rule of law. If members say they are no longer interested in having my services as the deputy secretary general, they will say so in a formal way and not haphazardly,” he said.

Ruto’s wing has always claimed it controls Parliament because of its numerical strength.

They skipped Uhuru’s Senate PG to deny the President the requisite numbers to make parliamentary changes.

Uhuru outwitted them, however, and got the signatures of 20 senators that were required to topple Murkomen and Kihika.

In the Senate vote against Kindiki, the Ruto faction only got seven votes against 54.

On Thursday, Kieni MP Kanini Kega, a close confidant of the President, said they have consulted widely with members and have full confidence the PG would be held without hitches.

“We are satisfied with the efforts that have been put in behind the scenes to guarantee an impressive attendance at the PG,” Kega told the Star.

He said the purpose of the PG is to rally Jubilee members behind the President's agenda and crack the whip on errant ones seen as sabotaging the head of state's plans for the country.

“Change is inevitable. We have consulted widely and believe the housecleaning must continue to restore order in the party,” he said regarding the impending purge of the Deputy President's allies in the National Assembly.

Vocal Kimilili MP Didmus Barasa said as the Ruto brigade, they will use the meeting to face their accusers and ask probing questions.

“This is the meeting we are looking forward to, and whether there will be invites or not, we will attend. We want to face our accusers for them to lay out their grounds,” he said.

“If we had such PGs for all these years, we would not be here. Some of these misunderstandings would have been resolved and when we get there [State House], we want to see these people who have refused to follow the party constitution,” he added.

The Ruto wing has often claimed it has more than 146 MPs in the National Assembly.

However, it appears the numbers have begun to dwindle with Kenyatta extending his claws to deal with defiant lawmakers.

It’s at the State House meeting where the fate of Ruto's allies in the National Assembly, including Duale, could be decided.

Among the issues Ruto's allies want addressed is why the party hastily changed members of the National Management Committee without ratification by the National Executive Committee.

They will also ask how the ruling party entered into a post-election agreement with Kanu and will want to know how the expected purge in the National Assembly was decided.

Barasa, who is a close ally of the DP, defended the track records of Duale, Washiali and Mbarire among other House leaders, terming them “performers par excellence”.

“Even a nursery child would tell you Duale is a performer and so are the rest of the other chairmen of committees. No government bill or motion has been lost in the National Assembly and that tells you how dedicated these people are. To remove them now is pure malice and a personal vendetta,” he said.

On Tuesday party secretary general Tuju took issue with Kositany’s continued use of official party letterhead, which he said amounts to insubordination.

“We will not be lenient on matters of discipline,” Tuju, Uhuru’s right-hand man in the brutal JP takeover, said.

Kirinyaga Woman Representative Wangui Ngirici said her position has not changed. She still supports DP Ruto to succeed Uhuru in 2022 as that was the Jubilee deal.

She said as soon as the country is opened up after the Covid-19 restrictions are lifted, Jubilee should proceed to an election.

“All that I want to see in the PG is for the leaders to be given a chance to engage and to sort out our party issues,” she said.

Kapseret legislator Oscar Sudi said the PG is long overdue and he will be “among the first to take the front seat” at the State House meeting.

“We will be appealing to the President to look back at the foundation of Jubilee and how we implement that,” he told the Star.

Duale said he could even serve as a clerk in State House if Ruto wins in 2022.
News
2 years ago

Inside the scheme to save Duale

President Uhuru said to be ready to spare Duale.
News
1 year ago