• The Jubilee purge in the Senate continued on Tuesday with the party announcing changes.

• But unmoved Ruto allies laughed off the changes insisting they are not worried about losing their prestigious positions in Parliament. 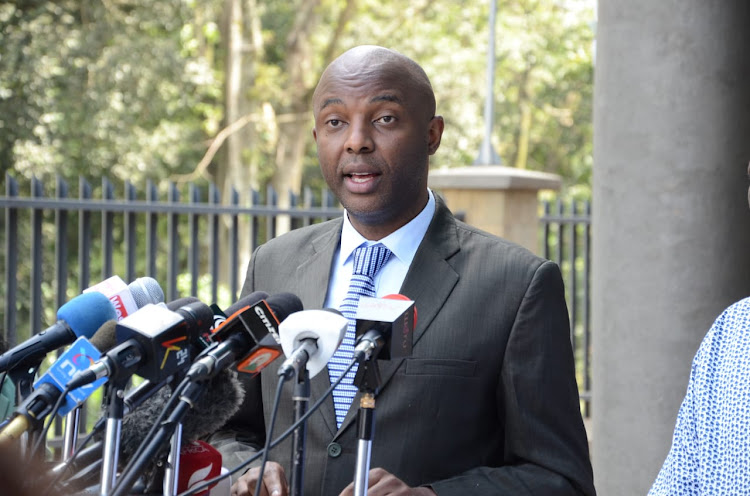 The Jubilee purge in the Senate continued on Tuesday with the party announcing changes that appear to push out lawmakers aligned to Deputy President William Ruto from key positions.

But Ruto allies laughed off the changes insisting they are not worried about losing their prestigious positions in Parliament.

The Senate’s Justice and Legal Affairs Committee (JLAC) chair, Samson Cherargei, an ally of Ruto, said he is not scared of losing his position because of his association with the Deputy President.

He said the party should, however, explain to him how he has failed as the chair of JLAC during his tenure.

“If they want to take it, so be it. I have no reason to be scared about it at the end of the day,” the Nandi senator said.

In the changes announced by newly installed Senate Majority whip Senator Irungu Kang'ata, Ruto allies will be removed from the leadership of key committees and replaced by perceived party loyalists.

In the changes, Senator Christopher Lang'at of Bomet has been replaced at the House Business Committee by Nairobi’s Johnson Sakaja, a staunch supporter of President Uhuru Kenyatta.

Lang'at also lost his position as Education Committee chairman. He was replaced by Senator Alice Milgo.

Lang’at will now serve in the JLAC as a member.

He will be joined in the same committee by Tharaka Nithi Senator Kithure Kindiki who until last week Friday was the Senate deputy speaker.

The changes which appeared to target senators who voted against the removal of Kindiki have already been communicated to Senate Speaker Kenneth Lusaka for further action.

Senate Majority Leader Samuel Poghisio of West Pokot, who before his elevation was a member of ICT committee, will now leave the slot to Laikipia Senator John Kinyua.

Meru’s Linturi Mithika also lost his membership at the powerful Senate County Public Accounts and Investment Committee. He will be replaced by Fatuma Dullo of Mandera.

Linturi was moved to Delegated Legislation where he will replace Poghisio who also lost his membership at JLAC.

John Kinyua will also lose his position as the chairman of the Devolution Committee.

Former Senate Majority Leader Kipchumba Murkomen will now be a member of the Devolution Committee.

The three senators were accused of defying Uhuru, who is the party leader.

The Laikipia senator said he is okay with the changes which he described as normal.

“I don't think there is any cause for alarm. I think it is okay. It is within their power to do what they think is right,” he said.

He further stated that he is happy for having been given that opportunity to serve as chairman for two years.

“I was chairman of the Devolution Committee and member of Health Committee. What happened is normal. Nothing to worry about,” he stated.

Kanga’ta was accompanied by Jubilee Secretary General Raphael Tuju and chairman Nelson Dzuya when he announced the changes at the party’s headquarters along Thika Road.

“We are making further changes to the Senate and the same will be communicated to the speaker today,” Kanga’ta said.

Tuju said the party will do everything to ensure discipline in the ruling outfit which has of late been bogged by internal squabbles.

“Our party constitution will be adhered to; I want to make it clear that we won’t be merciful in regards to the discipline in the party,” Tuju said.

But according to Cherargei the party is applying double standards. He said no action was taken against MPs who campaigned for ODM during the Kibra by-election in November last year.

“The party did not take action against Nominated MP Maina Kamanda and Kirinyaga Governor Anne Waiguru for supporting a rival candidate,” he explained.

The CS without portfolio confirmed that the party is ready for National Assembly’s Parliamentary Group meeting and is only waiting for Uhuru to fix the meeting in his diary soon.

It is expected that more heads will roll during the PG as the purge will be extended to members of National Assembly who have not been toeing the party line.

“We will not be lenient on matters discipline, whatever disciplinary action we will take, we will follow due process.”

Mumias East MP Benjamin Washiali - another candidate of axing - on Tuesday told the Star that he was ready to lose the position, should the party decide to remove him.

The Mumias East MP nonetheless warned that the purge could cripple the oversight role of Parliament.

He maintained that the law should be followed in removing any legislators from parliamentary positions.

“These leaders have been running around the country daring and insulting the President, but when he takes action, they cry,” she said.