Ruto on shaky ground as 'tyranny' of numbers diminish

Allies have deserted him 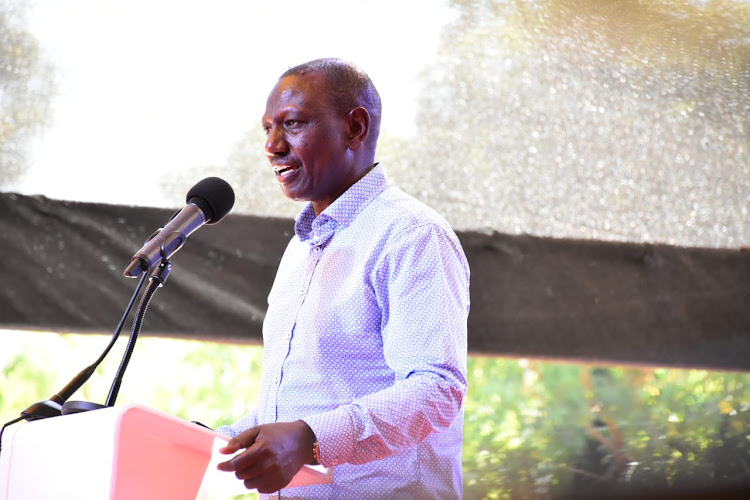 It has emerged that the DP may not be having the numbers in Parliament after the removal of one of his key allies, Kithure Kindiki, as Senate Deputy Speaker.

Kindiki, a professor of law, is Ruto's staunch footsoldier from Mt Kenya East.

He was once touted as the DP's possible 2022 running mate and his removal is a staggering blow to Ruto.

On Friday, 54 out of 67 senators supported Kindiki's removal motion. Only seven stood with the DP and Kindiki.

Two senators who supported the motion in absentia would have enhanced anti-Ruto numbers to 56, leaving the DP even more exposed.

The motion only needed 45 senators to send Kindiki packing.

In what appears to be a big blow to the DP, five nominated senators who have previously been aligned to him deserted him at the hour of need as President Uhuru Kenyatta triumphed with the support of opposition troops.

Friday's voting patterns in the Senate exposed the DP's vanquished grip of Parliament. Ordinarily, the DP's camp, christened Tangatanga, would be flexing muscles on who has the numbers but the President's Kieleweke wing backed by the opposition was unbeatable.

Linturi, a key Ruto ally who opposed Kindiki's removal motion in the House, claimed senators had been intimidated.

“People had received all manner of intimidation and were not voting out of their conscience. Some of us said no and stood on the side of history," he said

Kindiki's removal is Ruto's second high-stakes loss after his other key ally, former Kiambu Governor Ferdinand Waititu, was kicked out of the office in January.

Despite protests from Ruto's allies, Uhuru and Raila Odinga's allies got their way to impeach Waititu, 28 votes to 11 votes.

On May 12, Uhuru's ongoing purge of the DP's lieutenants in Parliament claimed Kipchumba Murkomen and Susan Kihika as Majority Leader and Majority Whip, respectively.

They were replaced by Samuel Poghisio of West Pokot and Murang’a Senator Irungu Kang’ata, respectively.

However, it was the fall of Kindiki from a most strategic position in the Senate that confirmed the DP's dwindling fortunes in the control of the bicameral House, amid an impeachment talk against him.

The President is set to launch a brutal purge on the DP's allies occupying key positions in the National Assembly among the Majority Whip Benjamin Washiali and his deputy Cecily Mbarire.

There are reports that the President may spare House Majority Leader Aden Duale, who despite being a Ruto ally, is still loyal to the President.

Political analyst Dunstan Omari told the Star that the ultimate objective of the forces opposed to DP is to impeach him.

“The ultimate gameplan is to impeach Ruto. The President was just using Kindiki ouster to test the numerical strength,” he said, adding that Ruto is walking a political tightrope in Jubilee.

Kindiki was accused of being disloyal to Uhuru by failing to attend a Parliamentary Group meeting at State House, Nairobi, where a decision was reached to dismiss Murkomen and Kihika.

If the changing dynamics are reflected in the National Assembly, then the DP's impeachment could be an easy ride for his political detractors as they would be able to raise the requisite numbers.

During the dispute over the changes to the Jubilee National Management Committee, Ruto had tweeted that 146 members had written to the Registrar of Political Parties raising objections.

Jubilee, the offshoot of the President’s TNA, Ruto’s URP and 11 other small parties that collapsed in 2016, has a total of 171 MPs in the National Assembly.

With the opposition working closely with Uhuru, analysts say, Ruto's goose would be cooked if a motion of no confidence finds its way into Parliament.