• Majority leader says unionist's education level does not allow him to understand the workings of his office.

• But Duale told Atwoli that if it pleases, he should 'look for the nearest Kenya Power transformer and hug it'.

by KURGAT MARINDANY Correspondent
sponsored by THE STAR KENYA None
News
23 May 2020 - 17:50 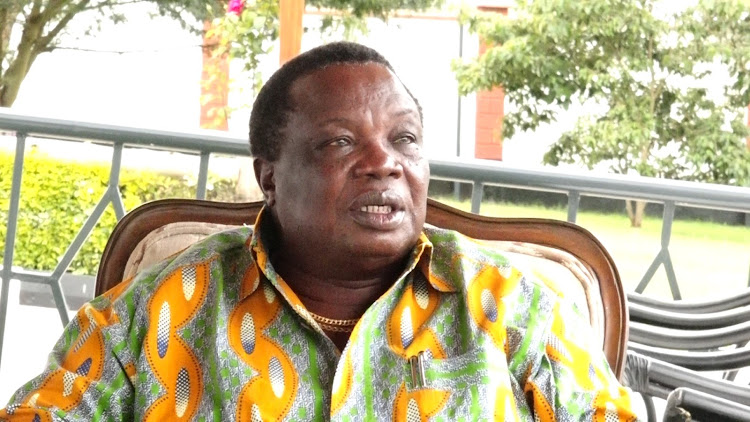 Cotu Secretary General Francis Atwoli on Saturday thanked the Senate from kicking out its deputy speaker Kithure Kindiki over claims of disrespecting the party leadership.

Atwoli, who spoke in his Ildamat home in Kajiado Central, particularly thanked senators from Western Kenya for joining hands with colleagues to ensure they voted in unison.

“The same changes must be now be extended to National Assembly because it will be of no value to vote out Prof Kindiki and leave another in Parliament who is holding a key position in government when it comes to legislation,” Atwoli said.

“That person is Majority leader Adan Duale. I will use all my available resources to campaign for his removal. His position must equally be dealt with,” the trade unionist said.

Responding to Atwoli, Duale said his position in Parliament is properly constituted under the Constitution.

“Does Atwoli think I care? Does he know that I have a history of fighting for change. Furthermore, is he a member of Jubilee Parliamentary Group?” Duale asked.

The Majority leader claimed Atwoli’s education level does not enable him to understand the workings of Article 108 of the Constitution that creates his office.

Atwoli had claimed that 10 years ago, he predicted that Duale was likely to be an impediment to the country’s economic and overall development owing to the position he is holding.

But Duale reminded Atwoli that his organisation - Central Organization of Trade Union - is not an affiliate of Jubilee Party parliamentary group that is charged with appointing him under the leadership of President Uhuru Kenyatta and Deputy President William Ruto.

“Duale has brought to Parliament bills and a lot of amendments on laws concerning workers of this country with ulterior motives by even trying to outlaw strikes,” Atwoli said.

In his response, Duale asked what Atwoli was actually acting for, adding that the unionist has no knowledge of how Parliament operates and handles bills.

He claimed that responding to Atwoli’s utterances is like accepting the trade unionist to be his equal. “I want to tell him that elders of his age in county spend more time in mosques praying to Allah to give us peace and to keep at bay this Covid-19 that is causing trouble to our people. They do not wear chains like Atwoli.”

He told Atwoli that if it pleases, he should “look for the nearest Kenya Power transformer and hug it”.

Earlier, Atwoli had claimed that all those people associated with DP Ruto led by Duale should be stopped from ascending to power because they are “dangerous”.

The Leader of Majority said, “At his age, he should be thinking about his retirement instead of acting maliciously by abusing elected leaders who are in leadership through the blessing of the electorate.”

“Atwoli should be in the know that Duale will be the last person to be scared by his utterances,” Duale said.

STAR COMMUNITY POLICY AND PARTICIPATION GUIDELINES
by KURGAT MARINDANY Correspondent
sponsored by THE STAR KENYA None
News
23 May 2020 - 17:50