• The highlight of the stormy session were the numerous points of order being advanced by either side of the divided as temperatures flared. 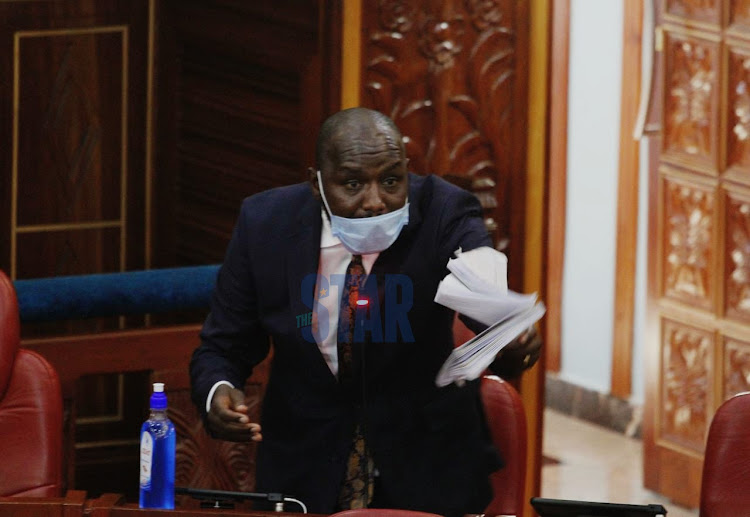 Elgeyo Marakwet Senator Kipchumba Murkomen during the special sitting in Parliament on May 22, 2020.
Image: ENOS TECHE

Temperatures flared in the Senate as the motion for the impeachment of Tharaka Nithi Senator Kithure Kindiki got underway in Parliament on Friday.

The highlight of the stormy session were the numerous points of order being advanced by either side of the divided as temperatures flared.

Murkomen, standing on a point of order, accused Orengo, a senior counsel, of continuously poking holes on his academic qualifications yet they went to the same University.

“Senator Orengo has over and over again doubted my practice and knowledge of law and my academic qualifications,” fired Murkomen.

Earlier, Orengo had asked the Elgeyo Marakwet senator to read 'widely' and made reference to a couple of books.

“We are exercising our legislative authority under the Constitution. A decision by Parliament is not an administrative action. Senator, you may need to read if you have not read,” Orengo told Murkomen.

As the motion for the ouster of Kindiki got underway, the Speaker, Kenneth Lusaka was forced to stop Ruto's allies who had moved a point of order objecting the tabling of the motion.

Murkomen and Lusaka clashed, with the Speaker telling the Elgeyo Marakwet senator he had also gone to school and knew how to conduct affairs.

Notice of motion to remove Kithure Kindiki filed in Senate