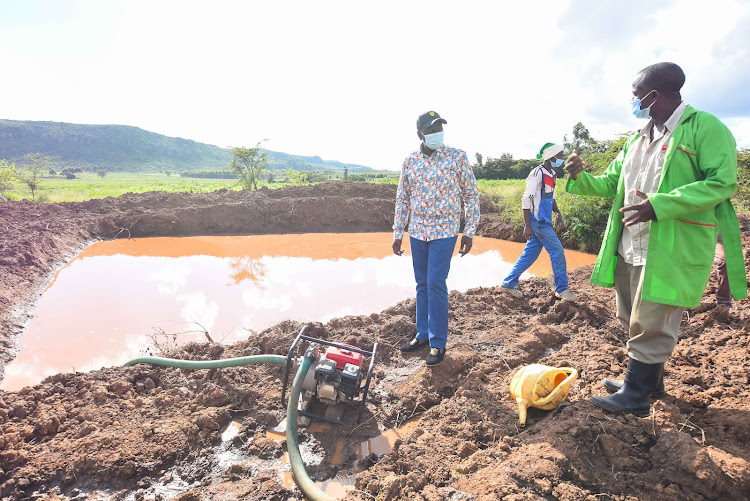 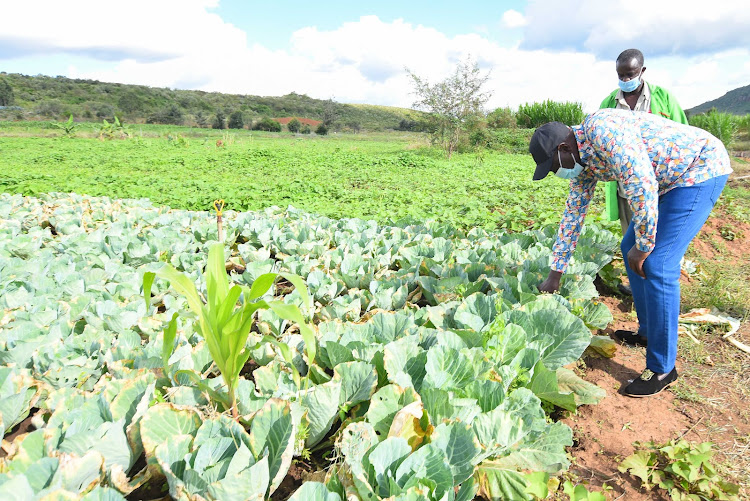 The government last month banned direct food and non-food donations to the vulnerable and directed that such support should be offered through the Covid-19 Emergency Fund.

However, on Wednesday Ruto moved to the expansive Kikuyu constituency with donations tucked in bags clearly emblazoned “William Ruto Foundation and Kimani Ichung’wa.”

Critics say Ruto is simply daring Kenyatta that he would go directly to the people for his 2022 presidential bid despite the Jubilee takeover.

Sources said similar drives are lined up by the DP in most constituencies where MPs backing his bid are facing the President’s wrath.

Ruto has been quietly making donations in various parts of the country including the Coast through elected and religious leaders.

“The fact that the food that he was giving was branded in his name is part of that defiance…He is actually using the donation for politics. We saw in Mombasa the likes of Mohammed Ali donating.” 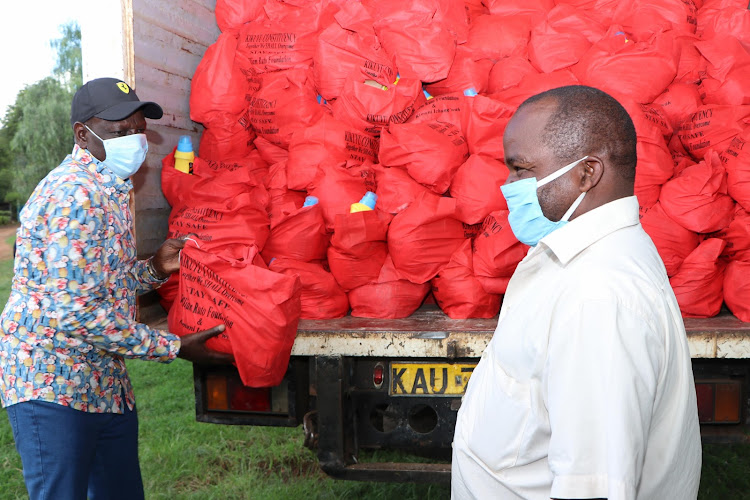 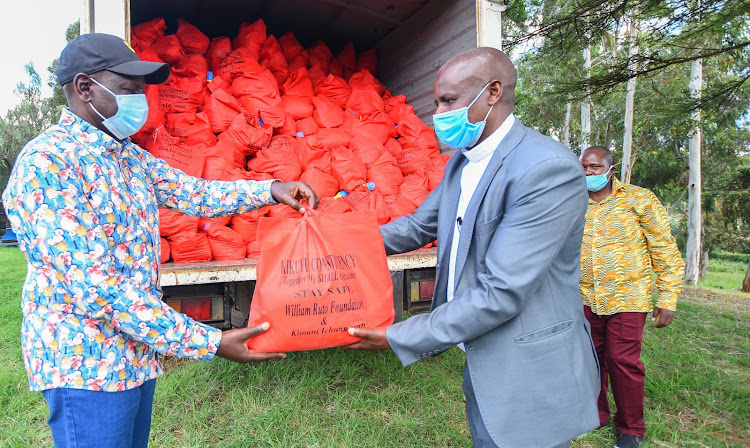 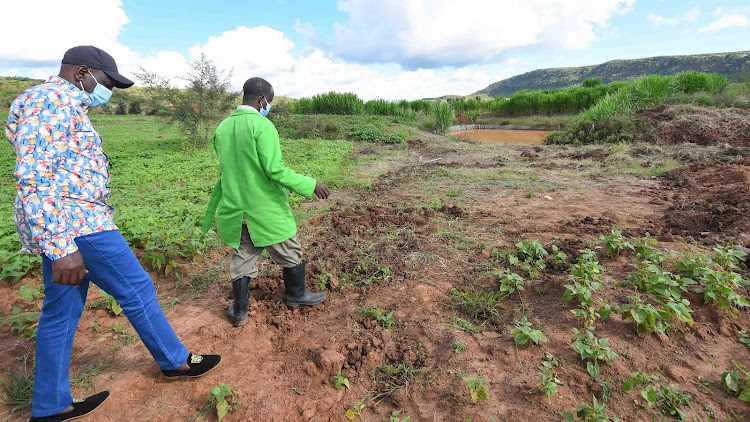 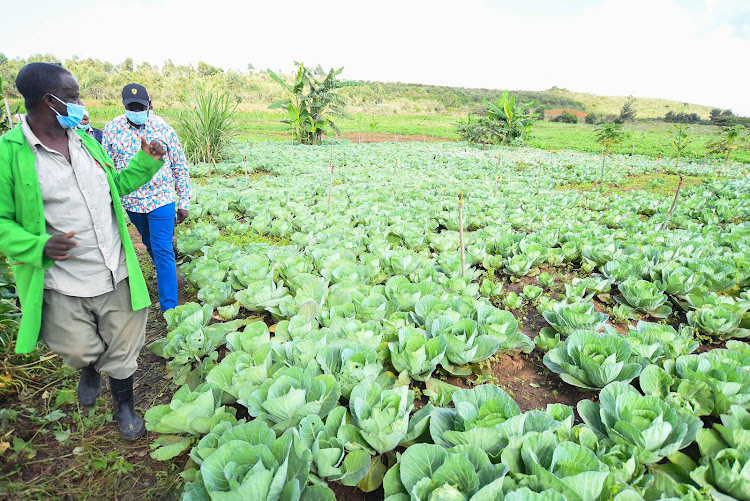 Ichung’wa, a key ally of the DP, is part of some Mt Kenya MPs marked by the Uhuru wing and is set to be ousted as chairman of the Budget Committee of the National Assembly.

During Wednesday’s visit, the DP also inspected the construction of Marengeta dam in the constituency.

But in what appears to be a change of strategy, Ruto has remained mum as his allies tear into the President alleging a scheme by state operatives to weaken key state agencies as well as independent constitutional commissions.

“Today, 600 families in Nachu ward were part of the wider 3,600 households that benefitted from our food distribution to shield Kenyans from adverse effects of the outbreak,” Ruto wrote on his social media platforms after the donations.

Previously, Ruto would take to social media to deliver a blistering attack on his detractors.

He has not publicly commented on the removal of Kipchumba Murkomen and Susan Kihika as Majority Leader and Majority whip respectively.

On Frday, another confidant of the DP, Kindiki Kithure, was set to fall as Senate Deputy Speaker.

“I have instructions as Chief Whip to punish any senator who did not attend the State House meeting. We are only punishing Jubilee members who are defying the party and its leadership…If you defy the party leader, we will punish you by enforcing the law,” Senate Majority Whip Irungu Kangata said on Thursday.

It is not clear when the DP registered his foundation.

Politicians have used their foundations to mobilise resources for charitable activities which end up being campaign incentives.

However, it is understood that the DP has taken a cue from what the First Lady Margaret Kenyatta’s Beyond Zero organisation is doing in distributing food directly to those affected.

Unlike in Nairobi where he is using a network of politicians and religious organisations to distribute the food, it was the first time Ruto was directly handing packages over to the targeted families.

Sources within his office say this is the trend that will be seen in the coming days.

Some of the goodies contained in the packages included a 2kg packet of unga, 1kg beans, 400ml cooking oil, 2kg of sugar and in some cases soap.

In Mombasa, defiant Jubilee politician Mohamed ‘Tenge’ Salim vowed he would continue distributing food donated by Ruto even after being arrested for breaching government regulations on gatherings.

Tenge was Wednesday set free by the Shanzu law courts after paying a Sh3,000 fine.

"I will not relent in distributing Ruto’s food. There are vulnerable people who need the food and stopping now will be wrong to them and to Allah,” said Tenge.

Nyali MP Mohammed Ali on Thursday said using the Covid-19 pandemic to settle political scores was both archaic and immoral.

“For those with political hatred, Ruto’s food will continue being distributed at the grassroots observing all the country’ laws, rules and regulations,” said Ali.

On Thursday a section of Ruto’s men claimed there was a scheme to undermine the independence of the Judiciary, neutralise the office of the DPP and paralyse the National Assembly.

They claimed a plot to silence lawmakers that are critical of Uhuru’s style of administration.

The leaders said this would be executed through threats of recall and removal; threats to life; withdrawal of personal security; and targeted harassment of the respective leaders’ spouses and children.

The MPs claimed there were also arrangements to apprehend MPs on fabricated charges by the Directorate of Criminal Investigations, EACC and KRA.

“This is in order to wear out such leaders by shuttling them between courts and police stations in the name of trumped-up charges,” the MPs said.

Unless you kill me I am unstoppable - DP Ruto

Ruto says he is aware of a bigger plan to undermine and demean his political bid.
News
2 months ago

Resignation a non-option for Ruto

Constitutional posts of offices occupied by Oginga and Ruto are fundamentally different.
Opinion
4 months ago

Big Five may find it difficult to muster numbers to impeach Ruto.
News
2 months ago
STAR COMMUNITY POLICY AND PARTICIPATION GUIDELINES
by STAR TEAM The Star
News
22 May 2020 - 05:00