Kisii's first virus case sneaked back into Kenya from Tanzania

• Samples from the patient were taken to Kisumu where they turned positive. Contact tracing has started.

• So far, 14 family members have  been put in quarantine. 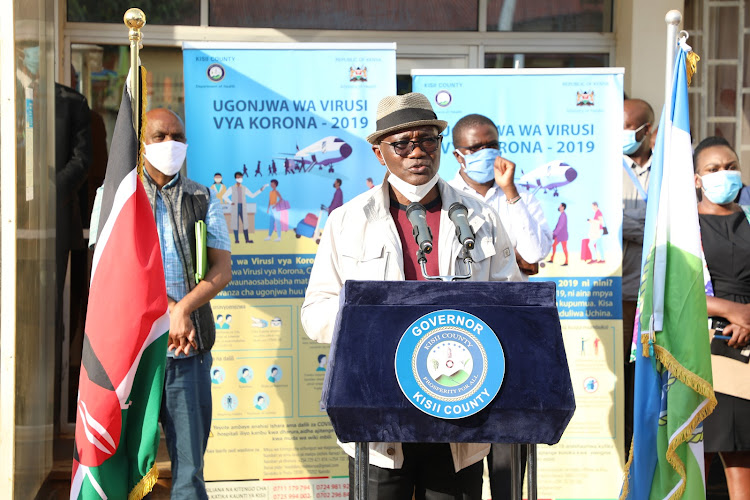 Kisii county's firs Covid-19 case is a Kenyan hotel staffer who had been working in Tanzania and sneaked into the country a fortnight ago and proceeded to Gionseri.

Kisii Governor James Ongwae on Wednesday said the 38-year-old man has been transferred from the  Kenya Madical Training College to Kisii Teaching and Referral Hospital.

The man worked as a hotelier in Tarangire, Tanzania and Ongwae said he is in stable condition.

Samples from the patient were taken to Kisumu where they turned positive. Contact tracing has started.

So far, 14 family members have  been put in quarantine.

“We are treating all the 23 people being quarantined at KMTC-Kisii as his possible contacts. We are taking samples from them afresh and we will retain them for a further 14 days," Ongwae said.

"KMTC will now be an isolation centre for all contacts traced to the person. We are fumigating the room he was being held in and the entire KMTC premises."

He added: " Our monitoring team are still tracing at least three other people said to had interacted with the man and once found, they will be brought into the quarantine facility and subjected to tests."

The governor said the first Covid -19 case in the county has pushed his administration to ramp up screening along all entry points to the devolved unit.

Residents across the county were told to ensure any person sneaking in from regions zoned as hot spots are reported to the authorities.

Kisii County Commissioner Stephen Kihara lamented that some people were illegally using lorries and food delivery vans - exempt from curfew and lockdown measures - to sneak into the county from hot spots.

The Commissioner warned transport operators against ferrying unauthorised persons across the country.

He said, in conjunction with Safaricom Foundation, the county is setting up three sanitizing booths, each at major entry points to Kisii county

“The spray booths and tanks will be operating as walk-through misting chambers-a system which enables a person to sanitize his/her entire self, thereby reducing the spread of the novel coronavirus which has affected all nations."

“The points were identified because we already have officers on the ground undertaking temperature screening and this is being done in up to 13 entry points where we have mounted roadblocks,” Kihara said, adding that the equipment is mobile.

Similar equipment is at the KTRH entrance, donated by Curamerica, an NGO supporting three facilities in the county.

The county has a total of 10 ventilators at the KTRH isolation and treatment Centre.