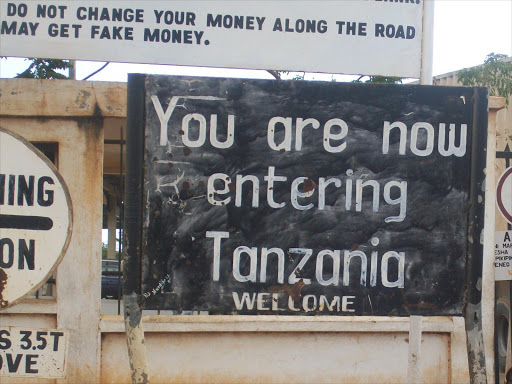 Entry point to Kenya at the Namanga border on the Tanzania side.

Tanzania has stopped all Kenya trucks from entering the county a day after President Uhuru Kenyatta ordered the closure of the common border with its southern neighbour to curb the importation of Covid-19.

The President also closed the border with Somalia.

He exempted trucks ferrying cargo but their drivers have to undergo compulsory Covid-19 tests and be declared negative before they are let through border posts.

On Sunday, in what appears to be a retaliatory move, Tanzania declared that “no vehicle from Kenya will be allowed to enter into the country”.

A Tanzanian official said at the Holili/Taveta One-Stop Border Post that goods from Kenya will be offloaded at the border posts from where well be picked by their respective recipients.

“Goods, particularly from Kenya, will be collected at the border,” the official told the media.

She said trucks from other countries might be allowed in depending on bilateral agreements.

Trade between Kenya and Tanzania which in normal times averages Sh38 billion per year has been severely affected by Covid-19.

Kenya sells goods worth Sh27 billion to Tanzania and buys Sh11 billion goods from the neighbour, according to Principal Secretary in the State Department for East African Community Kevit Desai.

In a clip shared on social media, the Tanzanian official added that goods from her country to Kenya will also be offloaded at the border from where they will be picked by their Kenyan owners.

On Saturday, President Kenyatta said the border closure was necessitated by an increase in the number of “imported” Covid-19 cases.

“In the past week, we have witnessed increased imported cases among individuals crossing into the country through our borders. These areas have become of grave concern,” he said.

Separately, Rwanda and Tanzania have reached an agreement after days of a stalemate during which Tanzanian truck drivers protested against measures put in place by Rwanda to avert cross-border transmission of the disease.

They agreed to stop the swapping of drivers at Rusumo border.

Kigali said goods entering Rwanda will be offloaded or transhipped at the entry point, except for trucks ferrying perishable goods and petroleum products.

The two countries also agreed that to prevent further spread of Covid-19, truck drivers will have to undergo mandatory testing at the starting point and facilitated by Tanzania.

Rwanda ordered mandatory tests of truck drivers at its borders. Goods would be offloaded and reloaded on other trucks at Rusumo and transported by local drivers to Rwanda.

This resulted in protests from Tanzanian officials and truck drivers.

“Rwanda has introduced tough and unrealistic measures to the industry which will disrupt the entire supply chain and undermine the efficiency, seamlessness and cost-effectiveness of cargo transportation in the region,” Tanzanian Truck Owners Association said in a statement.

The association demanded that its drivers be allowed to proceed with trips to their destinations if they test negative for Covid-19.

It also demanded that those found to be Covid-19 positive be replaced by their own chosen drivers to proceed with the journey instead of Rwandan drivers.

More than 1,000 trucks destined for Rwanda had been stuck at the Benako border town after Tanzanian truck drivers refused to comply with Kigali’s demands.