Now deliver, if I was the stumbling block, Murkomen tells Uhuru

Senator claims Speaker's decision to effect the changes was made under duress.

• Murkomen took the chance to take a swipe at President Uhuru Kenyatta who chaired the State House Meeting that led to his ouster, accusing him on not being truthful to the House.

by JULIUS OTIENO Journalist, Political and Parliamentary Reporter
News
12 May 2020 - 12:56 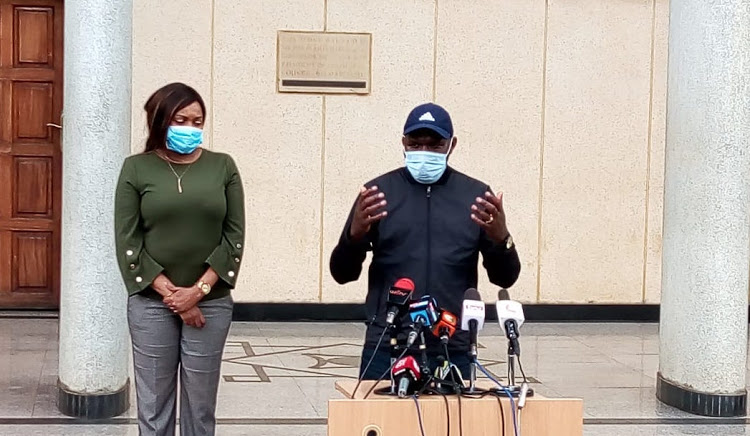 Elgeyo Marakwet Senator Kipchumba Murkomen has challenged President Uhuru Kenyatta to now deliver to Kenyans after he was ousted as the Senate Majority Leader.

In a stormy Senate session on Tuesday, Senate Speaker Ken Lusaka effected the changes where Murkomen and Nakuru Senator Susan Kihika were formally axed from their roles as Majority Leader and Whip respectively.

However, the Speaker's communication did not go down well with Murkomen who claimed that Lusaka's decision to formally oust him as Majority Leader was made under duress.

"Mr Speaker, this is not your decision. You made this decision under duress and undue influence and I am sorry you had to do it. Thank you, Mr Speaker," an emotional Murkomen said.

The Senator said the decision was not reasoned despite the Speaker said he would give a reasoned ruling later.

"Mr Speaker, will all those remarks, I just want to say this, I know you will say the conduct of the speaker is being put in doubt, you're my friend, I have known you long, you've been a DC in my place, I knew you when you were Governor, I defended you here when Orengo and Wetangula wanted to bring Senate documents against you," he added.

Murkomen took the chance to take a swipe at President Uhuru Kenyatta who chaired the State House Meeting that led to his ouster, accusing him on not being truthful to the House.

"I want to tell the president to stop lying to the Senate. You said you will give Senate Oversight Fund. Give them. If Murkomen was the problem, he is now not there. Sign all the bills!" the Elgeyo Marakwet Senator said.

Murkomen took issue with the Speaker's decision despite an earlier interim order by the Political Parties Dispute Tribunal which stopped the Jubilee Party from executing its coalition agreement with Kanu.

The interim order also restrained Tuju and Dzuya from making any coalition agreements on behalf of the Jubilee Party without a valid, formal resolution of a duly convened National Executive Committee.

Murkomen on the floor of the House took issue with the number of Senators present at the State House meeting disputing the figure of 20 that the Speaker said were present according to the minutes.

"How you choose to treat to this information, Mr Speaker is out there for history to remember that at such a time as this when the country was faced with such a serious pandemic as we are dealing with, people sat somewhere, made forgeries and we are about to sanction it as a house," he said.

"We will go down so badly, Mr Speaker. I plead with you, as you make your decision, to tell us the truth about what happened. Establish for us who attended this meeting, who are these alleged 20 senators that met?"

Lusaka said he had received communication from the Jubilee Coalition from the Office of the Deputy Majority Whip Irungu Kang'ata dated May 11, 2020.

The Speaker said his communication said that Kanag'ata's notice was accompanied with minutes of the State House meeting and the duly list of 20 senators who attended.

Other documents furnished to the Speaker were the post-election coalition agreement between Jubilee and Kanu and a confirmation from the Registrar of Political Parties dated May 8, 2020.

"The agreement purportedly signed by the two parties and deposited is null, void."
News
2 years ago

How Uhuru plotted coup against Ruto

Ruto allies say deal is null and void because it was not sanctioned by the NEC.
News
2 years ago
by JULIUS OTIENO Journalist, Political and Parliamentary Reporter
News
12 May 2020 - 12:56