23 Kenyans have died abroad, and 32 locally

• Diaspora deaths are 10 in the USA, UK six, Italy two, and one each in Switzerland, Saudi Arabia, Sweden, South Africa and France. 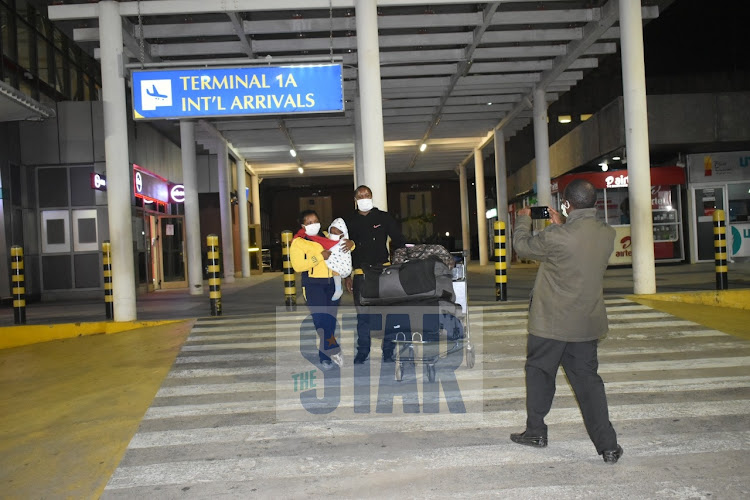 Kenyans pose for a family photo after landing from Hyderabad, India where they had gone for treatment at JKIA, Nairobi on May 7, 2020.
Image: ANDREW KASUKU

The government has evacuated 744 Kenyans who were stranded abroad since the country stopped incoming international passenger flights.

The Foreign Affairs ministry said the largest number of evacuees was 233 from India.

"The ministry was only facilitating those stranded because of the suspension of international travel by many countries and can pay for their tickets," the ministry said in a statement.

The rest came from Sudan (nine), three from Turkey and one each from Ethiopia and Somalia.

The ministry further said 23 Kenyans have died of Covid-19 abroad.

These are not counted among the 32 local deaths announced on Sunday by the Ministry of Health.

The deaths are 10 in the US, the UK (six), Italy (two) and one each in Switzerland, Saudi Arabia, Sweden, South Africa and France.

Further, 191 Kenyans living abroad have been infected with the virus.  Some 77 have recovered, while 86 are in hospital — four of them in ICU

"It is estimated at about three million. Despite all these challenges and problems, the Kenyan diaspora is holding out well," MOFA said.

The government also announced the highest recoveries from the coronavirus within Kenya on Sunday.

He said 1,056 samples were screened, bringing the total 32,097. He spoke during the daily national briefing.

The samples were collected from the people in quarantine facilities and from general surveillance.

From the tests, 23 new Covid-19 cases were confirmed, raising the total to 672. Aman said 22 were Kenyans, while one was Burundian.

Aman said 20 of the cases were picked up by the surveillance team, while the other three were from mandatory quarantine facilities.

The four cases in Nairobi were from Umoja (two) and one each from Komarock and Pipeline.

In Mombasa, eight patients were from Mvita, while Kisauni and Likoni had two patients each.

The new cases were aged between one and 80 years. Thirteen were male and 11 female.

The CAS said two more patients lost their lives in Mombasa, bringing the number of deaths to 32.

During the briefing, the CAS urged Kenyans to continue adhering to the measures set by the government to flatten the curve.

Aman added that the observation from other countries shows that behavioural factors in addition to other interventions play a big role in slowing down the infection.