'CAN'T LOCK US DOWN'

• Some residents believe there is more to the containment directive than the coronavirus.

• “This is just revenge from some leaders because Old Town residents did not say yes sir to them and rebelled,” said Muhsin Ahmed, another resident says. 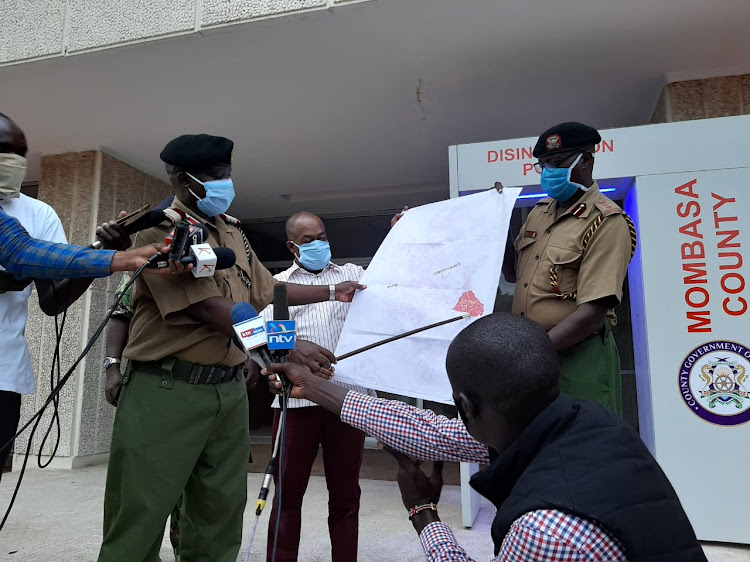 THIS IS THE AREA Mombasa county commissioner Gilbert kitiyo displays the area under containment to journalists outside his Uhuru na Kazi office on Wednesday evening.
Image: BRIAN OTIENO

Hundreds of Old Town youth on Wednesday moved out of the area to avoid being caught up in the cessation of movement order.

The youth, according to sources, moved to Majengo, Kisauni, Likoni and areas in Nyali subcounty.

“As soon as I heard about it, I moved out. They will not make me stay in one place,” said Soud Ahmed, a resident.

Some residents believe there is more to the containment directive than the coronavirus.

“This is just revenge from some leaders because Old Town residents did not say yes sir to them and rebelled,” said Muhsin Ahmed, another resident says.

He alleged the county government is bitter with Old Town residents because they started defying and insulting it on social media.

On Wednesday evening, Mombasa county commissioner Gilbert Kitiyo said those who moved out of the area are risking the lives of their relatives.

“It is of no use to move out of the area. Because if you have the disease then you are just transmitting it to your relatives or friends and you are going to infect them, which is not fair,” said Kitiyo.

No public transport allowed in the areas for 15 days.
News
1 year ago

The place under containment includes Makadara Road all the way to where the road meets Nkrumah Road and to Fort Jesus.

This means the Bims Towers, TTS Towers, all buildings along Nkrumah Road are not under the containment area.

Makadara ground is not under the containment area because it is on the other side of Makadara Road.

According to the map shown by security agencies, Bondeni area is not under containment.

Police will be deployed to man all the roads into Old Town.

All eateries have been closed.

Markiti market, famous with tourists, has also been closed.

Speaking to the press outside the Uhuru na Kazi building on Wednesday evening, Kitiyo said Old Town residents should not take this as a punishment.

“These are measures to control the spread of the coronavirus,” said the county commissioner.

It is now the epicentre of Covid-19 in Mombasa, which has seen at least 159 cases recorded.

Kitiyo said basic services will continue being given.

“Water vendors will be allowed in and out of the containment area because water is an essential commodity,” said Kitiyo.

Those seeking medical services in emergency cases will also be allowed in and out.

He said minimal movement within the containment area is advised.

Business people and leaders in Old Town however decried the measure saying it was abrupt.

“I have people who work in my shops but do not live in Old Town. Now they will not be coming to work for 15 days,” said Abdalla, who is the Amani National Congress Coast vice chairman.

Kitiyo said those working in Old Town but do not live there will have to stay at home for the 15-day containment period.

Mvita MP Abdulswamad Nassir however faulted the timing of the order saying they gave it on the day Parliament went for recess.

“It is ill-timed,” said Nassir.

He however said the security agencies should have consulted the leadership of the area before implementing the order.

“We were not consulted. Mvita is very small. Now you will discover that everybody is related to everybody. People have moved to other areas like Majengo and Mvita,” said Nassir on phone.

The MP however said he is waiting to see how the security officers will implement the containment.

The decision to exclude some parts of the actual Old Town also baffled Nassir.

“If it is Old Town as an area, it includes Bondeni area and reaches Allidina High School,” said Nassir.

However, this is not under the containment area according to the map displayed by Kitiyo.