• Health CS Mutahi Kagwe on Tuesday said Eastleigh was a hot spot, with all the 29 Nairobi cases for the day coming from the area, raising the number to 63. 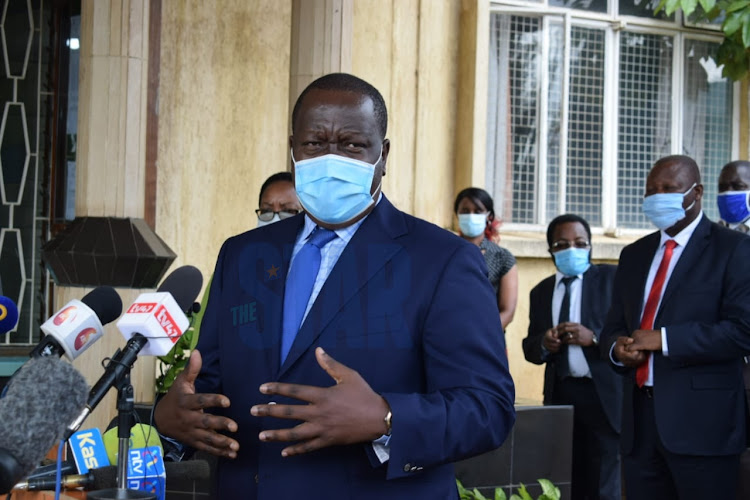 The government has warned of a possible lockdown, citing indiscipline among Kenyans.

Interior CS Fred Matiang'i on Wednesday said, "We have been warned several times about our behaviour especially in certain estates in Nairobi and in Mombasa. Government is putting forward scientific information- let’s change our behaviour".

"Now, we are going to be forced to have to do certain things that we ourselves as government didn’t want to do to secure the lives of our people and, especially, the lives of innocent Kenyans."

Matiang'i made the statement during a briefing on the flood situation.

At least 194 Kenyans have been killed by floods occasioned by heavy rains in the last three weeks, Devolution CS Wamalwa said.

Matiang'i's statement comes a day after Kenya recorded its highest number of Covid-19 cases -45 - since the first was confirmed on March 13.

Health CS Mutahi Kagwe on Tuesday said Eastleigh was a hot spot, with all the 29 Nairobi cases for the day coming from the area, raising the number to 63.

An imam with the coronavirus kept spreading it in Eastleigh, Nairobi until he died last month.

The cleric, who lived in the area, had tested positive for Covid-19 and died on April 16. He was buried the same day.

Despite knowing his status, the imam continued praying in mosques and visiting different houses.

"This was a reckless and irresponsible act by the imam," Kagwe said.

The government on Wednesday said that it will evict Tana River and Garissa residents who have refused to move to higher grounds as floods cause destruction in the  area.

"We have an operation and we are moving people away from danger and that level of alert will be addressed until we are out of danger. If we don't move people along water bodies it will be disastrous. We have no option but to move those who live there by force," Mating'i said.

Kagwe had expressed frustration at crafty Kenyans who are ordering as little as a sausage accompanied with two beers to work around state directives for eateries.

This translates to, "Some are ordering just one sausage and two beers. They then hop into another restaurant and do the same. Others order oranges and two beers that are supposedly the dessert."

The state gave strict directives for reopening of restaurants two weeks ago. Bars have not been allowed to reopen, but eateries are allowed to serve alcohol within strict guidelines.

One of the directives was that beer can only be ordered when accompanied by a meal, and even then, it must be taken with the meal or up to 30 minutes after the meal.

Rainfall is expected to continue over most parts of the country until June.
News
2 years ago

State released more than 40,000 bags of rice and non-food items.
News
2 years ago
Post a comment
WATCH: The latest videos from the Star
by CLAIRE MUNDE Digital Sub-editor
News
06 May 2020 - 14:01
Read The E-Paper