Witness said he knelt down and begged police not to hurt him, body dragged into open

•His wife said he had left to go to the public toilets and buy dinner. 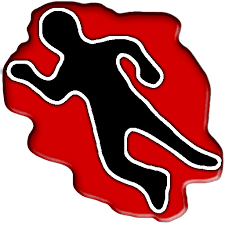 It was a few minutes past 6pm and Vitalis Owino had to answer a call of nature, then quickly pick up some food for his family in Mathare.

It was a bad decision - everyone should have eaten cold mandazi.

Vitalis knelt down and pleaded with two officers to allow him to proceed, a witness said. He was weak, unable to flee with his friends.

Instead, he was fatally bludgeoned to death on Sunday night, a witness said.

On Monday, Mathare residents protested what they called the police killing of an innocent man heading to the toilet.

Police said they were investigating the death.

Residents said Owino, 36, was walking from Mradi towards Number 10 area when he was accosted by the police.

“I saw him (Owino) walking with another man who took off when he saw the cops together with other people.

"Owino was unable to run, he knelt down and pleaded with the officers to allow him to proceed," a witness said.

The witness said that as he himself was hiding between two kiosks, he saw the officers pull Owino and heard him screaming and begging the officers to stop hurting him.

“I could not see them after they moved to a darker place but I could hear the whipping and screaming,” he said.

Owino's widow Esther Achieng’ said her husband left the house some minutes past 6pm to buy them food for dinner as he went to the toilet, which is a few meters away from their house.

“We do not have toilets where we stay so we walk to Mradi where there are some public pay toilets. He said he needed to go there and would bring supper with him on the way back," Achieng' said.

At around 7.30pm the mother of four begun making frantic calls to find out where her husband was but his phone went unanswered.

Finally, she prepared black tea and leftover mandazis from her business for their two young children who had begun dozing off.

Achieng’ kept calling until the phone went off at around 2am.

At 5am, Achieng’ said she was informed Owino was dead.

“I lost it, I did not wait to get the details, but there was no way to confirm the sad news,” she said crying.

Neighbour Beatrice Adhiambo said she was awakened by screams from Achieng’. Shortly after informing her that her husband had died, another neighbour informed them that there was a body found lying at Mradi area market.

“We rushed to the scene and confirmed that it was Owino. He was dressed in a long black shirt and black flipflops like his wife had described,” she said.

A man who claimed to have been at the scene at the time of the killing described a tall police officer wearing spectacles as one of the officers who beat Owino to death.

“I was going back home with a friend after drinking when we met two officers and saw a man lying on the ground still. When they stopped us, we obeyed since I was too drunk to run. They forced us to move the body,” he told the Star.

He said they carried the man to a nearby corner but the other officer ordered them to move it in the open where it was easily found the next day.

“We did just that and left. I could see one side of his face around the ear was swollen and he was bleeding. We didn't know him" he said.

Achieng’ was taken to the hospital after she collapsed after seeing her husband’s body.

“My husband drinks but since the curfew, I have made sure he comes back home on time. The only day he left, not even to drink, but to go to the toilet, he died,” she cried.

The body was taken to Muthaiga police station after residents blocked area police from picking it.