• Sonko’s spokesman says the sale is a “private issue” between the governor [and KRC]. 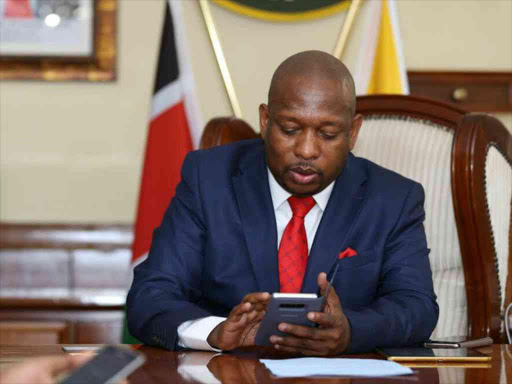 The Ethics and Anti-Corruption Commission has stopped the sale of a multi-million-shilling property said to belong to Kenya Railways Corporation to Nairobi Governor Mike Sonko.

The property in the upmarket Upper Hill Estate has been the nerve centre of Sonko’s political activities, more so after he was barred from accessing his City Hall office.

The Star has established that the EACC wrote to Kenya Railway boss Philip Mainga on Tuesday asking the corporation to freeze any deal on the property as it’s under active probe.

“The Commission is in receipt of information that Kenya Railways Corporation is in the process of selling one of the properties, a house situated at Matumbato Road Nairobi, to Primix Ltd,” EACC chief executive Twalib Mbarak said.

“This is to ask you to halt any intended sale as the matter is under investigations.”

A search done by the Star shows that Sonko’s wife Primrose Mwelu is one of  Primix Ltd's directors.

Her co-director is Mwajuma Hamisi.

The private office is known as Sonko’s command centre and is always a behive of activity with tens of guests walking in and out.

“That one I am not involved,” he told the Star. “That is a pension scheme project and my office is not involved at all.”

Sonko’s spokesman Ben Mulwa decribed the sale as a “private issue” that they would only respond to if required by EACC.

“This is a private engagement by the governor [and KRC]. So, he [governor] wouldn’t wish to comment on that,” Mulwa said.

Two months ago, the High Court froze Sonko’s 10 bank accounts with about Sh18 million after the governor was charged with Sh357 million graft. The EACC alleges he received millions of shillings in kickbacks in a garbage collection tender.

The Asset Recovery Agency argues there are reasonable grounds to believe that the cash was part of the funds stolen from the county government and intends to file a suit for the cash to be forfeited to the government.

At the time, the flamboyant county chief, known for wearing expensive gold chains argued that the court decision had grounded him financially and that he could not support himself or his family.

However, the governor has continued with his philanthropy, in what could signal that he still has a massive financial resources.

Just a week ago, Sonko was sending coronavirus care packages with bottles of Hennessy (cognac) to the poor.

He claimed that the World Health Organisation had advised that alcohol kills the virus.

“I think from the research conducted by the World Health Organisation and various health organisations, it has been revealed that alcohol plays a very major role in killing the coronavirus or any sort of virus,” the Nairobi governor said.