• When the year began, the echoes of BBI rallies became louder with the process being held in different counties with leaders calling for a referendum. 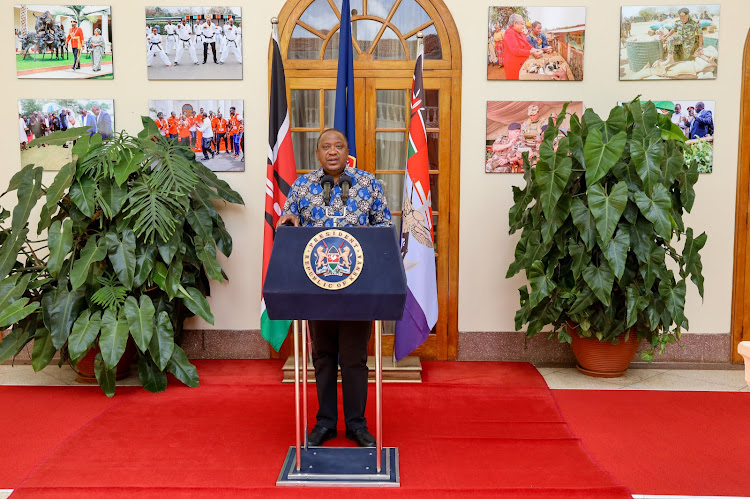 President Uhuru Kenyatta during his new year good will message gave a raft of programmes that he wanted to focus on in 2020.

This ranged from reforming the tea sector, coffee sector, corruption, bringing unity and reconciliation, focusing on disasters among other things.

But with the coronavirus pandemic hitting the world and almost bringing it to a stop, his focus and promises have stalled with some still hanging in the balance.

Here are some of the areas he promised to deliver in

During the New Year's message, Uhuru said he would provide support to Kenyans afflicted by natural disasters. Some of the most recent disasters have included the floods in Rift Valley as well as the locust invasion.

He noted that the government had mobilised funds and made available Sh5.2 billion to provide relief food supplies, undertake a resettlement programme for the displaced communities, support reconstruction of homes that have been destroyed, address health concerns and reconstruct critical infrastructure, including water supplies.

Uhuru also said that he is closely monitoring the implementation of this disaster recovery operation to ensure that the affected households are able to regain some stability as soon as possible.

"If you have any concerns about the implementation of the programme, I encourage you to share it with your county administration," he said.

It has been barely five months since he said this before the long rains struck the country, killing more than 29 people and displacing hundreds.

Rift Valley Regional Coordinator George Natembeya said each family that lost their loved ones during the landslides and floods along Marakwet Pokot border will be given Sh50,000

He said the money is to cover burial expenses, adding that the government will also pay for DNA tests to identify the bodies and body parts found during the search.

During the address, Uhuru said Kenya was alive and ready for the new consensus through the BBI process.

He said in the process of renegotiation, no voice will be wrong and all will be heard. "The BBI process is inclusive, it should spell the end of ethnic majoritarianism."

"We are on a path to end the cycles of election crises. This is the only path to winning the economic kingdom," he said.

When the year began, the echoes of BBI rallies became louder with the process being held in different counties with leaders calling for a referendum.

But no sooner had the rallies began to pick up steam than the coronavirus pandemic happened and the process had to be halted almost immediately.

This put a strain on the president and ODM leader Raila Odinga's efforts to bring unity and reconciliation to Kenyan citizens.

A common refrain from governments and health authorities across the globe concerning the pandemic is to stay away from public places and do the necessary to protect yourself, your family and those around you.

Social distancing, the new medical parlance to describe what we all should do, makes sense and must be adhered to by everyone.

This is the first defence against this pandemic, the rest is for governments and health professionals to make happen.

And this also put a strain on the BBI's budget. The government reportedly transferred funds from the Sh11 billion kitty meant for the Building Bridges Initiative rallies towards the fight against the coronavirus.

The money will be used to manufacture masks, ventilators and build ICU facilities in select hospitals throughout the country.

The President had hoped to make the war on graft one of his legacy projects.

During his address, Uhuru renewed his pledge on this fight, adding that he will not turn to the right or to the left.

"I will not soft-pedal or backpedal. I will make no covenants with evil doers or show mercy to those who rig our markets to enrich themselves," he said.

The pandemic has however slowed down the process since March 13 when the first case was announced by CS Health Mutahi Kagwe.

The Judiciary resolved to scale down all the Judiciary public-facing operations in compliance with the recommendations of the National Emergency Response Committee on coronavirus.

All the stakeholders in the justice sector adapted to the emerging challenges and have taken various actions, both individually and collectively, to ensure that they prevent the spread of the virus while also ensuring that the sector continues to render essential services to the people of Kenya.

This has made it hard for warrants of arrest to be issued.

The Judiciary in a notice said that execution of warrants of arrest, court decrees and orders made prior to March 15, 2020 is suspended until further notice.

"The Police, Court Bailiffs and Auctioneers are, in the circumstances, instructed not to carry out execution of warrants, orders or decree issued before March 15, 2020."

The Corruption Perception Index (CPI), which was released by Transparency International in January, shows that Kenya has only moved one step, from a score of 27 points out of 100 in 2018 to 28 in 2019.

A score of zero means highly corrupt and 100 is “very clean”. According to the report, this score is below the global average of 43 and Sub-Saharan average of 32.