• Treasury also says it has provided Sh10 billion in tax refund and another Sh10 billion for the cash transfers for the elderly and vulnerable persons.

• The National Intelligence Service has also been given a Sh1.5 billion boost for their operations, to help in contact and case tracing. 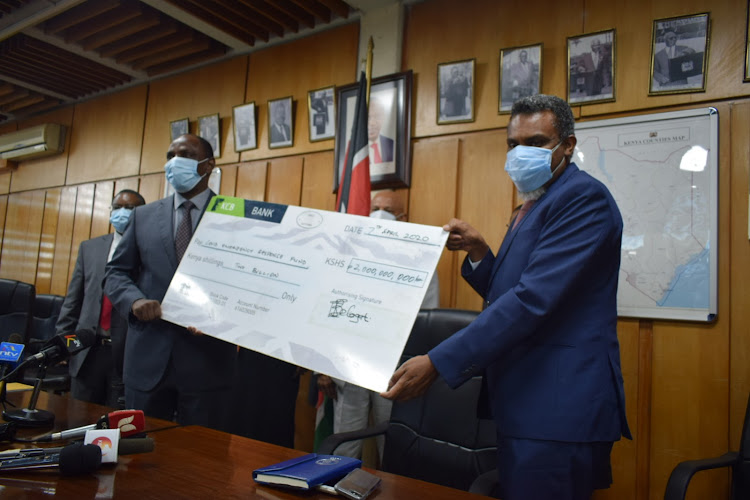 Treasury CS Ukur Yatani when he received a Sh2 billion cheque for Covid-19 mitigation from the Director of Public Prosecutions at Treasury building on April 7,2020.
Image: CHARLENE MALWA

The Treasury has allocated Sh40 billion as a response towards fighting the coronavirus outbreak.

Treasury has also disbursed Sh200 million to the Interior Ministry to tighten security operations to enforce curfew and containment directives.

Another Sh200 million has been provided for the Prisons department to mitigate the spread of the coronavirus in jails.

Treasury also says it has provided Sh10 billion in tax refund and another Sh10 billion for the cash transfers for the elderly and vulnerable persons.

The National Intelligence Service has also been given a Sh1.5 billion boost for their operations, to help in contact and case tracing.

Yatani further reveals that the Sh13 billion for SMEs support and payment of pending bills has been disbursed.

But the pandemic has presented expenses which were unforeseen during the budget-making process, eating up additional Sh385 billion.

These include requests for recurrent amounts of Sh152.9 billion and Sh233 billion for development, including Sh30 billion for donor-funded projects.

However, the Budget and Appropriations Committee approved a reduction in development allocation by Sh83 billion and Sh31 billion in additional recurrent expenditure.

Among the beneficiaries of the additional expenditure are university staff whose Sh6.6 billion 2017-21 CBA will be funded.

Doctors and lecturer’s allowances of Sh1.8 billion would be provided as well as Sh3.8 billion for Nairobi Metropolitan Services.

Sh1.25 billion will go towards the reconstruction of damaged roads, bridges, and other related infrastructure – mostly destroyed during the rainy seasons.

Sh1.2 billion will be provided for the construction and rehabilitation of water pans in arid and semi-arid areas.

The government further intends to spend Sh1 billion to roll out the issuance of third-generation identity cards.

Sh700 million will be provided for the Ewaso Nyiro Development Authority under the drought mitigation programmes.

The Lands ministry will get Sh662 million for the digitisation of land records while another Sh551 million has been provided for maintenance works on the national fibre optic infrastructure.

Sh450 million will be provided to the Defence Ministry to boost the food processing capacity of their factory at Gilgil.

State House operating expenses have also increased by Sh400 million while Sh300 million will be provided for the coast development authority for dam works.

Yatani agrees that the situation is not rosy in the face of underperformance of revenues exerting pressure on the increased demand for resources.

At the same time, domestic taxes have shrunk due to declined incomes and low consumption of goods following the containment orders affecting Nairobi and three other counties.

As of March, the government had a Sh132 billion revenue shortfall from its target, also destabilised by the pandemic.

“The shortfall in ordinary revenue collection from a target of Sh132.3 billion was recorded in all broad categories with excise taxes recording a shortfall of Sh35.2 billion,” Yatani said.