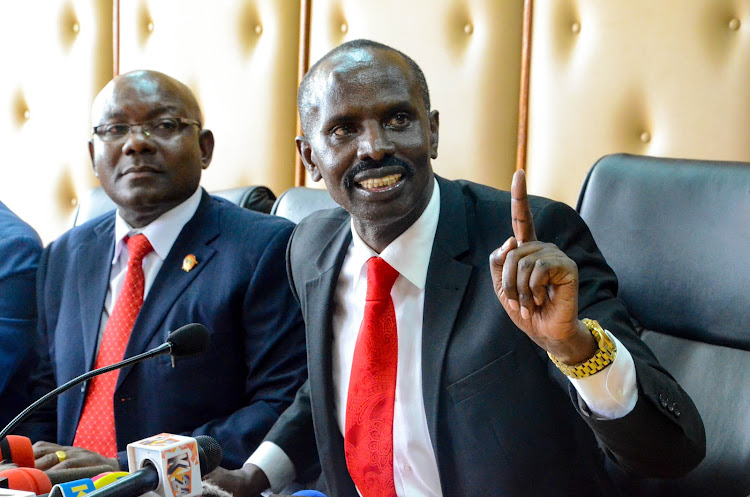 Criticism is piling on the Ministry of Education for its decision that pupils learn from home using online platforms as schools remain closed because of Covid-19.

Kenya National Union of Teachers secretary general Wilson Sossion said online learning was not effective and would not work in Kenya or in other developing countries.

“What is being aired through the media is not effective at all as it reaches about 10 per cent of learners. It is merely wishful thinking,” he said.

Kenya National Association of Parents, however, said online learning for Kenyan pupils was possible to some extent.

“Access to the internet is the main challenge. Very few learners have computers and can access the internet,” he said.

George Omondi, a professor of human resources at the University of Nairobi, said their infrastructure was inadequate to support online learning.

Omondi noted that unequal internet access in the country would lead to discrimination should institutions go the online way.

“It is something we are not prepared for. Another critical issue is students who need to conduct practicals. How do they go about it online?” he said.

On March 18, Education CS George Magoha announced that radio, TV, Youtube and the Kenya Education Cloud would be used to deliver the school curriculum to the over 15 million learners who were sent home.

A section of Ukambani leaders led by Mwingi Central MP Gideon Mulyiungi called a press conference on Monday to talk about the challenges of online education but the event never took place.

Sossion said lessons being aired were not effective as it is not known how many pupils and students were being targeted by each platform and how many were reached.

“Online learning can only reach 10 per cent. What is happening with the rest 90 per cent?” he asked.

Speaking during an interview with a local television station, he said online learning may not work at all for children from ordinary households.

“Let us look at the ordinary household in Kenya. Do they have a radio and television and even if they do, how do we ensure connectivity and interactive learning?” he wondered.

Sossion said the laptop project failed, which means that the country cannot talk of moving close to online learning.

“The best we can do now is to support government interventions to stop the spread of the Covid-19. Magoha must listen to us and must consider our suggestions,” he explained.

Sossion added that the government should not hesitate to put in place tougher measures, including lockdowns in hotspots so that the country can take a shorter time to slow the spread of the disease.

“Government should direct resources to specific areas of combating the disease to flatten the curve. The best way is to control the virus then we will be able to plan on when to resume learning,” he said.

The Ministry of Education has partnered with the Kenya Broadcasting Corporation to broadcast radio programmes from Monday to Friday through Radio Taifa and English Service.

For television learning, lessons are transmitted through the Kenya Institute and Curriculum Development (KICD) Edu-Channel TV.

Students can also access digital content from all KICD approved materials from the Kenya Education Cloud on www.kec.ac.ke.

In the wake of the pandemic, private schools have been turning to online classes to generate income from fees.

Top private schools have reached an agreement with parents to charge fees for teaching students online.

Kenya Association of International Schools coordinator Jane Mwangi said many schools will be reopening the coming days. She said most private schools will be reducing fees by 15 to 30 per cent as students will not be using facilities provided by the schools.

There are more than 1,932 private secondary and 8,000 private primary schools in the country.