Chief Magistrate issued an arrest warrant after the blogger failed to appear in court.

• In a Twitter post on Tuesday evening, the DCI said Nyakundi is being sought following a warrant of arrest from the Chief Magistrate’s Court Milimani.

• Nyakundi took to Twitter to defend himself arguing that he has never been ordered to appear before the Milimani Law Courts. 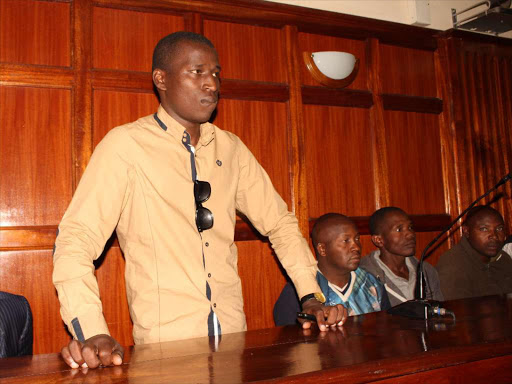 Blogger Cyprian Nyakundi at a Milimani court on on February 01, 2018.
Image: COLLINS KWEYU

Kenyan blogger Cyprian Andama Nyakundi is now a wanted man after he failed to show up in court to be charged.

Nyakundi is being sorted by the DCI detectives from the Nairobi Regional Criminal Investigations Office.

In a Twitter post on Tuesday evening, the DCI said Nyakundi is being sought following a warrant of arrest issued by the Chief Magistrate’s Court Milimani.

He allegedly failed to appear before the court to answer to charges of publishing false information concerning the death of a senior official at the Kenya Revenue Authority (KRA).

The blogger had said KRA official died of Coronavirus.

He has been advised to report himself to the nearest police station.

"The order follows a case of Publication of False Information Contrary to Section 23 of the Computer Misuse and Cyber Crime Act filed against him by a complainant. Mr Nyakundi is hereby ordered to present himself at the said office or at his nearest Police station immediately," read part of the tweet.

Nyakundi took to Twitter to defend himself arguing that he has never been ordered to appear before the Milimani Law Courts.

"I know before you appear in court for plea taking in criminal matters, there must be fingerprints, etc. Nothing! Arrest warrant shocking," he said.

"I would like @DCI_Kenya, @ODPP_KE, and @dkmaraga to investigate how a warrant of arrest has been issued against me yet I have never been processed to appear at the Milimani law courts for plea over a post that a KRA manager died of Covid19".

He pleads not guilty before Milimani senior resident magistrate Kennedy Cheruiyot
News
3 years ago
Post a comment
WATCH: The latest videos from the Star
by SHARON MAOMBO
News
21 April 2020 - 23:48
Read The E-Paper