Seven employees have been confirmed positive for coronavirus

• Some 64 KPA staff are being held at quarantine facilities. 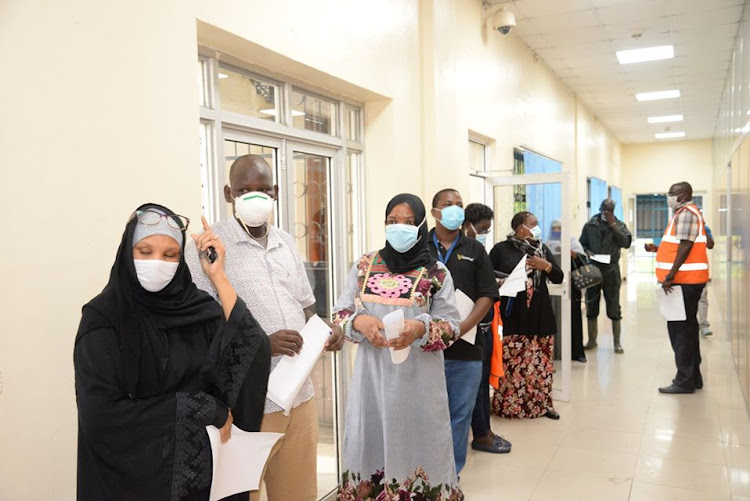 Coronavirus testing for all employees of the Kenya Ports Authority began on Sunday after more than half a dozen staffers were found positive.

On April 16, KPA announced that seven of its over 5,000 workers had Covid-19 and over 64 others under quarantine at facilities in Mombasa.

Four of the confirmed cases were KPA employees, while three are contracted cleaners working at the port.

The patients are admitted at the Coast Provincial General Hospital.

Two staff members have already lost their lives to the disease.

All 157 employees under the medical department at the port of Mombasa have already been tested.

“We are happy to note that so far the results for all the first 42 employees in the medical department were negative. The rest are still awaiting theirs,” Salim said.

He said they have also installed 107 handwashing points with antiseptic soap and placed sanitiser dispensers at various areas.

“We are also checking temperatures of all those entering the port to detect any suspected Covid-19 patients,” Salim said.

All ships docking at the port are also required to follow the health protocols.

“On the seaside, we have put in place strict measures in conjunction with the Port Health to ensure all necessary protocols are observed by ships scheduled to call at the Port of Mombasa,” he said.

At all the entry gates, buildings, offices and operation areas, staff are regularly issued with face masks.

At the Bandari clinic, isolation rooms have been set up where suspected patients are held waiting for public health officers to pick them up.

“More rooms are being prepared for this purpose,” he said.

KPA’s operations general manager William Ruto said so far, no crew of any ship calling at the port has tested positive for coronavirus.

He said all ships are required to declare their crew's health status and the last 10 ports of call.

“Those that came from countries infected by coronavirus are subjected to rigorous inspection and crew are not allowed to get off the vessel,” Ruto said.

KPA has also released staff aged above 58 and those with pre-existing medical conditions to work from home.