Quit or we eject you out of office, Jubilee MPs tell Tuju

• According to the members, mostly leaning towards Deputy President William Ruto’s camp, Tuju is the cause of wrangles and poor leadership. 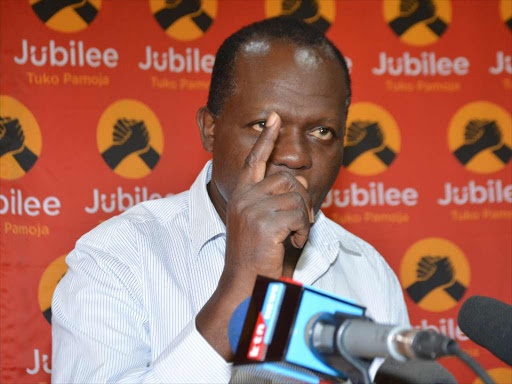 ON THE SPOT: Jubilee Party secretary general Raphael Tuju during a past press conference at the party headquarters in Pangani, Nairobi
Image: FILE

The Registrar of Political Parties Ann Nderitu, in a letter to Tuju on Friday declined to add five new members to the top decision making organ.

And now, party MPs most of whom wrote to the registrar protesting Tuju's proposed changes have demanded that their party boss quits.

Majority Leader in the National Assembly Aden Duale said it is time for the leadership of the ruling party to put its house in order.

He said they will file petitions for Tuju's removal if he cannot quit on his own. Tuju will forcefully be dragged out of office if the situation escalates, the lawmakers threatened.

The members, a majority of whom are Deputy President William Ruto’s allies, blamed Tuju for the wrangles in Jubilee.

Kimilili MP Didmas Barasa said Tuju should relinquish his position as the interim secretary-general since his term ended in March.

“We are no longer interested in his services. He has become the source of problems. In the days to come, we will be filing petitions for his removal if he cannot leave on his own and when the situation escalates, we will literally drag him out of the office,” Barasa said.

He added, “Tuju is a Cabinet Secretary without portfolio. He is paid twice by the taxpayer - as a CS and as the secretary general of the Jubilee party. In more advanced democracies, he should have quit after falsifying the minutes of a meeting that never took place. This is a major crime.”

Duale however struck a more reconciliatory note and told party members to put their house in order.

He claimed the actions of Tuju and his “masters" almost made the party look like a private entity where persons can follow their own whims depending on the mood of the day to change officials as and when they desire.

“We must not forget this. Let's put our house in order. We owe it to the people of Kenya. Tuju and his cabal must be told to their face that Jubilee is not their personal property and all decisions going forward must be made by the respective party organs in accordance with the party constitution,” Duale said.

He thanked the registrar for rejecting the list based on the objections raised by members saying he is looking forward to resolving the matter through internal mechanism.

Duale criticised Tuju for “taking the party back to the old days” noting that the reason President Uhuru Kenyatta and Ruto founded JP was to end ethnic balkanisation.

“This we must not lose. We must not allow strangers, conmen, fraudsters and enemies of unity and peace to dilute the objective or negate it. We, the genuine members of the party must guard our guiding objectives with zeal. We owe it to the people of Kenya. We have no option but live to it,” the Garissa Township MP said.

“I, therefore, call upon the governing body, all internal structures of the party and all the members at the national and county levels to pull and work together towards a trajectory that takes us back to our founding objectives which are a united and prosperous nation.”

Party deputy secretary-general Caleb Kositany said they will push for the rule of law in the party saying it is no longer tenable for Tuju to stay.

“The President can retain him as the CS without portfolio but for us in the party, enough is enough. The rule of law must be respected, we now expect Tuju and his masters not to embarrass our party anymore, but to strictly be guided by the party constitution,” Kositany said.

Belgut MP Nelson Koech thanked the registrar for standing with the laws that guide the process of changes in political parties.

“She followed the law. She did not want to be dragged into petty party feuds. Her office, however, must come under criticism and focus for attempting to gazette a fraud,” Koech said.

Tuju has not spoken since the registrar delivered the ruling on Thursday. On Wednesday, the former Rarieda MP defended the changes saying minutes of the National Executive Committee were not required.

"To be more clear, those changes do not require any minutes. Those changes are premised on the transitional clause and that is what was sent to the Registrar of Political Parties," Tuju said.

Members are leaders of some of the parties dissolved to form Jubilee in 2016.
News
1 year ago

Ruto allies to move to court to force Jubilee elections

Kositany says they will hold elections immediately the Covid-19 pandemic is contained.
News
1 year ago