Tea farming is no longer a lucrative as it used to be.

• Small scale farmers have encountered untold suffering in the hands of the Kenya Tea Development Agency.

• KTDA is owned by 54 corporate tea companies that have extended by setting up satellite factories. 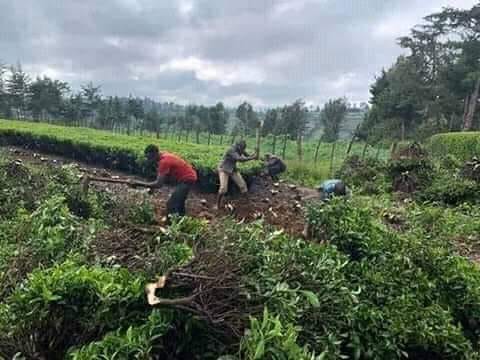 FED UP: A section of tea farmers in Nyamira's Tombe area uproot their crop on Friday in protest against poor bonus earnings Image: MAGATI OBEBO

The over 600,000 smallholder farmers spread across 16 tea growing counties in the country have toiled and moiled for years.

They have put their lives at the stake believing they will reap one day.

However, their hard work has often gone unnoticed and are scolded for being poor by their oppressors.

Tea farming is no longer a lucrative as it used to be.

Irked by the wanting state of affairs, President Uhuru Kenyatta on December 14, 2019 directed Agriculture CS Peter Munya and Competition Authority of Kenya to oversee radical policy and structural reforms to the tea sector, following an outcry by tea farmers.

The key focus was on ring-fencing farmer's incomes, instilling corporate governance and an overhaul of the leadership structure in KTDA, subsidiaries, and factories.

And Munya did not disappoint.

On Thursday, he announced that the draft regulations were ready, bringing good news to the eagerly waiting farmers, who now know the tide could soon change.

The Kenya Tea Sector Lobby has announced that good tidings are on the way.

It said small scale farmers have encountered untold suffering in the hands of the Kenya Tea Development Agency.

Under the new regulations announced by Munya, KTDA is set to lose its grip.

“This is a step in the right direction and the tea sector has another chance to be a leading source of foreign exchange and a major employer in Kenya,"Kenya Tea Sector Lobby chairman Irungu Nyakera said in a statement.

"These regulations will help close loopholes that East Africa Tea Trade Association has failed to implement for years, exposing the Kenyan tea industry to exploitation by cartels, to the costly loss of farmers,” Nyakera said.

KTDA is owned by 54 corporate tea companies that have extended by setting up satellite factories.

The satellite factories are 15 bringing the number of factories under smallholder farmers to 69.

Nyakera said tea farmers have embraced the proposal to have the sale of tea to the export market exclusively done through an electronic auction process so that is can be audited, removing opaqueness and loopholes experienced in the current trade.

Under the Crops (Tea Industry) regulations 2020, all tea buyers will pay in full for all teas they win at the auction before they take custody and lift the tea for export.

Nyakera said this will do away with instances of collusion between KTDA and farmers through credit sales, with some being written off as bad debts.

The funds from the sale of tea at the auction shall be remitted directly to the respective factory accounts within 14 days from the auction date.

Factories will be required to deposit at least 50 per cent of the funds to farmers' accounts within 30 days from receipt of proceeds, with the balance being paid as a bonus within the same financial year.

Previously KTDA would delay payments to farmers and place as interest-earning deposits with commercial banks.

“This would further expose tea farmers to predatory lending from financial institutions, against their tea proceeds, a practice that demoralised thousands of farmers,” he said.

To assure farmers of the income, the new regulations will also seek to operationalise a stabilisation fund to cushion farmers from price volatility.

Further, a registered tea broker shall offer brokerage services to a maximum of 15 factories, removing collusion between brokers and directors, leading to market monopolisation and farmers' tea would fetch lower prices at the auction.

Nyakera said to effect the overdue leadership overhaul in the sector, management agency agreement between KTDA and respective factories will be for tenure not exceeding five years.

The remuneration paid for such management service will be capped at two per cent of the value of tea sold per year, he said.

Each factory will either recruit an in-house company secretary or outsource the service, reducing the interference by KTDA in the running of individual factories.

Nyakera said the  lobby group is ready to receive the draft regulations for them to give feedback.