• Projects and activities state officers planned for the current financial year have been hit hard to unprecedented levels following the cuts.

• Treasury records further show that the Health Ministry targets to test and treat 100,000 persons for coronavirus. 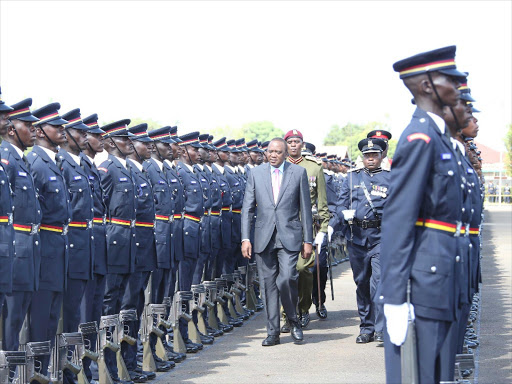 The government has scrapped the planned recruitment of police officers this year over massive budget cuts to fund the war on coronavirus.

This is the third year in a row that the government is calling off the recruitment, dashing the hopes of thousands of youths keen on police jobs.

The government intended to recruit at least 2,000 Administration Police and 1,000 GSU officers this financial year to enhance the capacity of the units.

In the new budget plan by National Treasury, the Ministry of Interior headed by Fred Matiang'i and which is in charge of the police is among the biggest casualties, his budget was slashed by Sh6.9 billion.

The proposals, which are awaiting the National Assembly approval, show that the government intends to reduce development spending by Sh98.7 billion.

There will, however, be an increase in recurrent spending by Sh24 billion.

The adjustments will deal a blow to the Executive, Judiciary, Parliament, and independent commissions.

The budget cut has also affected retraining of serving officers with only 500 set for induction from the initial 1,200.

The National Youth Service is also a casualty of the budget reductions.

The police kitting project, where officers were to be provided with equipment for improved security coordination, will not be rolled out this year as planned.

This is due to the reduction of non-financial assets budget by Sh1.2 billion and another Sh3.9 billion which was for coordination and support service to officers.

The Interior ministry’s plan to construct eight police stations gazetted last year has also hit a snag. Only two AP camps of the planned six will be built.

But claimants of pending bills owed by the Prisons may get a reprieve should MPs approve the Sh6 billion added to the department’s budget.

Stringent conditions, according to Cabinet sources, await those seeking payment of the bills owed since 2013.

Regardless of the increment, there will be fewer uniforms for prisons staff, no new irrigation systems and fewer inmates on formal education.

Plans for the construction of horse stables, acquisition of scanners and screening machines have been dropped this financial year.

The department has also vacated plans for constructing two hospitals and two dining halls as well as prison wards.

Facilitation of the DP and his spouse’s trips for local, regional and international engagements, should MPs approve the adjustments, will be reduced by half.

While Rachel sought to train 100,000 people on financial inclusion and entrepreneurship– table banking - she will only manage 13,000.

President Uhuru Kenyatta’s facilitation while on local and foreign trips will also be cut by half.

There will be only one SME’s Presidential roundtable this time around instead of the usual two.

Treasury is seeking to widen the austerity cuts in the effort to mop up funds for emergency response and stimulus reliefs for citizens.

Yatani told the Star that they target to raise Sh200 billion for the kitty – being monies from the budget cuts, voluntary pay cut contributions, and donations.

“We are raising Sh172 billion as a result of tax foregone. We are injecting additional Sh30 billion. Therefore, the cumulative economic package to cushion the economy is about Sh200 billion,” the CS said.

The funds will be managed by the Covid-19 Emergency Fund board chaired by EABL CEO Jane Karuku.

Owing to the need for more cash, the Foreign Affairs is proposed to let go of Sh1.2 billion, meaning fewer flights as well as reduced pace of refurbishing the country’s consulates.

However, the presidency has been allocated an additional Sh3.8 billion for the Nairobi Metropolitan Service in the measures to raise funds for Covid-19 emergency response.

Interventions in the Agriculture, Manufacturing and Housing pillars have been affected in the cuts.

Works on various technical training institutes (TTIs) are set to stall after the sector's funding was reduced by Sh3.1 billion.

The Government Press will also not be refurbished as was intended before the coronavirus pandemic.

Projects planned for residents of ASAL areas among them power generation using prosopis juriflora (mathenge) have been dropped.

The Health Ministry is set to relinquish Sh12 billion with the proposal reducing its allocation to Sh103 billion.

“The decrease in capital expenditure is mainly due to rationalisation of the budget,” the estimates show.

Yatani restated that to address the Covid-19, the ministry has been funded with an additional Sh3.9 billion.

This comprises of Sh1 billion for recruitment of health workers, Sh300 million for operations and Sh2.6 billion for development.

Prioritised in the revised budget is the construction and equipping of an integrated molecular imaging centre with guest accommodation facilities.

Treasury records further show that the ministry targets to test and treat 100,000 persons for the virus.

The Infrastructure department is set to receive an additional Sh44 billion, largely to cater for payment of pending bills.

A number of energy projects are also to lose Sh21 billion.

Owing to the changes, the Charles Keter-led ministry will drill only five wells at Bogoria geothermal project and targets less power from Olkaria I and IV.

For ICT, works to connect county offices with voice, video conferencing, and internet services has been affected.

The Judiciary is tipped to lose Sh1.7 billion of its budget in the proposed adjustments where the National Treasury intends to shed Sh35 billion.

This is set to affect works at Likuyani and Milimani law courts as well as the refurbishment of a number of non-residential buildings and courts.

If implemented, Parliament would have its budget adjusted downwards by Sh3.49 billion; being Sh2.5 billion from the National Assembly and Sh1.4 billion from joint services - Senate.

Treasury wants the IEBC budget reduced by Sh233 million and Auditor General’s by Sh287 million with the registrar of political parties tipped to lose Sh54 million.

In efforts to bolster tourism revival after the pandemic, the government seeks to renovate the KICC prefab centre and build the iconic Naivasha waterfront.

Yatani said the assumptions behind the cuts are that total revenue would be 18 per cent of GDP – about Sh1.1 trillion, and overall expenditure at 26.4 per cent.

Up to March 2020, the government had collected Sh1.3 trillion in revenue, a shortfall of Sh211 billion against net spending of Sh1.8 trillion.

A key focus area in relation to national budget management is budget credibility.
Business
2 years ago

Save your life, save others, stay at home!

Coronavirus is changing our lives. Accept the new way to avoid infection and transmission
News
2 years ago
by MOSES ODHIAMBO Journalist and Political Writer
News
16 April 2020 - 23:00