Do not ask for total lockdown, Mudavadi warns Kenyans 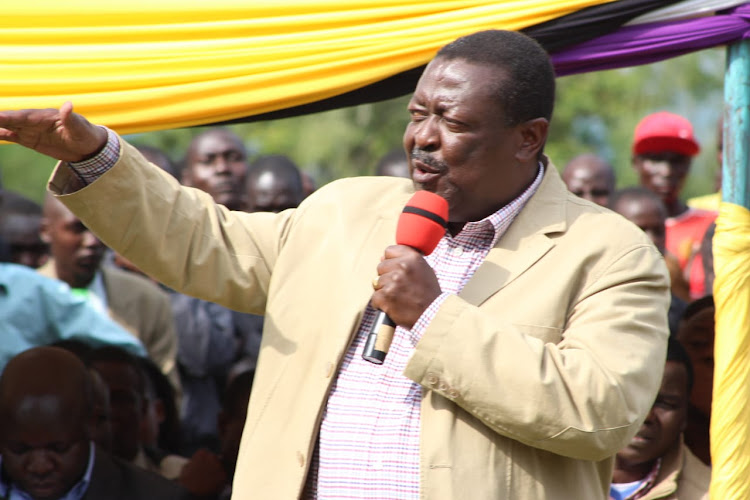 Kenyans should not call for a total lockdown but rather comply with all measures announced by the state to combat the Covid-19 pandemic, ANC party leader Musalia Mudavadi has said.

“Kenyans who were polled and suggested they favoured a lockdown perhaps don’t know what a lockdown means," he told the Star.

"With the partial lockdown of Nairobi, Mombasa, Kilifi and Kwale counties, I doubt the same Kenyans will vote for it again.”

He said a total lockdown means declaring a state of emergency where police will be overwhelmed by disorder and the army will have to be called in to help maintain law and order.

"We’ll be practically under martial law with overzealous armed personnel. Basic civil rights will be suspended during that period," he said.

"Therefore, Kenyans should not advocate for it at any cost. We must do all we can to prevent the spread of the virus by applying basic hygiene and thus avoid the declaration of a state of emergency."

He said the instructions given by the state were very simple: wash hands, keep physical distance and stay at home if you have nothing essential that you must travel and those who travel should wear masks.

"If we don’t keep these simple protection measures, then we are doing injustice to ourselves and creating more chances for the virus spread, which will result in a total lockdown," Mudavadi said.

“But I am not saying there might not come a time when we go under total lockdown."

Mudavadi said the way infection numbers were rising might lead to the decision.

During the lockdown, Mudavadi said, there would be no rich, poor, vulnerable, young or old, sinners or saved.

He said the virus had narrowed the gap between the poor and the rich, as the latter cannot jet out for medical treatment.

"This should serve as an eye-opener to us as leaders. We need to better our country with all the required equipment for the benefit of our people," he said.

Mudavadi’s opposition to a lockdown follows a poll that found nearly 60 per cent of Kenyans favour such a measure against Covid-19.

He said the lockdown of four counties was a clear indication of what might happen countrywide.

"We must have policies to govern a lockdown for various reasons. For instance, over 47 million people are going to be restricted from movement, without adequate food, water and access to healthcare," he said.

Kenyans will be caught away from their residences, meaning family separation until the lockdown period is over. The sick will not easily get to the hospital. The dead will not be buried. The living will run out of food and water. Anger will boil over.

He said Kenyans were already going through unstable times since the Covid-19 hit the country and has infected about 200 people.

The application of strict public health regulations and a night curfew has already proved to be a nightmare to many ordinary Kenyans.

"We are under a partial lockdown with public institutions, except emergency ones, closed; air and land transport grounded; the lucky few still on the payroll are working shifts from home; social places are shut down."

"A total lockdown will therefore only aggravate an already bad situation, with dire consequences," he said.

Mudavadi said the state should pay attention to the vulnerable members of society and support them well.

But he said Treasury was broke and it had exhausted its borrowing limit, which has made it difficult to pay salaries on time.

“The government must develop proper food storage and distribution channels as it will remain the provider of everything – something that few countries can do," Mudavadi said.

There should be enough security forces to enforce a lockdown without compromise but while observing basic human rights.

He further said millions of Kenyans were poor and lived from hand to mouth.

Those millions, he said, would become restless at the slightest provocation.

Hence, a nationwide lockdown will have very few supporters from a population that sees themselves as victims of the government.

Mudavadi said they would pour out into shops, stores, offices and schools grabbing what they assume to theirs.

"Developed countries across the globe have been able to enforce national lockdowns by co-opting a strong, patriotic and satisfied citizenry, with the support of the private sector," the ANC party leader said.

“I doubt here in Kenya we have such a private sector which can occasionally chip in when the country is facing rough times."

"Already the Kenya private sector is at the forefront of demanding tax rebates, indifferent to the fact every tax shilling is needed to fight the coronavirus scourge that is hitting us at the moment,” Mudavadi said.

The ANC leader said a stimulus program with a good dose of tax rebates across the board, especially for small scale entrepreneurs, should keep business afloat until the pandemic recedes.

Mudavadi said there was a quick need to recall Parliament through teleconferencing and Skype to legislate new measures and re-allocate budgets during the Covid-19 pandemic.

Mudavadi said the idea of Parliament being recalled physically at some point to regularise what government was doing was a terrifying thought.

Calls for urgent intervention, evacuation of Kenyans ejected from homes and hotels as disease carriers.
News
1 year ago

All lenders, not just China, should reschedule loans

So Kenya can meet huge costs of social protection and a stimulus package.
Opinion
1 year ago

Tells security officers not to use excessive force on Kenyans
News
1 year ago
by MARTIN OMBIMA OmbimaPatrick
News
14 April 2020 - 13:29