• The embassy said that its embassy in Beijing remains available to attend to any challenges that may arise and to do so in liaison with the Chinese authorities. 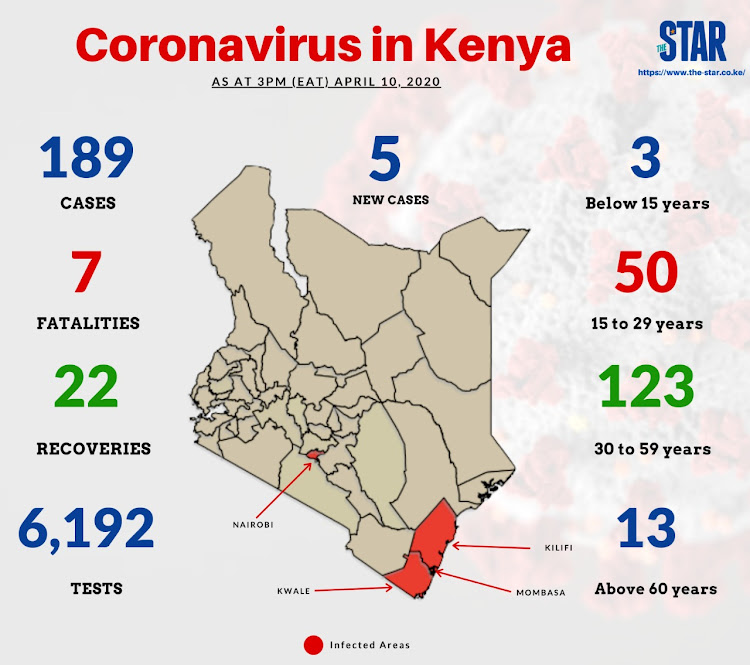 Coronavirus cases reported in the country as of March 10, 2020.
Image: The Star

The Foreign Affairs ministry has said it will work with the Chinese authorities to resolve the issue involving Kenyans being mistreated in China.

In a statement on Friday, the ministry said it was aware of a recent decision by the Government of China to undertake stringent testing of foreigners and Chinese nationals alike, to forestall imported and asymptomatic cases of COVID -19 in Guangzhou and other areas of China.

"Unfortunately, these measures have in some instances precipitated unfair responses against foreigners particularly of African origin, from some members of the local community in Guangzhou, especially landlords," the Ministry said.

"The Ministry has received assurances from the Chinese Embassy in Nairobi that the government of China takes a serious view of the situation and that the local authorities in Guangzhou have been tasked to take immediate action to safeguard the legitimate rights of the Africans concerned."

"In view of this commitment and cooperation we expect an early and comprehensive resolution of this matter to the benefit of Kenyan nationals in China," the embassy said.

The embassy said that its embassy in Beijing remains available to attend to any challenges that may arise and to do so in liaison with the Chinese authorities.

All Kenyans in China are therefore encouraged to remain in touch with the embassy either directly or through their Kenyan community leaders.

Globally, there has been an upsurge in terrorism and extremist violence.
Opinion
2 years ago

Test kits have been delivered.
Coronavirus
2 years ago
Post a comment
WATCH: The latest videos from the Star
by TRACY MUTINDA Lifestyle, Entertainment Writer
News
10 April 2020 - 17:53
Read The E-Paper