When elephants are present, soil depletion does not occur; the soil is enriched 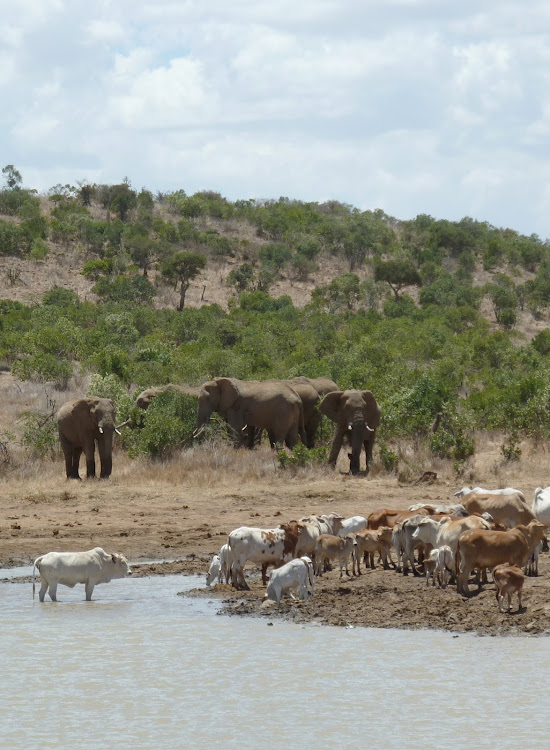 CO-EXISTENCE: In most African savannas wild herbivores such as elephants share their living space with domestic cattle.
Image: DINO MARTINS

Elephants play an important role in the management of the African savannah as they prevent soil from being depleted by livestock.

This is the conclusion of new research by the Vrije Universiteit Brussel in collaboration with the Mpala Research Centre in Kenya.

In the African savanna, wild herbivores are increasingly displaced by cattle, and that is not without consequences.

The research found out that where many cows graze, the soil becomes poor because the cows do not sufficiently fertilise the soil.

They mainly drop their dung at night when they are kept fenced-in to protect them from lions.

This impoverishes the soil, which reduces the productivity and quality of the grass.

However, when elephants are present, soil depletion does not occur; the soil is enriched.

The results have been published in the journal Nature Sustainability.

To examine the impact of cattle and wild herbivores on the soil, Dr Judith Sitters, under the supervision of Prof Harry Olde Venterink of the VUB Biology Department, collected soil and vegetation samples in the Kenyan savanna and analysed these for carbon, nitrogen and phosphorus concentrations.

She did this in collaboration with Prof Philippe Claeys of the VUB's Analytical, Environmental and Geo-Chemistry Department in association with American and Kenyan colleagues.

The soil and vegetation samples were collected in the Kenya Long-term Enclosure Experiment (KLEE), which was established in 1995 to examine the effects of various combinations of livestock and wildlife on the ecosystem.

"The preservation of these 'megaherbivores' is therefore not only essential for the maintenance of the ecosystem, but also for the food supply of the local population. As a consequence of soil depletion, less livestock can be kept in the long term," Sitters said.

The research indicates that in areas where cattle and elephants graze together, soil depletion is not only prevented but the soil is enriched.

Elephants bring down trees in the savanna, which accelerates the return of nutrients to the soil. But more importantly, elephants compete with cattle for the same available food, which results in less grazing by cattle.

This also means that cows export less dung away from the place where they graze, while dung deposition of wild herbivores is stimulated, which in turn feeds the soil.

The combination of domestic cattle and elephants can, therefore, be a form of sustainable management for African savanna.

Dr Sitters explained: “The largest herbivores of the African savanna, such as elephants and rhino, are threatened with extinction. That would first of all be a major loss for diversity in the animal kingdom, but it also has large implications for different ecosystem functions. Our research shows that elephants prevent soil depletion caused by livestock.

The research which was conducted in Kenya’s Impala Research centre is part of the postdoctoral fellowship project from the Research Foundation Flanders (FWO) of Dr Judith Sitters who works at the VUB Department of Biology in the group of Prof Harry Olde Venterink.

They found that over the years, as expected, cattle alone or with smaller wild herbivores reduced potential soil fertility by transferring carbon and nitrogen from the plants they consumed across the landscape during the day to dung deposited in their corrals at night.

This reduced the carbon and nitrogen found in the soil and was associated with plant forage of poorer nutritional quality.

Surprisingly, when megaherbivores, mainly elephants, cohabited with cattle these negative effects were reversed, with soil carbon and nitrogen restored to levels found when cattle were absent.

This result suggests that if humans, their livestock, and large herds of wildlife are to coexist, the megaherbivores must join the mix.

The specific ways that megaherbivores influenced soil carbon and nitrogen are still unclear, but Sitters et al. conjectured that most likely elephants knockdown, kill and eat trees, and thus recycle tree carbon and nutrients back into the soil where they replaced those transported by cattle to their night-time corrals.

The dominant trees in the study, whistling thorn acacias (Acaciadrepanolobium), are leguminous and have the potential to harvest nitrogen from the atmosphere through a symbiosis with root bacteria.

Elephants may, therefore ‘prime’ a pump that transfers nitrogen from the atmosphere to trees, to the soil, to forage plants and thence to livestock production.