•The government and the donors have pumped billions of shillings into training and reforming the NPS since the deadly 2007-08 post-election violence. 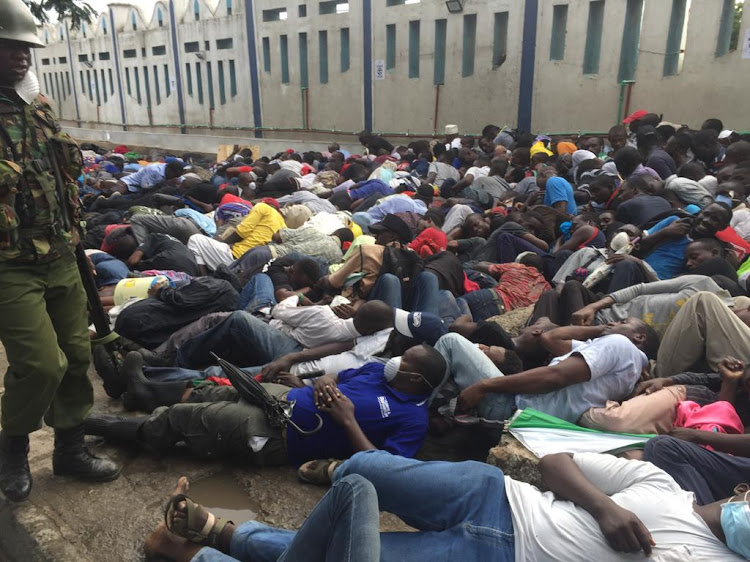 The fatal shooting of a 13-year-old Yassin Hussein Moyo and the cruel enforcement of curfew have exposed the brutality that still ill dog the police, despite years of attempted reforms.

Yassin was on the family balcony in Huruma, Nairobi, when he was shot apparently by the officers who were enforcing the 7pm-5am curfew imposed to curb the spread of the coronavirus. They had spotted some suspicious youths past curfew and fired indiscriminately, a source told the Star. Yassin was struck.

Meantime, images and clips of police beating and whipping harmless and helpless Kenyans flooded the social media and TV channels on Friday.

On Wednesday President Uhuru Kenyatta apologised for police excesses. “I want to apologise to all Kenyans, maybe for some excesses which were conducted or happened,” Uhuru said during a video call with Covid-19 survivors.

There have been three curfew deaths since President Kenyatta declared the dusk-to-dawn curfew after it became apparent that most Kenyans were not observing social distancing as directed.

But in what triggered a traumatising reminder of brute police force quelling anti-state riots during the 2007-08 elections, the officers beat up anyone and everyone who came their way past 7pm -and some before 7pm.

Women, some carrying babies, young men returning home from work, stranded commuters and journalists alike were roughed up, calling into question the success of the vaunted reforms underway in the National Police Service — a service on paper but a force in action.

However, National Police Service spokesman Charles Owino said the cases of police brutality witnessed on Friday were isolated and should not be used to condemn the entire service.

“You don’t miss a few erratic people. Remember our population is over 100,000. But in the police service, we don’t take collective responsibility. Every officer takes individual responsibility for their actions,” he told the Star. He earlier had said the use of batons was justified in Mombasa and blamed unruly Kenyans in large part.

Police boss Hillary Mutyambai is yet to speak about the brutality, only saying he has directed the Directorate of Criminal Investigation to inquire into the killing of Yassin.

The government and international donors have pumped billions of shillings into NPS reforms since the 2007-08 post-election violence.

US Ambassador Kyle McCarter recently told the Star that his country has donated more than over Sh600 million in the years to the police reform project.

The country enacted reform frameworks to change the internal operations and the external image of the police force, who were accused of brutality over many years,

The 2010 Constitution created an independent office of the Inspector General of Police and two deputies to replace the commissioner of police. It also created the Independent Policing Oversight Authority (IPOA).

The IG and the DIGs were expected to have a free hand disciplining errant officers, and reshuffling, among other steps to run the envisaged burnished service.

The office of the Directorate of Police Reforms was created and domiciled in the Office of Inspector General to spearhead transformative changes.

The office is charged with mobilising resources from state and non-state actors.

The Constitution also created the National Police Service Commission, an independent institution to deal with the welfare of police officers and oversee the reforms.

The first commission under the chairmanship of Johnston Kavuludi vetted top officers for suitability and integrity. A number were sent home in the cleanup.

Further, the Constitution created the Independent Policing Oversight Authority, a civilian institution to check the excess of police officers.

The government further embarked on improving the welfare of the officers. Medical cover, house allowances and professionalism training, among others have been introduced. The officers were ordered out of the police line to live among civilians and protect them.

The Kenya Police and the Administration Police have also been merged and placed under the single command of the IG.

Their uniforms have also been changed to a bright non-militaristic and non-threatening blue.

With all these reforms, it was expected that the officers would be more humane, respect human rights, and be considerate when applying force on the unarmed, already economically and socially traumatised populace.

International Center for Peace and Conflict executive director Ndung’u Wainaina said the reforms were developed with the conviction that the continued mistrust that communities harbour against the Police Service portends a breakdown of law and order in the long run.

"Police reforms in Kenya collapsed. Police throughout the country have remained highly politicised. Police are not really protecting the people,  they are still obsessed with protecting the rulers and safeguarding their interests,” Wainaina said.

Security expert George Musamali also observed that the much-touted reforms have failed due to political interference.

Musamali said the introduction of the "draconian" security laws that took away the independence of the IG and the powers of the National Police Service marked the end of the envisioned reforms.

“There are no police reforms to talk about. I think we started very well, then everything collapsed. We went 10 steps ahead and now we are five steps back,” he said.

“There is a lot of political interference in the manner in which the police are operating. We had given the IG independence, tenure of office, including the deputy IGs. And then we went to Parliament with security laws in 2016 and diluted all of them," Musamali said.

However, police spokesman Owino said the service has seen "tremendous transformation" since the reforms were introduced soon after the 2007 elections.

“The police reform agenda has achieved a lot. Policemen are now going about their business in a better way. After 2007-08 elections, there was a need to change a lot in government, including the police,” the spokesperson said.

He said the incidents of police excess were isolated cases, noting that the few errant officers who were captured on camera battering Kenyans should not be a basis for blanket condemnation. He said they will take individual responsibility."

He likened the NPS to a family whose father, a bishop, raises children who sometimes end up being serial smokers, thieves or pastors.

“There is no difference between the police, as an institution, and a family where you find your father is a bishop, you are five children, one drinks, another one smokes, but they are both brought up by the same parent. It does not mean that you will go back to the bishop and ask him how he has brought up the children,” he said.

IPOA commissioner Doreen Muthaura concurs with Owino’s sentiments, saying that 95 per cent of officers deployed to enforce curfew carried out themselves with decorum.

She said cases of brutality were isolated and IPOA has already taken up some of them.

“The officers conducted themselves 95 per cent the way it was supposed to be. Mombasa was a case that was special where a Nation photojournalist was brutalised,” she said.

She disclosed that the authority was already investigating the killing of the 13-year-old boy and the beating of civilians at the Likoni channel in Mombasa.

“Reforms of police are making good progress. IPOA is following other cases. Where are the cases that we have forwarded to the DPP? Let’s not be pessimistic, let’s be an optimist about the reforms in the NPS,” she said.

Demas Kiprono, a human rights lawyer and campaign manager at Amnesty International, said despite the considerable effort in reforming the police, it has remained “a force beholden to the regime [rather than] a professional force, accountable and human rights-compliant service guided by the law and the Constitution.”

Post a comment
WATCH: The latest videos from the Star
by JULIUS OTIENO AND GORDON OSEN
News
04 April 2020 - 05:00
Read The E-Paper