A Nairobi clinical officer contracts the virus while attending to patients

• It is possible hundreds of health workers and their families will contract the coronavirus.

• Global Association of Clinical Officers and Physician Assistants president Ausin Oduor says if many nurses and COs contract coronavirus, Kenyans will suffer. 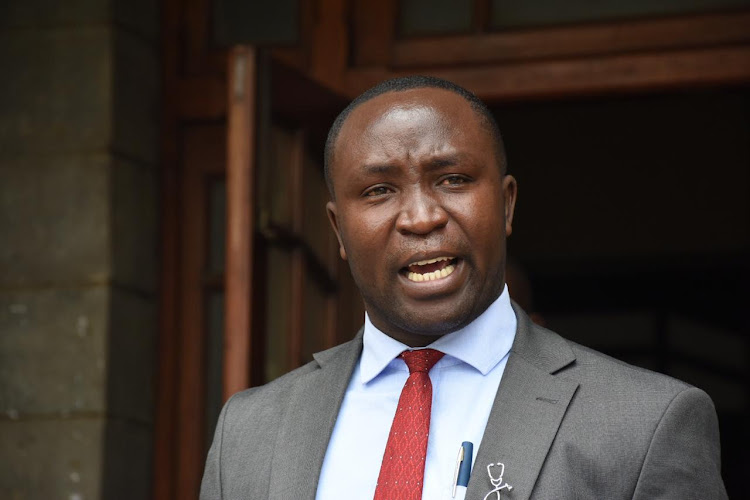 George Gibore, secretary-general of the Kenya Union of Clinical Officers.

A clinical officer in Nairobi has become Kenya's first health worker to contract coronavirus in the line of duty.

She was taken ill last week at Ngara Health Centre in Nairobi, where she works.

Her husband has also been confirmed positive. Both are admitted and isolated at the Kenyatta National Hospital IDU at Mbagathi.

Their children and househelp have been evacuated for isolation and testing.

The senior clinical officer, who has worked for about 25 years, had not been supplied with protective clothing.

Her infection raises fear among thousands of Kenyan clinical officers and nurses, who are the first contacts with patients in health facilities.

Different groups representing health workers now say they are exposed to the virus in their daily work and it is possible hundreds of them and their families will become victims of the virus.

"The [sick] clinical officer has been performing her duties in the outpatient and you can understand the anguish she is going through knowing she may have infected her family," secretary-general of the Kenya Union of Clinical Officers George Gibore said.

Experience from other countries shows that frontline health workers bear the brunt of infections.

For instance, of the 85,195 infected people by Tuesday in Spain, 12,300 were frontline health workers, mainly nurses.

"In high-risk counties, 90 per cent of clinical officers who are frontline workers and who suffer the highest risks have not been trained," Gibore said at a press conference yesterday.

Nurses say more than 50 per cent of them across the country lack protective equipment.

"The counties have tried but there is still a big shortage, especially of the N95 masks. Most nurses at the outpatient departments do not have them," Joseph Ngwasi said. He is the national chairman of the Kenya National Union of Nurses.

He says Covid-19 general awareness has been done well, but the technical training is wanting.

"There is a big gap in training nurses on how to collect and handle specimens for testing, and the entirety of that process," he said.

Majority of the contacts reside in Kilimani, Kibra, Westlands, Makadara, and Starehe.
News
1 year ago

According to the president of the Global Association of Clinical Officers and Physician Assistants, nurses and COs are the most exposed health workers to Covid-19.

"World Health Organisation has acknowledged 90 per cent of the Ebola response in Africa was by clinical officers and nurses, and this is likely to be the case for other infectious diseases," Gacopa president Austin Oduor said.

"For health workers, you need PPEs and training. Doctors have already been trained and protocols on how to deal with patients already exist," he said.

"However, people like cleaners and those who interact with patients and the quarantined persons also need PPEs."

Several health workers at the Aga Khan Hospital in Nairobi are under quarantine after possibly being exposed to the virus last week.

"Kenya will need to deliberately put in place protocols to deal with the exposure of healthcare workers to Covid-19," Dr Majid Twahir, associate dean, clinical services at the hospital, told the Star.

He said Kenya can learn from South Korea, which has not recorded any death of healthcare worker as a result of being exposed to infected patients.

"This is due to the strict precautionary measures they have taken to protect the health workers."

Two weeks ago, Health Cabinet Secretary Mutahi Kagwe said they had procured 5,000 sets of PPE, which health workers say are not enough.

Section 14 of the 2007 Occupation Health and Safety Act gives employees the right to abscond duty when they know that their life is at risk because of the lack of protective equipment.

Doctors in Nyanza told the Star that most counties have not trained their health workers on safety.

“Some counties do not have even one functional ICU bed. The situation is very bad because some counties have just set aside isolation and treatment rooms without the necessary equipment.”

Omache said 66 isolation centres have been designated across the nine Kisii sub-counties in addition to 42 at the KTRH.

She said the KTRH has six ICU beds, adding that a coronavirus treatment room has six ventilators.

In Nyamira, the county is racing against time to have a fully functional ICU ready, according to Health CEC Douglas Bosire. “We are in the process of operationalising the ICU,” Bosire said when he spoke to the Star by phone.

He said the county does not have enough personal protective devices, masks, and gloves. “The national government should expedite the procurement of protective materials. This is a national problem and not just in Nyamira. We don’t want to lose medical staff,” Bosire added.

He further noted that 80 per cent of medical staff in the county have been trained on case identification, emergency response and quarantining.

He said that the county is using Community Health Volunteers, who have been trained, to educate the people on the coronavirus pandemic.

“We have trained more than 1,000 who are going from home to home to educate the people on this pandemic,” he added.

In Homa Bay medics decried lack of training of health workers on handling the Covid-19 patients.

Doctors in the county argued that the county government is not taking training with the seriousness.

Homa Bay’s KMPDU liaison officer Amos Dulo accused the county government of taking a backseat despite the threat the virus poses to people.

Dulo said none of the health officers in the county has been taken through appropriate training.

“Don’t talk about training. The county government has not even provided anybody with protective gears to cushion them from contracting the virus in case of an outbreak,” Dulo said.

Two weeks ago, Health executive Richard Muga said a team of medical officers would undergo training and they will be equipped with the necessary tools to handle the disease.

Muga set aside Malela health centre with 16 beds as the main isolation facility to handle the virus.

“We have also left at least two beds in all eight sub-county hospitals for handling the disease should it occur in our midst,” Muga said.

But on Monday, Dulo said doctors are worried over the laxity by their employer to train and give them gears for protection against the virus.

“What doctors have gone through is a one-hour sensitisation programme which we’re able to get in media. We need thorough training with practical not just paperwork and explanations,” Dulo added.

He said the sensitisation started at Kendu Bay sub-county hospital on Thursday but has not been taken to healthcare workers in other hospitals across the county.

“Some health workers who undergo sensitisation have not even been paid allowances. Homa Bay government should adjust on this,” he said.

Fund to mobilize resources towards containing the spread of Covid-19.
Coronavirus
1 year ago