• He is best remembered for his fearless confrontation with the provincial administration and the police for their role in political clashes of 1992 where 2000 people are reported to have died.

•  His strictly biblical approach to Church, government and everyday life endeared him to Kenyans to the extent that many referred to him as a human rights crusader. 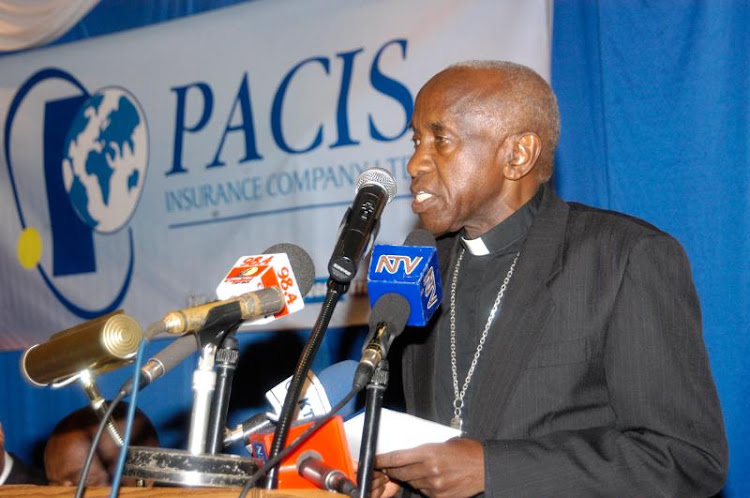 "His Eminence John Cardinal Njue has announced the passing on of Nzeki and prayed for the repose of his soul,” a statement from the Archdiocese of Nairobi read in part.

The former Archbishop of Nairobi — who was unhesitant to speak truth to power — often put the Catholic Church on the spot when he often clashed with the policies of former President Daniel Moi, the Kanu strongman and authoritarian ruler.

He is best remembered for his fearless confrontation with the provincial administration and the police for their role in political clashes of 1992 where 2000 people are reported to have died.

His strictly biblical approach to Church, government and everyday life endeared him to Kenyans to the extent that many referred to him as a human rights crusader.

At one point, when this writer asked him on his role on human rights in the country, he quipped: "Many people out there mistake me for a human rights crusader but in reality, I am only following what the scripture says - not what man says. I am a priest".

He elaborated that human rights [realm] is different from biblical teachings as the former advocates for things such as condoms and gayism, whereas the Bible does not.

"Clearly the Bible teaches that homosexuality is not a human right. It is a sin," Ndingi said in an interview while he was still Archbishop of Nairobi.

Despite his frequent run-in with  Moi, Fr Kalisto Nyagilo, the Archdiocesan secretary of Nairobi said Ndingi still managed to work with the government on development projects.

"The Archbishop tried to upgrade the slums in Nairobi by putting up affordable housing, water and electricity with the help of German funding and government collaboration," he said.

"However, "slum cartels" proved too powerful although we still managed to put up about 100 houses in Mathare 4A," Fr Nyagilo said.

So outspoken was Ndingi in Kenya that many thought, when he spoke, he automatically spoke as head of the Catholic Church in Kenya.

Only much later and after many ruffles with the government, was it clarified that he was not the Catholic spokesman in Kenya.

He also enjoyed cross-denominational respect. He once broke from Catholic tradition when he preached at the All Saints Cathedral following a friend's invite.

The Anglican Church protested against the Roman Catholics and eventually broke away in medieval times.

Former Director Justice and Peace of the Anglican Church of Kenya Mwashigadi Mwang'ombe said, "For the first time in living memory, Ndingi ended animosity and introduced a positive working relationship between the Catholic and the Anglican Church".

Fr Anthony Mwituria talking to the Star shortly after leaving Mater Hospital mortuary remembered Ndingi for crusading for the rights and privileges of Catholic priests.

"Ndingi was instrumental in implementing many welfare projects for priests such as setting up of the pensions scheme, medical insurance and presbytery housing," Mwituria said.

In hushed tones, many in Catholic believe he did not ascend further than the archbishop of Nairobi due to his serving as the Chairperson of Catholic Bishops, Ndingi pressed for unity among churches of all denominations quoting Jesus's teachings urging the church to be one.

On August 30, 1971, he was appointed the Bishop of the Diocese of Nakuru where he remained for 25 years.

He retired on October 6, 2007, and was succeeded by John Cardinal Njue.

Archbishop Ndingi is widely respected for having fearlessly spoken on critical matters affecting the country.

He single-handedly challenged the establishment during the infamous ethnic clashes that rocked Kenya in the 90s.

He repeatedly spoke against abortion and the use of condoms as a solution to the HIV-Aids plague. He played a critical role in the education sector from his time as the national education secretary.

He favoured the establishment of many schools and personally, with the help of friends, especially from the US and Ireland, paid for the education of many young men and women.

In a review of his biography published in 2010 he was described as: “A man of prodigious energy, Ndingi played a crucial yet insufficiently appreciated role in some of the most momentous events of our time, including fighting for social justice".

KENYA: GIVE US BACK OUR CHURCH!