LSK to sue over 'unconstitutional' curfew

LSK to challenge the curfew which is not only unconstitutional but has been abused by the police. 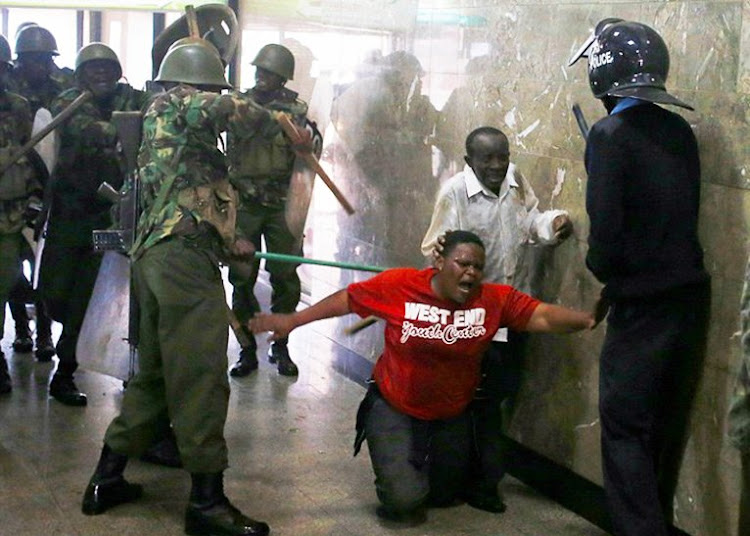 Lawyers are now calling for the resignation of Interior CS Fred Matiang'i over police use of excessive force while implementing the dusk-to-dawn curfew ordered by President Uhuru Kenyatta.

Through LSK, the lawyers said the National Police Service has no right or justification whatsoever substituting the penalty imposed on violating the directive with corporal punishment.

There was mayhem on Friday as police used excessive force to disperse residents as the curfew came into effect.

In Mombasa, photos were seen of residents lying on the floor as others were beaten. Residents were rushing to go on to the ferry before 6pm.

Law Society of Kenya President Nelson Havi on Friday said the penalty for contravening a curfew is a fine of not more than Sh1,000 or imprisonment for not more than three months, or to both and thus the action of police officers on Friday night amounts to aggravated assault.

“We condemn the actions of the individual police officers who have assaulted suspects. The Cabinet Secretary for Interior and Co-ordination of National Government who was declared to have contravened Article 10 of the Constitution should take personal responsibility and resign,” Havi said.

Havi said, in the meantime the society will move to court on Monday to challenge the curfew which is not only unconstitutional but has been abused by the police.

“It is evident that Covid-19 will be spread more by actions of police than of those claimed to have contravened the curfew,” he said.

Police spokesman Charles Owino said the Mombasa situation was regrettable, however, he accused residents of being indisciplined.

Havi said members of the public should document all incidences of aggravated assault by the police and forward the same to the Law Society of Kenya.

“We will take action against the said officers and or their superiors in charge of the commands where the offenses are being committed,” he said.

Excessive force by police on first night of Covid-19 curfew

Police appeared to take the curfew order as a license by government to use excessive force.
News
1 year ago

Havi’s sentiments were echoed by the International Justice Mission which said it will continue to combat police abuse of power against people who are poor as it focuses  to ensure the well-being of families and systematic change in Kenya's justice system to protect people who are poor and vulnerable from violence.

“IJM is in solidarity with the authorities in their hard work to address the global spread of coronavirus disease #COVID19, however, we condemn the violations being meted on innocent Kenyans by the police today. As the nation collectively battles the Coronavirus disease now more than ever the National Police  need to foster and promote good relationships with the broader society. We therefore call for immediate action from Inspector General of Police to address these alarming and extremely unfortunate incidences,”  the firm said.

The firm argued that a police officer shall always attempt to use non-violent means first and force may only be employed when non-violent means are ineffective or without any promise of achieving the intended result.

“IJM has been made aware of reports circulating on social media that are alarming and a derogation from the expected rules and standards for policing. As outlined in the Sixth Schedule, part A, Clause 1 and 2 of the NPS Act, the force used shall be proportional to the objective to be achieved, the seriousness of the offence, and the resistance of the person against whom it is used,” read part of a statement.

The firm said though it continues to encourage social distancing and support community quarantines being implemented by the authority, Police must not use excessive force to bring the curfew to action.

“It is totally unacceptable for Kenya Police to beat and harass innocent Kenyans as they try to enforce the curfew. Every citizen must be treated with dignity as we all try to comply with the order,” the firm said.

According to the firm, police harassment on innocent citizens can only lead to anarchy and thus any police officer found abusing the law and standards of police discipline must be held individually accountable.

Owino warns Kenyans on curfew, says police can use batons, take you to cell in a different county

'We don't want to lie to people. We will arrest you' - Owino
Coronavirus
1 year ago
by PATRICK VIDIJA Investigative Journalist
News
28 March 2020 - 10:10