PHYSICAL DISTANCING A MUST

Kagwe: This is how Covid-19 could overwhelm us

•One model by Adam Kucharski, an associate professor at the London School of Hygiene and Tropical Medicine, shows the string of infections from one Covid-19 case is 244 people in a month. 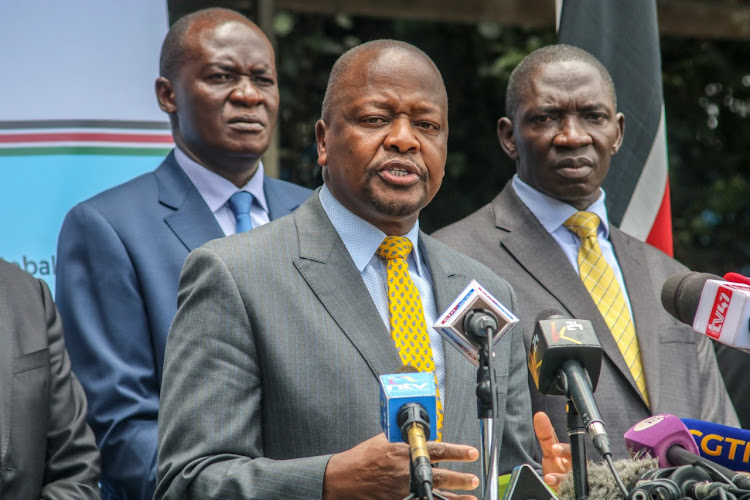 The coronavirus is coming to you.

Some patients, and weary nurses, could die outside hospital corridors.

The only way to prevent this is to strictly practice social distancing.

This seems to be the message Health Cabinet Secretary Mutahi Kagwe was passing on Friday when he announced one person in Malindi has exposed 122 others to the virus while one in Siaya exposed 133 people.

"I plead with Kenyans to understand social distancing, which is being flouted, is the surest way to cut the rate of infections," Kagwe said.

In total, the 31 positive people in Kenya have had contact with 1067 others.

Out of these, only 136 have been discharged after completing the 14-day quarantine period, Kagwe said on Friday afternoon.

According to the World Health Organisation, the surest way to stop coronavirus currently is practising physical distancing and simple hygienic practices like handwashing and not touching your face.

There is no cure or vaccine against the virus. 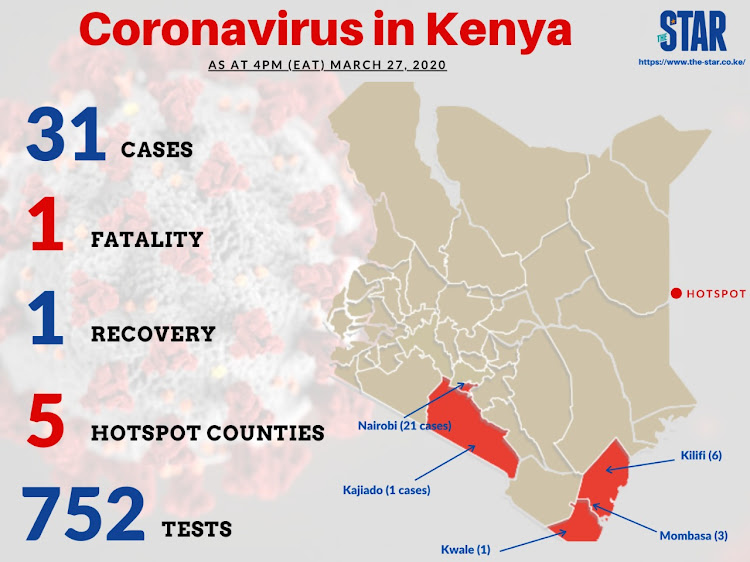 "A lot of our people who have been infected is as a result of social interactions," Kagwe said.

People infected with coronavirus can spread the virus to others even before they exhibit any symptoms themselves.

"The social distance rule that we have over and over been repeating to Kenyans to keep has become a challenge," Kagwe said, implying that Kenya risks dealing with an avalanche of cases that may break the healthcare system.

Kagwe says to prevent this, the government was forced to resort to the dusk-to-dawn curfew to keep as many people at home as possible.

"A lot of carriers are young people who observe social distancing during the day and socialise at night," he said.

One model by Adam Kucharski, an associate professor at the London School of Hygiene and Tropical Medicine, shows the string of infections from one Covid-19 case is 244 people in a month.

Early in outbreak, each COVID-19 case infects ~2.5 others on average. There's ~5 days between one infection and next, so we'd expect one case to lead to 2.5^6 = 244 more cases in a month. If we can halve transmission, so each infects 1.25 others instead, we'd expect 4 more cases.

"Early in outbreak, each Covid-19 case infects (approximately) 2.5 others on average. There's five days between one infection and next, so we'd expect one case to lead to 244 more cases in a month," he says.

"If we can halve transmission, so each infects 1.25 others instead, we'd expect four more cases."

This model has been criticised for assuming extremely high compliance on hand wash and physical distancing, while for many people in Kenya and other countries, life has not changed and they routinely flout these rules.

In such a society, one positive person can indirectly infect more than 500 others in a month.

"If you know if someone in your estate is positive, keep social distance, its the only way to escape the disease. Also keep sanitising," Kagwe said on Friday.

Another model by Reuters shows individual actions can make a big difference. It traces the so-called Patient 31 in South Korea, who had direct contact with 1,160 people.

Between February 6-March 18, the Korea Centers for Disease Control & Prevention linked 5,016 new infections around the Shincheonenji church to her.

"That we didn't have any positive case announced today doesn't mean we relax," Kagwe said on Friday.

According to the WHO, physical distancing means you stay at least six feet away from all other people.

The six feet limit is because respiratory droplets emitted from a person’s nose or mouth by coughing, sneezing, and other activities can travel up to six feet in distance.

It does not mean staying indoors throughout.

It means trying to keep your distance from other people and not the trees, and nature.

According to Kagwe, measures to limit the spread of Covid-19 are most effective right now in the early stage of the outbreak in Kenya, when few people are infected.

This also buys valuable time for the government, allowing it to acquire needed tools like beds and ventilators while avoiding being overwhelmed by patients.

Kagwe noted drastic measures like the curfew and closing schools, canceling public events, and sending people home from work, may seem like an overreaction when Kenya has only a few people infected.

However, early in the outbreak is exactly when such measures are most effective.

THE COST OF DELAYS

"Without an adequate testing mechanism, what we are going to dealing with are cases of full-blown infection, which raises the question of our ability to handle extreme cases," says Dr Adudans, who is also CEO of HewaTele, a social enterprise that works to increase access to oxygen in medical facilities.

Countries like Spain, China and Italy have experienced massive increases in the number of Covid-19 infections and deaths overnight because they waited.

Epidemics do not spread exponentially forever. At some point, people will start to build immunity to the disease and the infected start to recover, so there’s a natural ceiling.

However, according to epidemiologists, it’s important to lower that peak and spread out the cases as much as possible.

Owino warns Kenyans on curfew, says police can use batons, take you to cell in a different county

'We don't want to lie to people. We will arrest you' - Owino
Coronavirus
2 years ago