COVID-19: Kenya to announce new measures as cases rise to 7

Three new cases have been confirmed with the state urging Kenyans to avoid crowded places.

• Health CS said the National Emergency Response Committee on Coronavirus was meeting the President at Statehouse Nairobi and announcements will be made.

• Kagwe’s sentiments came after he announced that three new cases of the virus had been confirmed rising the number to 7. 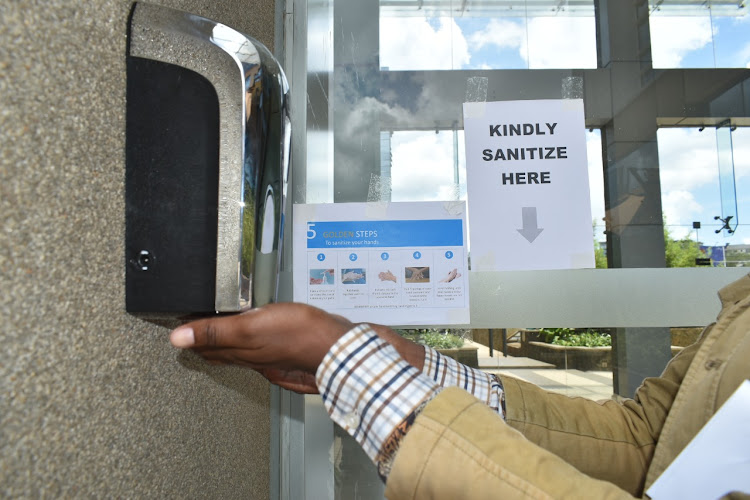 A man makes use of hand-sanitizing point in Westlands, Nairobi on March 18, 2020
Image: ANDREW KASUKU

The government is expected to announce new measures aimed at stopping further spread of the COVID-19 in Kenya.

Health Cabinet Secretary Mutahi Kagwe on Wednesday said the National Emergency Response Committee on Coronavirus was meeting the executive at State House, Nairobi and announcements will be made.

Kagwe revealed this after he announced that three new cases of the virus had been confirmed rising the number to 7.

The CS said all the cases were as a result of importation especially from Kenyans who travelled from overseas countries.

“The threat that we are now facing is from Kenyans who visited overseas countries.  As we contemplate on further measures, we are meeting at Statehouse with the executive and we shall be announcing a few measures we wish to take going forward,” he said.

He was picked by our surveillance team during routine screening at the JKIA.
News
2 years ago

He said going forward any Kenyan arriving in the country must sign a legal form committing to self-quarantine.

Failure to this, we shall trace you and force self-quarantine you and later you will be charged,” the CS said.

The CS said out of the new cases,  two cases involve a couple that travelled from Spain on March 4 through Dubai arriving in Kenya on March 5.

The third case is a Burundian national who had travelled from Dubai arriving on March 17.

"He was picked by Kenya surveillance team during routine screening at the JKIA," Kagwe said.

He said current measures have been stepped up to trace 85 people believed to have been in contact with the new cases.

He said the cases had been confirmed by the National Influenza Centre and the KEMRI labs.

"Currently, we have seven confirmed cases, 18 patients are admitted at Mbagathi isolation wards and samples from 11 suspected cases are under investigations,” Kagwe said.

He said seven other cases had been screened and tested negative. He said the seven are being processed for discharge.

The CS said meanwhile the government will not allow any form of gatherings amid efforts to stop the virus from spreading through social gatherings.

Kagwe said they have 18 cases that are currently admitted at Mbagathi hospital.
News
2 years ago

Banks commit to extend loan payment on personal loans by a year at no cost.
News
2 years ago

Uhuru says COVID-19 is a crisis that might see employees laid off or forced to take half-pay.
News
2 years ago
by PATRICK VIDIJA Investigative Journalist
News
18 March 2020 - 13:49