Businesses slow down, ask employees to work from home amid fears of economic meltdown 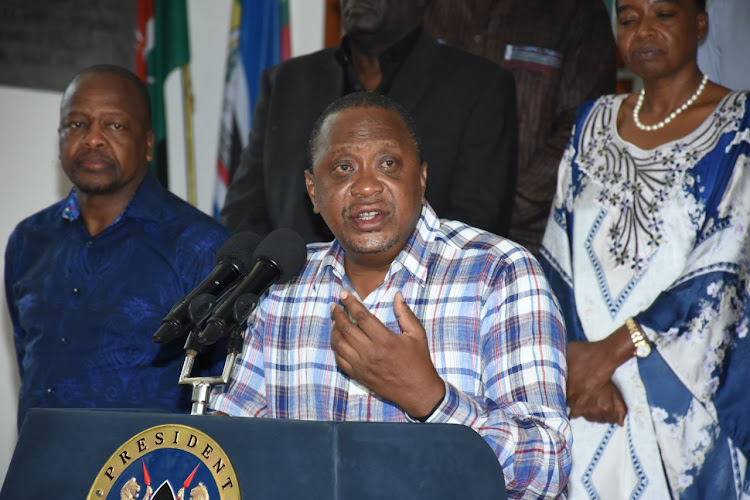 Life is slowly grinding to a halt in Kenya as the government moves  to tame the spread of coronavirus  amid fears that the disease may obliterate the country's struggling economy.

Some private firms and government institutions have asked employees to work from home in an unprecedented move to combat the spread of the virus.

However, the ripple effects of the shutdown will hit many sectors of the economy and pose logistical nightmares for employers.

Kenya has three positive cases of coronavirus but fears of possible fast spread have forced the government to resort to tough measures.

President Uhuru Kenyatta admitted on Sunday that the "pandemic will test us, as it is testing all countries in every corner of the world".

The ripple effect of the shutdown yesterday began to hit the hospitality, transport and tourism sectors.

Public policy and economic analyst Robert Shaw told the Star that the national shutdown would have a huge overall effect on the economy.

“It is a delicate balancing act for the government knowing very well that the fiscal effects of the coronavirus outbreak would be quite enormous,” said Shaw.

Shaw however said the government must do more to contain any possible outbreak of the disease so as to prevent the economy from shrinking further.

Some county governments announced far-reaching limitations to social life with bars, restaurants, theaters, movie houses and beaches ordered shut down to tame the spread of Covid-19.

In Kakamega, Governor Wycliffe Opranya announced public mortuaries will be closed from today and urged residents to bury their relatives as soon as possible.

Following the sweeping adjustments announced by the Chief Justice David Maraga on Sunday, there was a complete shutdown of activities in all courts across the country.

In Nairobi's Milimani courts operations were completely paralysed with no accused persons being brought to court on Monday.

The hearing of the murder case involving Migori Governor Okoth Obado was among the cases affected by the Judiciary shutdown.

The situation was the same in Eldoret and Mombasa law courts where operations remained completely disrupted as most Judiciary employees kept off work.

Inmates who were to appear in the court for their cases were not presented as magistrates and judges rescheduled the cases for mention or hearing in the next two weeks.

Empty classrooms, abandoned hallways and grave silence was the unusual situation in schools that otherwise would be a beehive of activities.

Boarding schools have until tomorrow to close down while universities, colleges and technical training institutions alike will be required to roll up operations by Friday.

The Ministry of Education ordered head teachers and boards of management to ensure that school buses were used to ferry students from school to their home towns for parents to pick them.

The Central Bank of Kenya moved in with sweeping monetary adjustments that would encourage cashless transactions among Kenyans following President Kenyatta's order on Monday.

For the first time, charges for mobile money transactions of up to Sh1,000 were scrapped, while the CBK increasing the daily transaction limit from Sh140,000 to Sh300,000.

The CBK ordered commercial banks to waive charges for transfers between mobile money wallets and bank accounts to cushion Kenyans from the devastating effects of the Covid-19 on the economy.

The government was seeking to make the lives of Kenyans bearable by smoothing availability of large sums of money by a speed dial of mobile phones.

The move, according to experts, is critical to avert panic withdrawal of money from accounts in what could negatively affect the liquidity levels of banks amid threats of an economic meltdown.

MPs are supposed to proceed on a 10-day recess starting Thursday this week.

“There are several options that we have, either scale down the activities or shutdown. We are going to look at the best option,” Lusaka said.

The National Assembly’s House Business Committee will also be meeting this morning to discuss the way forward in the face of the scourge.

However, some members are said to be keen to have the House push on with sittings for the two days and break for recess on Thursday.

Both Houses will have to take a vote if they intend to disrupt their calendar over coronavirus.

In Mombasa, Governor Hassan Joho ordered the closure of all entertainment joints and beaches popular with tourists for 30 days. The implications for the county and national economies will be huge.

Kenya's culture of outdoor partying and dinning would be badly hit by the county government's decision to close joints.

Guests already booked in various luxurious hotels in the coastal city will have to remain in the hotel rooms in what would as the country's tourism sector takes a hit.

But tourism stakeholders urged the government to come up with strategies to cushion the sector over the dwindling numbers of visitors.

“Government should come up with ways to try and cushion the sector. Dubai has already announced precautionary measures, among them reducing tourism levies, in a bid to keep the sector afload,” said Sam Ikwaye, Coast executive director of Kenya Association of Hotelkeepers and Caterers.

“As Kenya's tourism stakeholders, we need to seriously create affordable and attractive travel packages and rates for our domestic and regional tourism markets, amid the coronavirus global outbreak,” said Balala.

With the government urging Kenyans to stay away, some experts have expressed fears that limiting movement among dwellers in islums like Kibra might not work.

“If you tell a person who depends on a daily wage to self-quarantine for 14 or 21 days they are finished. Maybe we should think about bringing in philanthropists who can come together and address the issue of food and hunger,” Joy Kiiru, an economist, told the Star.

Doctors on Friday advised that those who suspect to have the virus should self-isolate at home and call 0800721316, the toll free hotline provided by the Ministry of Health.

Kenyan nurses at Mbagathi Hospital coronavirus isolation ward staged a go-slow to protest against what they said was lack of protective gear and poor training.

The Kenya National Union of Nurses Secretary General Seth Panyako said the nurses would only report back to work once they had training on how to handle patients and received protective gear.

"Nurses are the most exposed workers in hospitals,"Panyako said.

"With no protective equipment gear, how are they supposed to protect themselves at the workplace and their families too when they go back home?"

The hospital is holding 22 people who came into contact with the first confirmed case.

Two of the contacts, who tested positive, have since been moved to Kenyatta National Hospital where the first confirmed patient is being treated.

The epidemic has seen a ban of flights to and from the biggest tourists’ source market of Asia and Europe.
Business
2 years ago

County boss says Bungoma's proximity to the border makes it risky
Counties
2 years ago
Post a comment
WATCH: The latest videos from the Star
by STAR TEAM
News
17 March 2020 - 05:00
Read The E-Paper