The CS suggested that operators should take details of passengers for easier tracing.

• Most operators are yet to put safety measures in place, risking millions of lives.

• Complain they can't find sanitizer, it's too expensive and should be subsidised plus extra for all their work; say ashless pay won't work. 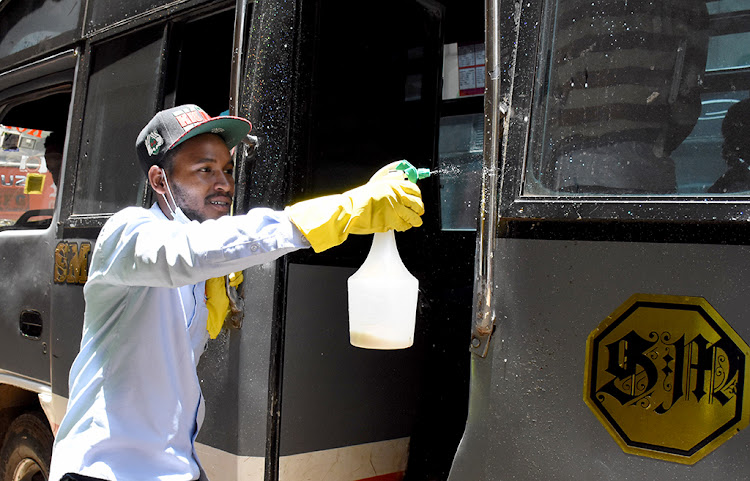 What is this corona you people are talking about? (Hii corona mnatuambia ni nini?"

That's what John Kimani, miraa juice dripping from the corners of his mouth, was asking at 12 noon on Monday in downtown Nairobi.

A five-year veteran of the Kasarani and Mwiki route, Kimani is busy calling out for passengers

His uniform doesn't seem to have been washed for months, and chewing miraa, smoking bhang and drinking are supposedly forbidden.

The industry that ferries millions of passengers daily, many jammed into a small space, is on the frontline of the war against coronavirus.

A spot check by the Star on Monday at the Kencom designated stage revealed that no hygiene and anti-coronavirus measures were in place.

There are many Kimanis in the transport industry.

Four days after Kenya confirmed its first case of coronavirus and a day after orders were given for all PSVs to be clean and provide hand sanitizers, it's business as usual.

Matatus are supposed to be washed twice a day outside and disinfected inside twice a day.

A spot check by the Star on Monday at the Kencom designated stage revealed that no hygiene and anti-coronavirus measures were in place.

It was business as usual, a day like any other, except the country is facing CVID-19.

KBS and City Hoppa matatu touts were outside urging commuters to board.

As commuters boarded the buses, some gingerly, there were no signs of hand sanitizers being offered by the matatu touts.

"I thought we would be offered the disinfectants at the entrance but nothing happened. Thank God, I had my sanitizer in my bag," commuter Elizabeth Mukami said.

She added that the matatu tout did not bother asking for a mobile transaction when paying fare, avoiding the coins that have passed through many dirty hands.

The situation was similar in other designated stages along Ronald Ngala Street, Tom Mboya and Old Mutual/ Koja roundabout.

On Sunday, life began shutting down, literally, as the government moved in to limit the spread of coronavirus.

Kenya's toll as of Sunday night was three, a tiny part of the pandemic that is claiming lives and ravaging economies.

The first case was reported on Friday, a 27-year-old woman who had travelled into the country from the US via London.

Informing the country of the new cases,  President Uhuru Kenyatta said on Sunday two more people tested positive after coming into contact with the first patient.

By yesterday, most PSV operators had not put in place the necessary measures, exposing passengers to the threat of the coronavirus.

For instance, most operators did not have hand sanitizers and operators said the rice has skyrocketed — eating into their profits.

Driver Samuel Njorogel on the Nairobi-Kiserian route said sanitizers were too costly. "It's is a problem. I have gone to two supermarkets in Rongai and Kiserian and they are ou of them."

Nancy Wanjirufrom Kawangware said she did not feel safe using PSVs and now wants to use boda bodas, she thinks they must be safer.

Wanjiru was aware of the virus was, its symptoms and the necessary precautions.\

"I am so worried I might get infected because they do not sanitise us, we do not see them cleaning the vehicle and we still continue handling cash," she said.

I have been telling the matatu associations that if this thing hits us hard, there will be nobody to carry. They must invest themselves to ensure their business model is sustained.

Some passengers carry their own hand sanitizers.

Worried by the turn of events — or, rather the stats quo — Transport CS James Macharia on Monday went on a fact-finding tour.

The CS who arrived at the Railway Matatu Terminus minutes past 11am launched training for touts and drivers on the disease.

Macharia said matatus are at the centre of the campaign because in Nairobi alone they ferry millions of passengers a day.

"I have been telling the matatu associations that if this thing hits us hard, there will be nobody to carry. They must invest themselves to ensure their business model is sustained," he said.

The CS said at least seven million people are within the CBD on a  daily basis, with millions using public transport.

Macharia said the standard gauge railway will not be left out as it carries about  6,000 people between Nairobi and Mombasa every day.

Macharia urged every public service vehicle owner to clean their vehicles after every trip using water and soap or bleach with a duster as one way of preventing the spread of COVID-19.

The CS suggested that the operators should take details of their passengers for easier tracing.

"This is a national crisis, government should subsidise the prices of sanitizers so matatu saccos can afford them. Imagine how much of the disinfectant we would require, noting the number of trips made in a single day.

However, Kimutai said it is not possible as passengers were alighting after short distances.

"It is not possible to take details of the short distances. It is, however, possible to have a manifest for the long-distance trips, as that is one of the requirements by the National Transport and Safety Authority," Kimutai said.

Kimutai said supermarkets and chemists are out of stock of the hundreds of litres of sanitizer needed.

The MOA chairman said prices for disinfectants and sanitizers had gone up and not every matatu could afford them.

"This is a national crisis and the government should subsidise the prices of sanitizers so matatu saccos can afford them. Imagine how much of the disinfectant we would require, noting the number of trips made in a single day," he said.

Kimutai stated though saccos have some funds, they cannot afford the daily purchase of disinfectant and pleaded with the national government to allocate some funds, beyond subsidising the prices.

The Competition Authority has already warned against increasing prices and hoarding.

It said in a statement: "It has come to the attention of the Authority that following a Government pronouncement of a confirmed Coronavirus case, some manufacturers and retailers are contemplating collusive increases of prices and/or hoarding with the intention of subsequently increasing prices of various consumer goods."

It went on to say it violaters — manufacturers and retailers — are each liable to pay as much as 10 per cent of their respective turnovers.

Kimutai said manufacturers and suppliers should up their game and evenly distribute sanitizers without hiking prices.

The MOA boss asked why the Railways Terminus has no running water yet it is one of the largest bus terminals in Nairobi.

The terminus allows in about eight routes that could comprise of five or more saccos each.

Once a matatu enters the terminus, it drives slowly all the way to the exit allowing passengers to board.

Macharia said they will not rest until there is total compliance.

"Taxis as well. We are having three sessions a day at JKIA to make sure they are taken through all those measures. This is a matter that requires everybody to buy-in, it affects all," the CS said.

In a thinly veiled attack on the operators, Macharia said everyone should ensure self-compliance.

What happens when we have Airtel or Telkom users onboard and as the tout, I only have Safaricom or M-Pesa? This will result in confusion and delay in the trip.

"In times like this, you cannot just look at government and say it can provide sanitizers," he said.

Kimutai insisted that operators must adopt mobile payments to avoid physical contacts with money that has passed through many hands.

"We had advised our sacco members to start offering mobile transactions for payment of transport. It is safer looking at the options we have," Kimutai said.

However, concerns had been raised by the touts since not all commuters are Safaricom users.

"What happens when we have Airtel or Telkom users onboard and as the tout, I only have Safaricom or M-Pesa? This will result in confusion and delay in the trip,"tout Geoffrey Katiku said.

Back in 2018, Kimutai had called for return of the cashless payments system to rein in corruption among the matatu operators.

He had raised concerns that the availability of liquid cash has turned the sector into a cash cow for traffic police officers who extort matatu crews.

The Transport Ministry had then issued a deadline for all matatus to adopt the cashless system, as per Operation of Public Service Vehicles (PSVs) Regulations, 2013.

The deadline had been set as July 2015 but was pushed to December same year.

The system was aimed at streamlining the PSV industry and enabling the Kenya Revenue Authority to collect taxes.

A number of firms got on board — Safaricom (Lipa na M-Pesa), Fibre Space Limited (MY 1963), Google in partnership with Equity Bank (Beba Pay) and a Hong Kong firm (TaptoPay).

The move was praised for enabling investors to control their cash flow and ensuring a fair pricing system to stop price hiking during peak hours.

Receipts were to be generated to show passengers' balances, vehicle registration numbers and the names of conductors.

Card registration was free, the only requirements for account creation being the national identity card, a valid phone number and the date of birth.

Users could also load money on the card through M-Pesa or other avenues, depending on their preferred card system.

However, the cashless system was never implemented.