Maraga ordered magistrate courts to review bail terms for those in remand.

•New arrests of less serious cases will be dealt with at police stations. 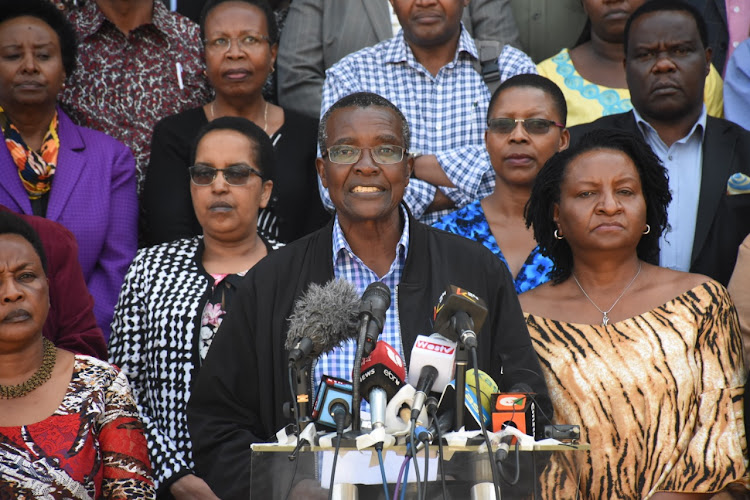 Chief Justice David Maraga giving a brief on the implications of the announcement of the first COVID-19 case in the country at Supreme Court on March 15,2020.
Image: MERCY MUMO

The Judiciary, Prisons Department, the police and the office of the Director of Public Prosecutor have announced drastic measures to slow the spread of the coronavirus.

Following a joint meeting, it was resolved that courts will not hear or mention existing criminal and civil cases and appeals for the next two weeks. New arrests will also be dealt with in police stations except for serious crimes from today.

Chief Justice David Maraga yesterday announced the suspension of the criminal and civil cases in the wake of the confirmed first case of COVID-19 in the country on Friday.

Speaking after deliberations with the National Council for the Administration of Justice (NCAJ) at the Supreme Court, Maraga said there is a critical need to protect members of the public and their staff from infection and to prevent the spread of the disease.

“The judiciary will forthwith scale down court activities throughout the country over the next two weeks effective tomorrow, March 16, 2020, in order to allow further consultations and design appropriate measures to prevent the spread of coronavirus,” said Maraga.

All execution proceedings are also suspended during the period.

During the two weeks, Maraga said, prisoners and remandees will not be presented to the court. He ordered magistrate courts to review bail terms for those in remand.

Maraga also directed Judges in all stations to review deserving cases already identified by prison authorities in the meantime and issue appropriate revision orders in an effort to decongest the prisons.

Courts will continue to handle certificates of urgency and taking a plea for serious cases while the police will handle less serious cases according to guidelines that will be issued by the Inspector General of Police.

“During this time, all judicial officers and staff will continue being on duty. However, there will be no open court appearances,” he said.

“There will be no foreign travel for the next 30 days for the staff of the justice sector institutions, whether official or private, save for exceptional circumstances,” said Maraga.

Maraga said an inter-agency committee has been established to liaise with the national committee on COVID-19 and advise the NCAJ on further precautionary measures on an ongoing basis.

“We shall review these directions from time to time as the need arises,” he said.

NCAJ members include the DPP, DCI, IG, Commissioner of Prisons, EACC, judges among other state and non-state representatives.

The judiciary handles about 800 cases in a day while the cases have been reducing in the last year as the judiciary complained about budget cuts that weakened their work muscle.

On Friday, Health CS Mutahi Kagwe confirmed the first case of COVID-19 in Ongata-Rongai Nairobi, after a 27-year-old female student tested positive for the virus.

She had arrived in the country on March 5 from the US via London.

She had just returned to the country from the US through the UK. On Saturday, the government announced that it had quarantined 22 others who were in close contact with her.