• Oparanya who double up as Kakamega governor expressed concern with the available resources saying it might be a challenge to control the locusts.

• Agriculture CS Peter Munya described the locust invasion as the worst hit in Kenya in 70 years. 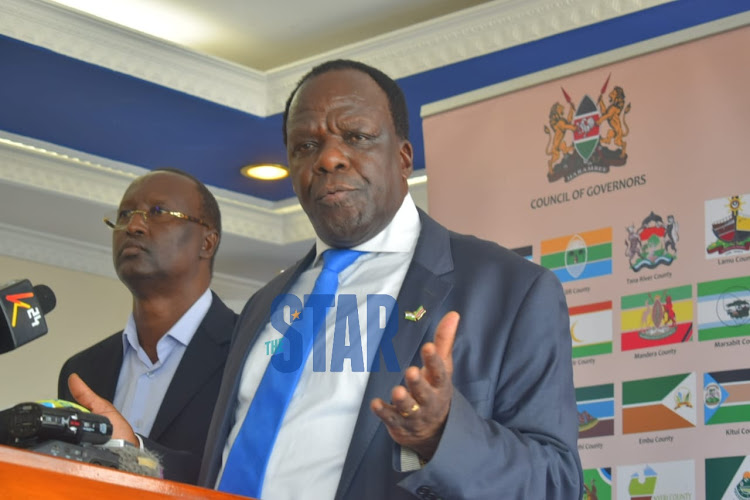 Twenty-seven counties have so far been affected by locusts since the first invasion in the country on December 28, Council of Governors chairperson Wycliffe Oparanya has said.

The Kakamega Governor expressed concern with the available resources saying it might be a challenge to control the locusts.

"The control measures have not been adequate and so far the pandemic is growing very fast. Hence, there is need for a concerted effort by both levels of government and other stakeholders plus adequate funding from the National Treasury to finance the response activities," Oparanya said.

He said the invasion was underestimated hence the growing pandemic.

Oparanya was speaking during a press conference on Wednesday at Delta Corner, Nairobi where together with the Governors' Health Committee Chairperson Mohammed Kuti addressed matters on Health and Agriculture currently facing the country.

Meanwhile, Agriculture CS Peter Munya, in a separate presser described the locust invasion as the worst hit in Kenya in 70 years.

He was speaking at a locust sensitisation meeting at Safari park hotel in Nairobi.

Munya said the infestation is a threat to food security and community livelihood since a swarm of half a million locusts can consume one metric tonne of food in a day, which is enough to feed 2500 people.

He said the team has successfully identified breeding sites in eight affected counties.

Munya said due to remoteness and problem insecurity in some counties, there could be cases of underreporting.

He urged counties to continue monitoring the invasion especially in expansive areas like Garissa and Turkana.

He said a total of 26,900 litres of insecticides has so far been used in spraying.

Virtually all the eggs have hatched and the pests are at nymph stage.
Counties
2 years ago

Frans Makken says it is difficult for a country to be fully prepared to fight the menace.
News
2 years ago

Locusts are wreaking havoc in Northeastern, Mount Kenya, Eastern, among other regions
Counties
2 years ago
by MAGDALENE SAYA AND SHARON MAOMBO
News
11 March 2020 - 15:39