Macharia Kamau says corona is not the worst global epidemic, neither has it proven to be the most deadly

• PS says declared that Southern China Airline should continue to be allowed to freely fly into and out of the country.

• Macharia turned his guns on the media accusing it of an “insatiable perennial appetite to demonize all things government”. 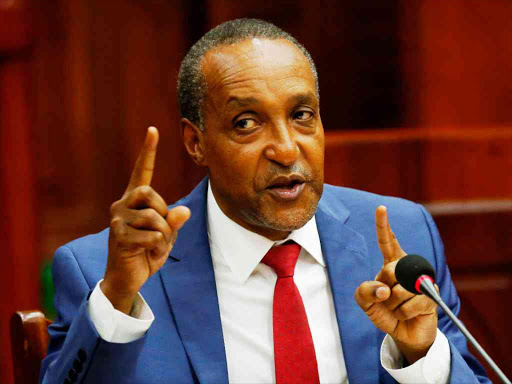 Foreign Affairs Principal Secretary Macharia Kamau has termed as “short-sighted, careless and xenophobic” Kenyans who have raised the red flag about the government’s handling of the deadly coronavirus.

In a strongly worded communique confidentially shared with Ministry’s top officials, Macharia hit out at critics saying coronavirus is “not the first global epidemic and is not the most deadly.”

The message seen by the Star was shared by the PS on a WhatsApp group of senior officials, including Kenya’s diplomats abroad.

The official spoke as hopes of containing the virus in China vanished as the first case in Sub-Saharan Africa was officially announced in Nigeria.

Despite outrage from Kenyans, the PS who served as Kenya’s Ambassador to the United Nations declared that Southern China Airline should continue to be allowed to freely fly into and out of the country.

This is the airline that landed with 239 passengers in Nairobi from Guangzhou –– the second most affected region in China –– triggering an immediate uproar from Kenyans.

“People are allowing fear and xenophobia to drive their response to the situation. And our newspapers and some segments of our political class are playing into it,”Macharia protested.

“This is not the first epidemic that we've faced. And it's surely not the worst. Nor has it proven to be the most deadly.”

On January 31, Kenya banned the National carrier Kenya Airways from flying to China, the epicentre of the deadly disease.

But Macharia now says: “The Southern China Airline has nothing to do with the crisis per se. We need to keep that airline flying, it is our only connection to our people who are in China. Over 3,000 students and thousands of other citizens. How else do we expect our people to come home eventually?”

Coronavirus has killed more than 2,800 people and infected about 83,000 worldwide.

The low number of infections across Africa, a continent with close economic ties with China, has puzzled health specialists and raised questions about authorities' capabilities to detect the virus.

According to Macharia, Kenya cannot severe contact with China as Kenya’s economy would collapse or take a severe blow.

Ironically, its countries where the virus has been detected that has experienced an immediate economic downturn.

In Nigeria, the stock markets took a pounding soon after the first case was confirmed.

But Macharia said government policy cannot be run on an isolationist, xenophobic policy based on fear, ignorance and prejudice.

“We need to understand the nature of the crisis we are facing. And Kenya cannot be isolated from the rest of the world in any shape or form. Our economy is not natural resource-based it is service and connectivity based. Our economy would collapse or take a severe blow if we act in haste,” he stated.

He said many countries are still flying in and out of China and doing business with the Asian giant.

All that is needed, he argued, is “attenuated measures around travel” as Kenya has done.

The High Court on Friday temporarily suspended flights from China.

Justice James Makau issued the ruling following a case filed by the Law Society of Kenya saying the matter is of great public interest.

The Head of Public Service Joseph Kinyua on Friday said the Kenya Defence Forces will now take charge of all entry points to the country.

Kinyua said the KDF medical personnel will be deployed in all airports, maritime ports, and all border points in order to enhance containment of the Coronavirus outbreak.

MPs warned that the Jubilee government would be entirely to blame if the scourge hits Kenya.

In his message,  a livid and unapologetic Macharia turned his guns on the media accusing Kenyan editors of what he termed an “insatiable perennial appetite to demonize all things government”.

“What we are seeing is xenophobia mixed in with an unsatiable perennial appetite to demonize all things GOK - masquerading as high minded self-preservation, love for the wananchi and defenders of the people,” he bitterly lamented.

“These headlines play up and into the fear and ignorance of some segments of our population. They are sadly short-sighted and careless distortion of the reality around us.”

Should a case be identified, Macharia claimed, preparations are in place to respond despite what he said newspapers reported.

However, this claim appeared to be a contradiction of what the Ministry of Health announced on Thursday.

The Ministry admitted that Kenya has only 11 isolation beds ready to be used in case of a coronavirus outbreak.

Last week, Treasury Principal Secretary Julius Muia said the Ministry of Health had asked for Sh1.8 billion to renovate the Mbagathi ward. The money has not been approved yet.

But Macharia maintained it’s not by accident there are no coronavirus cases in Kenya.

He said the Ministry of Health has been vigilant and he has been part of that process.

“I know what measures have been taken at all border points in this country. They meet international standards and are WHO compliant,” he told the diplomats.

Macharia urged caution against discrimination and compared the coronavirus crisis to HIV/AIDS when it first hit Africa.

“Let us also remember that our own epidemic here of HIV and AIDS, transmitted by people to people contact as we ( albeit intimate)  had turned Africa into a hated continent. We use not to be able to travel to conferences and meetings because we could not get visas. People stopped coming here. Let us not forget that Aids pandemic has killed 25 million people. Of which hundreds of thousands were Kenyans,” he said

“While this coronavirus has only killed 3000 so far. Sadly many will die from the disease but It is unlikely that it will kill 25,000 let alone hundreds of thousands or millions.”

Judge said all the passengers will be quarantined until certified free from virus.
News
2 years ago

Justice Makau issued the ruling following a case filed by the LSK.
News
2 years ago

Team to coordinate preparedness, prevention and response to corona threat.
News
2 years ago
Post a comment
WATCH: The latest videos from the Star
by FELIX OLICK Political Editor
News
28 February 2020 - 15:31
Read The E-Paper