• According to the United Nations Entity for Gender Equality and the Empowerment of Women, in nearly two-thirds of the countries worldwide, women are more likely than men to face food insecurity. 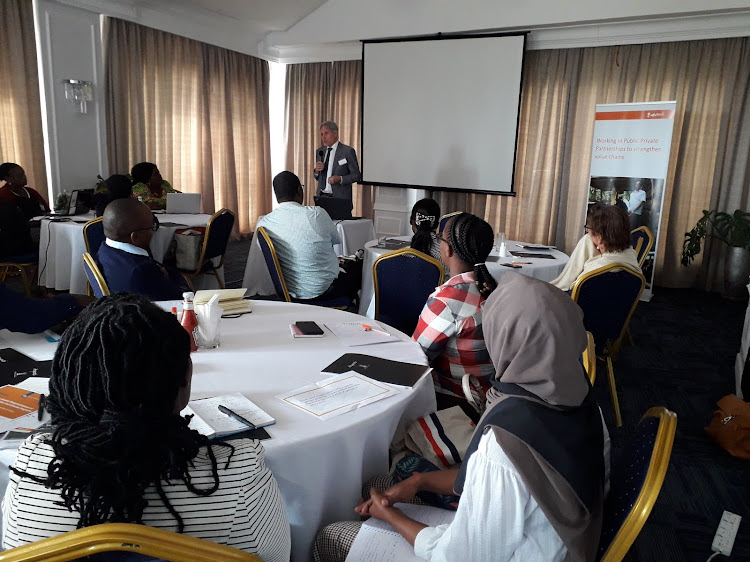 Ambassador Frans Makken making his some closing remarks on gender on the agenda.

The Netherlands ambassador to Kenya, Frans Makken has pointed out that it is very difficult for a country to be fully prepared for a locust invasion like the one currently being experienced in Kenya.

Makken noted that for an incident that happens once in decades, it may not be fair to expect a country to always invest in the machinery, pesticides, and maintenance of equipment used to handle a locust invasion especially when the financial implications are quite substantial.

He noted that long droughts which are followed by long rains in normally dry areas are an excellent breeding ground for locusts.

Makken said this during a round table meeting organized by the Embassy of the Kingdom of the Netherlands to discuss opportunities for the advancement of women's participation in food security, water supply, and management and climate initiatives in Kenya.

The event featured government representatives, partner organizations working with the Embassy of the Netherlands, and various experts.

It had the participants discuss their experiences, obstacles, and successes regarding gender mainstreaming while implementing various projects in the country.

The deliberations which also focused on enhancing food security in the country encouraged sharing useful tools, planning, budgeting, and enhancing synergies between projects as ways of tackling gender inequalities.

According to the United Nations Entity for Gender Equality and the Empowerment of Women, in nearly two-thirds of the countries worldwide, women are more likely than men to face food insecurity.

The differences in gender roles, norms, and relations also lead to women being more vulnerable to the effects of climate change.

A 2016 research paper by IMF dubbed “Inequality, Gender Gaps, and Economic Growth: Comparative Evidence for Sub-Saharan Africa” indicates that gender inequality in the sub-Saharan Africa region remains one of the highest and is declining slower than in other regions globally.

However, gender inequalities in food security continue to be a global problem that requires a multi-pronged approach to resolve.

Makken reiterated that the Netherlands will continue partner with Kenya to find innovative solutions to global challenges such as food insecurity.

He explained that the programs and initiatives the Embassy funds present opportunities to strengthen the role of women as agents of change in ending hunger and malnutrition, building climate resilience, and contributing to sustainable water resource management, in line with Kenya Vision 2030, as well as the SDGs.

Post a comment
WATCH: The latest videos from the Star
by STAR REPORTER The Star
News
21 February 2020 - 07:53
Read The E-Paper