The president's children: the Moi siblings

The former head of state, a divorcee had eight children.

• Former President Moi had twins and an adopted daughter

• Gideon Moi is the favourite and the late president's heir apparent 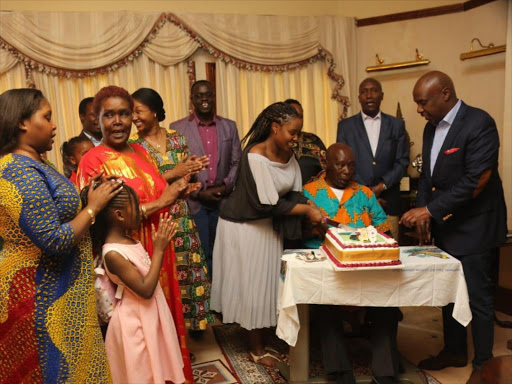 President Daniel arap Moi had eight children, among them a set of twins.

One of his children grew up to be a military officer, another thrilled Kenyans with his rallying skills, while yet another dominated headlines over a dramatic divorce and maintenance case.

The family has also produced politicians but not as charismatic and larger than life as their father.

Together they were blessed with eight children - five sons and three daughters.

Lena, a trained teacher, later took up the role of a full-time housewife to raise the children as Moi's political career took root.

The most well-known Moi family member is his last born, Baringo Senator Gideon Moi, born in 1964.

Gideon is Moi's favourite and heir apparent and has taken up the role of the family spokesperson.

Moi's firstborn is Jenniffer Chemutai Kositany born in 1953. An alumna of Kenya High School who later pursued university education in the United States, she maintains a private life.

Jennifer is widowed. Her husband Stephen Kositany, who hailed from the politically-famous Kositany family in Nandi county, died in a road accident.

Rally driver and enthusiast, Jonathan Toroitich is Moi's second child and firstborn son. Jonathan, who was much closer to his mother passed on in April 2019 after a long battle with cancer.

John Mark, the thirdborn, is the least known of Moi's sons. Born in 1958 he lived briefly in the United States but came back home without completing his studies.

Current Rongai MP, Raymond Moi born in 1960 is the family's thirdborn after which Moi had twins Philip and Doris born in 1962.

Philip is a retired army major and among the pioneer indigenous Kenyans to take up polo as a sport.

He has had a rough time in the corridors of justice with his divorce and a Sh90 million maintenance case against his estranged wife Rosana Pluda.

Doris, on the other hand, has kept away from the limelight. She sits on the board of some of the schools associated with the former president.

She is an alumna of Nairobi Primary, Limuru Girls and the British-curriculum Imani School in Thika and had a brief stay in Australia.

A widow, Doris was married to Jonathan's rally navigator and son of veteran Nandi politician Simon Choge. Ibrahim died in a road crash.

June, the youngest, is Moi's adopted daughter. Like Gideon, she was also the former president's favourite.

She attended Nairobi Primary, Kenya High School and then moved on to university in Canada. She is a successful businesswoman.

The president and Lena separated in 1974 and finally quietly divorced in 1979.  The former president never remarried.

The wife retreated to a quiet life at her Rongai farm where she passed on in July 2004.

Despite leaving separately for 30 years, she was buried at Moi's expansive farm in Kabarak. She was the first lady Kenya never had.

Moi’s father, Kimoi arap Chebii, died in 1928 when the former president was only four and little is known about his mother, Kabon.

Moi's 4-month fight for his life in hospital

His condition worsened since Sunday, on Monday he fell into a coma.
News
1 year ago

List of property, investments owned or co-owned by the family and its partners is endless.
News
1 year ago
by FRANCIS OPENDA Business Editor
News
05 February 2020 - 08:03