Uhuru eulogized Moi as a passionate Pan-Africanist who wanted a better continent.

• President Uhuru Kenyatta termed Moi as a leading figure during the struggle for independence.

• Raila said Moi strived to hold the country together as he struggled to unite the people. 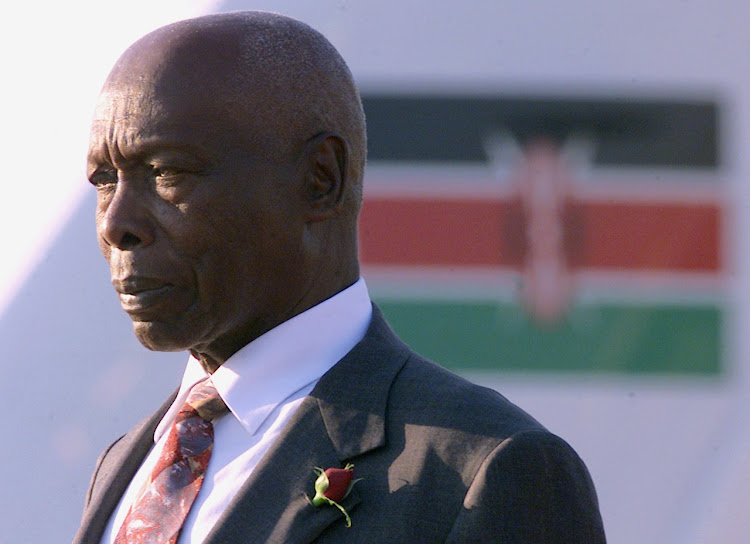 Following the death of the second President Daniel Moi on Tuesday morning, leaders and Kenyans have sent their message of condolences to the family.

President Uhuru Kenyatta termed Moi as leading figure during the struggle for independence.

Uhuru said Moi was passionate Pan-Africanist who not only built his nation but wanted a better continent.

"The late Mzee Moi's steady hand guided Kenya through the restoration of multi-partyism and many other challenging periods; culminating in the peaceful transfer of power in December 2002," Uhuru said.

The President said Moi continued to serve Kenya and Africa by mentoring leaders in Kenya and beyond, through continued participation in development projects and charitable works, and advocating for Peace, Love and Unity throughout Africa and the World.

Deputy President William Ruto said he was deeply saddened by the passing of Mzee Moi.

"Because of his love for the people of Kenya and his unflagging patriotism he sacrificed his personal comfort and happiness to secure stability and unity at all times," Ruto Said.

"It is sad to say goodbye to a man whose legacy we all feel, and we thank Almighty God for the gift of Mzee Moi's leadership. In this sad moment of great loss, therefore, let us still rejoice because of what he did for his countrymen and countrywomen."

Former President, Daniel Moi’s contribution to stability and peace in Kenya is undeniable. I have received his death with a heavy heart, and I share the burden of this grief with his family and relatives. May his soul rest in peace. pic.twitter.com/su7eU7l4b3

Raila said Moi strived to hold the country together as he struggled to unite the people.

He added that Moi allowed the country to return to multiparty politics, and was constant in easing pressure in the country through incremental reforms.

"To his credit, President Moi gave in to the clamour for change and allowed the country to return to multiparty politics. He was constantly able to ease pressure in the country through incremental reforms," Raila's statement read.

Wiper leader Kalonzo Musyoka said he learned with a deep sense of loss of the passing on of Moi.

"He was a devout Christian, father figure, an African icon, and an astute politician. My deepest condolences to my brother Gideon, the entire Moi family and the nation of Kenya," he said.

"I have received his death with a heavy heart, and I share the burden of this grief with his family and relatives. May his soul rest in peace," he said.

Muturi passed condolence message on behalf of the National Assembly to Moi's family.

"President Moi's untimely demise leaves a huge gap among our African elderly statesmen whom ourselves as younger leaders looked up to from time to time for wise counsel on leadership," He said.

President Moi was an astute politician. Always brimming with insight and revealing anecdote, he employed pragmatic nationalism to keep the country together for the 24 years that he led our nation.

Muturi added that "In President Daniel Arap Moi, we mourn the passing on of a distinguished son of Kenya and a great African icon whose passion for the renaissance of the East African Community is unmatched".

His Senate counterpart Ken Lusaka described Moi as a man with sharp wits, extraordinary political savvy, uncommon generosity, firm resolve, and an infectious manner of conjuring in the Kenyan people and a very patriotic spirit.

"Having served under Mzee in the then Provincial Administration as a District Officer and District Commissioner, I admired him for his punctuality, penchant for statistics and promotion of talent through music," Lusaka said.

The Majority leader in the senate Kipchumba Murkomen said he will remember the late Mzee Moi for his effort to unite the nation and for his love and investment in matters education.

Uhuru eulogized Moi as a passionate Pan-Africanist who wanted a better continent.
News
2 years ago