Ruto said during his campaign in 1997, he met Moi who used to give them handouts.

• Mzee Moi died at the age of 95 after a lengthy stay at Nairobi Hospital.

• In his address to the nation, Ruto said Moi in his regime secured stability and unity at all times for the country. 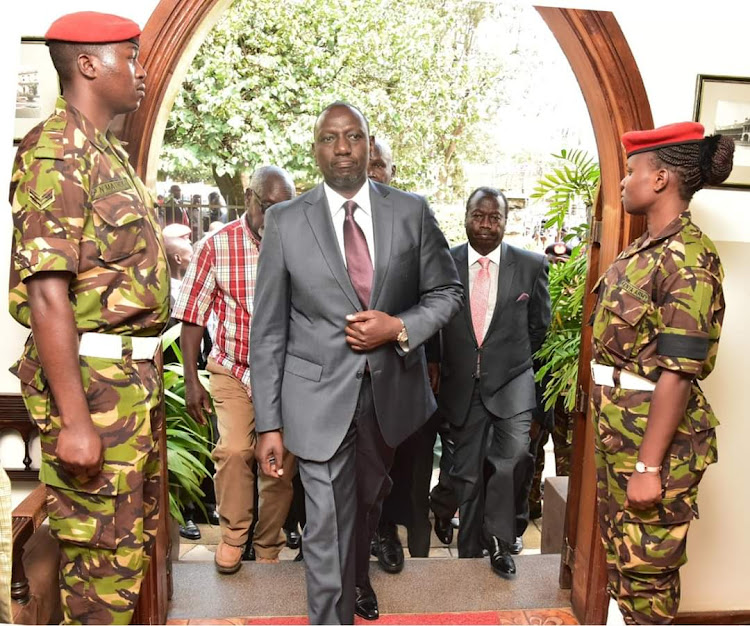 Retired President Daniel Moi was a 'vicious and an interesting fellow'.

These were the words of William Ruto on November 11, 2008, during an entertainment show in one of the local channels.

This was a stark contrast to the words he spoke outside the Harambee House annexe on Tuesday the day the former President passed away.

Mzee Moi died at the age of 95 after a lengthy stay at Nairobi Hospital.

In his address to the nation, Ruto said Moi in his regime secured stability and unity at all times for the country.

“As a teacher evangelist who tossed himself into politics, Mzee Moi excelled. His genuine concerns, loyalty and sincerity allowed him to attain power and attract massive support,” Ruto said.

“Just as Moi did, we must as a country strive to excel. He taught and mentored many, his determination showed that nothing is impossible and that Kenya can be a better place."

In 2008, Ruto who was Eldoret North MP said during his campaign in 1997, he met Moi who 'used to give them handouts'.

He narrated how Moi tried to block his Parliamentary debut in the 1997 general elections.

"Nyayo is an interesting fellow... the first time we met him, we used to be officials at a district organisation at the university.. he used to give us handouts here and there .. " Ruto said.

"When I ran for MP position in 1997, he came to Eldoret and he was vicious.. He stood there and said that Eldoret North constituents need to elect people whose character and background was known."

Ruto said Moi gave examples of his competitors during that period.

"Choose between [Reuben] Chesire and [William arap] Saina. I understand that there is some character running around here and there. I was 30 years then but I won," he added.

In 1992, Ruto was Organising Secretary of Youth For KANU 92, a group that was formed to drum up support for  Moi in the 1992 election.

"When I won, we became friends," Ruto added.

EXPLAINER: What happens during a State Funeral?

Moi will receive Military's three-volley salute ranging from 13 to 21 rounds of ammunition.
News
1 year ago

"We have accepted this."
News
1 year ago

Moi’s life is one of the most improbable political success stories of our time.
News
1 year ago

Why Ruto and Moi cannot work together