How corruption almost ran down Kenya under Moi's watch

• Behind those goodies to schoolchildren, Moi, who described himself as the best in every profession, from farming to economics, was leading the country to its economic deathbed, courtesy of wanton corruption that characterised his 24-year rule. 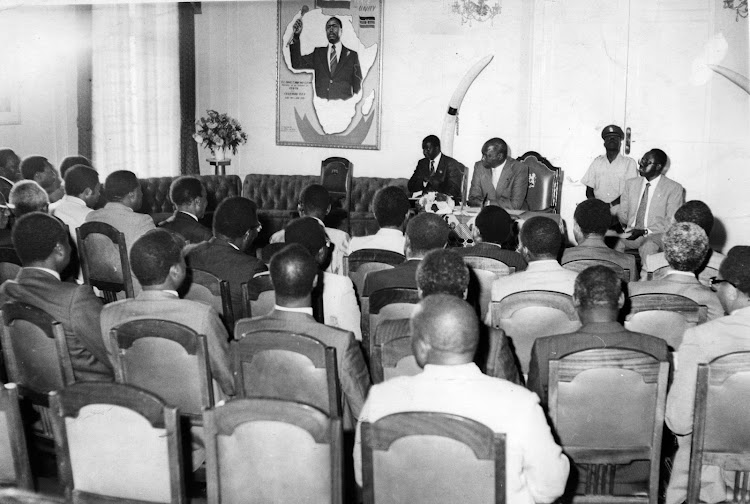 On October 10, 2019, Kenyans observed Moi Day for the first time since the promulgation of the country's new Constitution in 2010.

This is after the High Court restated it to the list of National Holidays in 2017 after Justice George Odunga ruled that failure to commemorate the day was an illegality and a breach of the Public Holiday Act.

On that day, Kenyans who went to primary school during his tenure, remembered with nostalgia singing to 'Kanu yajenga nchi' tunes whenever the retired head of state visited their local towns.

However, as evidenced by a Twitter post under the hashtag #HappyMoiDay, the highlight of the day was the free school milk programme that is said to have raised primary school enrolment by 23 per cent in 1995 from three per cent in 1978.

Behind those goodies to schoolchildren, Moi, who described himself as the best in every profession, from farming to economics, was leading the country to its economic deathbed, courtesy of wanton corruption that characterised his 24-year rule.

As a percentage of GDP, domestic investments fell gradually in 1990 to 13 per cent in 2001, and domestic savings rates tumbled correspondingly from over 20 per cent to a measly four per cent during the same period.

The economic rundown was so bad that Kenya was named one of the world's five most corrupt countries by the anti-graft watchdog, Transparency International, in 1998.

Officers in Moi's government had, however, perfected the art of putting lids on corrupt arrangements worth millions of shillings, save for few like the construction of Turkwel Hydroelectric Power Station in between 1986 and 1991.

Funds meant for the dam got 'lost' twice before it was eventually built at three times the estimated cost, twice the allocated amount and producing energy significantly below capacity.

It was, however, not until the end of Moi's era in 2002 that the world got to hear of the biggest corruption scandal to date that took away 10 per cent of Kenya's GDP in the 1990s.

In the ‘Goldenberg scandal’, Kenya lost $600 million in compensation paid to Goldenberg International for non-existent gold and diamond exports.

It is alleged that the Kenyan government subsidised exports of gold, paying exporters in Kenyan shillings 35 per cent over their foreign currency earnings. In this case, the gold was smuggled from Congo.

Although the former President was not directly linked in the scandal, a former Finance ministry permanent secretary Wilfred Koinange told an inquest set by Moi's successor Mwai Kibaki in 2003 how the former ordered a transfer of $76m to Goldenberg in 1992.

Moi was also named by the chief architect of the scandal Kamlesh Pattni as having been a shareholder of GIL by nominee.

The scandal saw the International Monetary Fund (IMF) cut the $500 million precautionary facility to the country, exposing it to high risk in case of volatility in the global economy.

IMF reinstated the fund to Kenya in the mid 2000s, long after Moi had exited Kenya's political space.

Kenya's foreign aid money was also frozen in 1998 because party hacks in Moi's Kenya African National Union (Kanu) were siphoning off funds meant for the poor — more than half of the population lives in poverty.

In 2002, Kroll & Associates (UK), a private investigation and security firm, estimated Moi and his closest associates to have stashed abroad close to Sh300 billion of state funds.

Economist James Muge, who worked as a special adviser in East Africa during Moi's tenure, however hails the former head of state for fronting the interests of the people at the economic pyramid, softening the cost of living.

''Although his dictatorial tendencies of determining retail prices was unpopular among the business community, he made sure the cost of living was affordable for many households,'' Muge said.

He says Moi's dictatorial policies on agriculture encouraged food production by every household and had elaborate support mechanisms to ensure that such polices are implemented.

''Mzee ensured that every household engaged in crop, poultry and livestock farming. Those days, agricultural extension officers performed their duties, and provincial administration was awake to ensure policies were implemented,'' Muge said.

Post a comment
WATCH: The latest videos from the Star
by VICTOR AMADALA Business Writer
News
04 February 2020 - 16:17
Read The E-Paper