Kiunjuri did not deliver - Uhuru hits back

• Uhuru said his administration is seeking public servants who will take their responsibilities seriously with more actions than words. 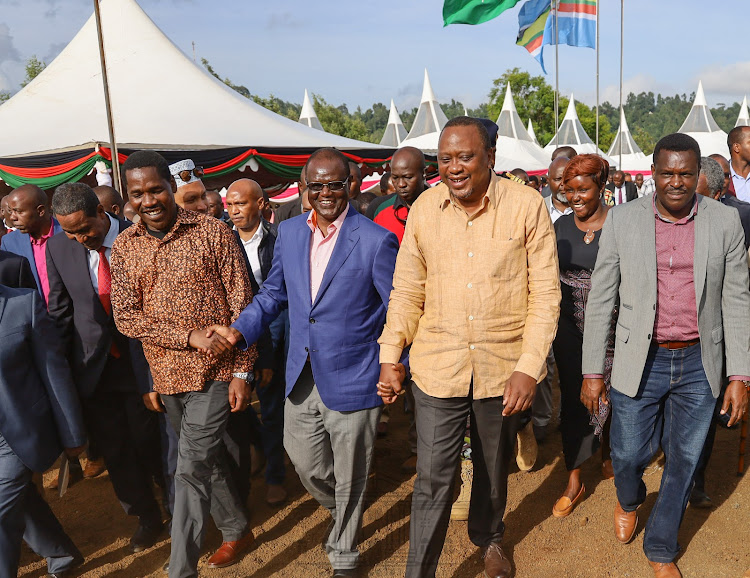 Uhuru said his administration is seeking public servants who will take their responsibilities seriously with more actions than words.

There has been a lot of memes on Kiunjuri online and many Kenyans, especially on twitter making fun of Kiunjuri before and after he was sacked due to the remarks he made.

But Uhuru on Saturday said he wants a country where leaders are put in office and they deliver results.

Kiunjuri on Wednesday appeared to take a swipe at President Uhuru Kenyatta for what he termed as 'arm twisting'.

Speaking in Kiambu in the presence of Deputy President William Ruto, the former CS said it was unfair for the Mt. Kenya politicians to always be directed on what to do or who to follow.

Kiunjuri who was dropped by Uhuru from the Cabinet in a reshuffle early this month added; "Ya kupimaniwa hewa tuwache."

Kiunjuri said though he has no problem with the President, those around him are to blame for wanting to take everything for themselves.

While declaring his loyalty to Deputy President William Ruto, Kiunjuri said he will remain friends with the DP at all costs.

Kiunjuri bravely spoke of his tribulations in government after his sacking by Uhuru.
News
2 years ago

"Deputy President, I can assure you that you will have one general to the end. If you end up in opposition we shall be together... if you form the next government we shall be there," he said.

But Uhuru said with the current desert locust invasion across the country, it is evident that the new CS, Peter Munya seems to be doing a lot just within few days he has been in charge of the docket.

“Within one day a CS I do not wish to name when he was changed work started being done and not taking of pictures. That is what we want from leaders if you are given a mandate deliver on it,” Uhuru said.

Kiunjuri's statement came just a day after Uhuru warned that he would not be distracted from the BBI by those raising issues about it.

He also said the country will be stable and move forward if everyone is united.

Kiunjuri declared undying support for Ruto whether in the opposition or forms government.
News
1 year ago
by DENIS DIBONDO
News
01 February 2020 - 21:01