Why Kiambu DG Nyoro was not sworn in

Unseemly rush? He was to be sworn less than 24 hours after the Senate impeached Waititu.

• It is said the haste to swear in Nyoro could boomerang on the Judiciary. It is understood on Thursday mid-morning, CJ David Maraga called a crisis meeting that resolved to shelve the ceremony.

• Processing of the Gazette notice 'unduly; swift. Judiciary said a new date will be communicated in due course. 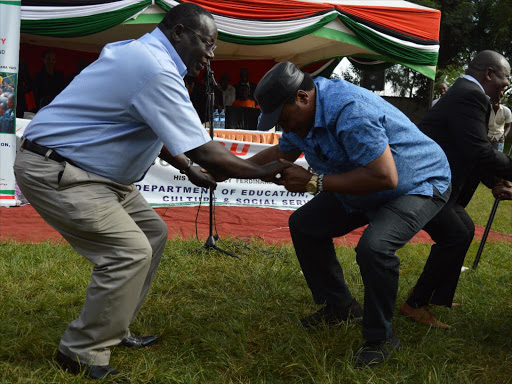 Questions have been raised whether the Senate and the Judiciary followed procedures in impeaching Kiambu Governor Ferdinand Waititu and deciding to swear in Deputy Governor James Nyoro less than 24 hours later.

And Waititu himself said the Kiambu County Assembly did not follow proper procedures in 'impeaching' him in December because it lacked the required two-thirds quorum. He wants both the impeachment by the assembly and the Senate quashed, saying they were marred by "grave illegalities".

The matter will be heard on Monday by Justice James Makau.

And so the swearing-in, hurriedly announced, was hurriedly called off on Thursday by the Judiciary.

“For unavoidable reasons, the swearing-in of Dr James Nyoro will not be conducted today. A new date will be communicated in due course. We apologise for any inconvenience," the Judiciary said after issuing a press invite for 8am.

On Wednesday evening, senators concluded debating and voting on the impeachment motion minutes to 10pm.

Kenyans were taken aback when they awoke to a Gazette notice by Senate Speaker Kenneth Lusaka, saying Waititu had been sent packing.

Processing the Gazette notice was so swift that Senate Majority Leader Kipchumba Murkomen sarcastically said, "the Government Printer should be emulated for its efficiency."

Further, in what appeared to be a choreographed sequence of events, the Judiciary’s department of public affairs issued a media invite, saying Nyoro would be sworn to replace Waititu in at 8am. High Court Judge John Onyiengo was to preside.

Murkomen criticised the haste, saying the law provides for timelines that must be adhered to.

“A High Court Judge cannot preside over the swearing-in of the DG of Kiambu to be a governor before 10 days are over and before they Gazette the date, time and place for conducting the swearing-in ceremony. But you know what? Everything is working like a clock in the new Kenya. If the Judiciary is eager to do this, then nobody can stop reggae,” Murkomen noted.

However, Makueni Senator Mutula Kilonzo Jnr said Nyoro should not be subjected to the procedure of swearing-in a governor-elect.

“The Act cannot create an impediment to the express provisions of the Constitution. It is absurd for the deputy governor to be referred to as a Governor-Elect — Golden Rule of interpretation," he said.

But Murkomen said the law should not bend “for political expediency and to suit short-time interests".

“The Judiciary must wait for the 10 days. In the fullness of time, I will be vindicated both on the sham impeachment that took place and the purported swearing-in,” the Elgeyo Marakwet senator said.

Speaking shortly after 2pm when the oath-taking had been aborted, Nyoro said he will respect the law and remain the acting governor.

"My position remains as acting governor of Kiambu and that is very clear as the Constitution Section 181 says. Waititu ceased to be the governor on Wednesday night upon impeachment," he said at the county headquarters in Kiambu town.

Nyoro added, "The reason we are here is because people did not follow the law and two wrongs do not make a right and also we too cannot say that we will be sworn in as it will be wrong. Wewant to set an example by following the law."

"Our Constitution did not anticipate a governor to be asked to step aside because of moral ill health and a circumstance where the deputy governor is allowed to step in and act as the governor. The County Government Act limits how much that acting governor can do and that creates a laguna and that is the kind of thing we have been having in the last six months," Nyoro noted.

Kiambu Assembly Speaker Stephen Ndichu announced that Nyoro cannot be sworn in as the governor due to timelines provided for in law. He sought the legal opinion of the Attorney General Paul Kihara if they could proceed with the swearing-in.

They could not. Hundreds of dignitaries and spectators were disappointed.

Ndichu said that Kiambu must set the pace in following the law.

Meantime, in documents filed in court Thursday, Waititu said the impeachment motion passed by the assembly on December 19 last year was passed without a quorum, hence .it ought not to have been debated. The impeachment violated the County Government Act and the Assembly Standing Orders, he said.

Thirty members of the assembly were not present, reflected in their affidavits dated December 19, 2019, and January 24.

Waititu says the resolution for impeachment as presented to the Senate by the county assembly is founded on grave violations of the Standing Orders, key fundamental rights and constitutional guarantees, and the right to a fair hearing as guaranteed by the Constitution of Kenya.

Waititu wants the court to issue orders restraining any organ from implementing Senate resolution passed on January 29, and any action resulting from it.

Also sought is an order stopping the gazettement of the date, time and place for the swearing-in of Nyoro as governor.

“I was unlawfully and procedurally removed from office by the assembly on 19 December and subsequently a resolution by the Senate passed on 29 of January this year," Waititu says.

"The resolution of the assembly was passed with a vote 57, way below the required threshold of 62 as enshrined under Section 33 (1) of the County Governments Act,” he says.

He claims that the "biased decision by the members of the assembly present, and the Honorable Speaker was driven by the desire to execute malicious and punitive measures" upon him.