Waititu impeachment is a violation of law - Murkomen

James Nyoro is expected to be sworn in today as governor of Kiambu County.

• He said out of all the key witnesses listed against the governor, Murkomen said none of them was called to present their views during the senate plenary. 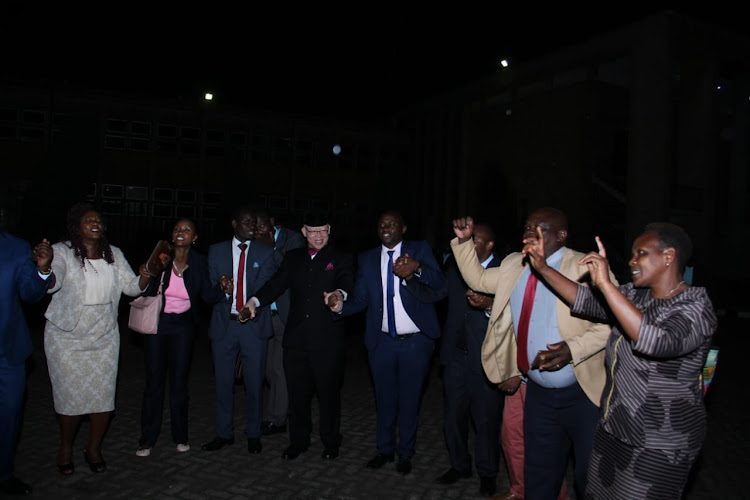 Some of the senators who voted for the impeachment of Waititu celebrate outside the Senate
Image: EZEKIEL AMING'A

Murkomen who is also the Elgeyo Marakwet Senator said the verdict by the Senate was a violation of the law.

Speaking on Kiss100 on Thursday, Murkomen said there was no credible evidence to implicate Waititu against the charges he was accused of.

“There was no credible evidence that was presented to prove the charges that were leveled against governor Waititu,” Murkomen said."

"For Kiambu MCAs to pass the impeachment motion against Waititu they needed at least 62 members to vote on the motion which did not happen."

Out of all the key witnesses listed against the governor, Murkomen said none of them was called to present their views during the senate plenary.

Murkomen further took issues with the constitutional timelines the county assembly notified the Senate speaker of the impeachment.

While opposing his impeachment, Waititu had argued that the Kiambu County Assembly did not meet the required quorum to go through with the impeachment.

He also argued that no credible evidence had been presented to prove that he had awarded tenders to his wife and daughter.

The post-handshake political divisions were eminent during the Senate's discussion of Waititu's impeachment.

Senators allied to President Uhuru Kenyatta and opposition leader Raila Odinga voted for the impeachment whereas those allied to Deputy President William Ruto voted against it.

As a result of the Impeachment, the Judiciary is this morning expected to conduct a swearing-in ceremony for James Nyoro who will pick over as governor Kiambu.

Though Waititu is currently battling corruption charges in court, it is not yet clear whether he will move to the High Court to appeal the decision by the Senate.

Says there was no quorum during impeachment vote at county assembly.
News
1 year ago

I toiled for votes - Waititu pleads for senators' support during trial