Mudavdi has made abrupt reversals throughout his political career. 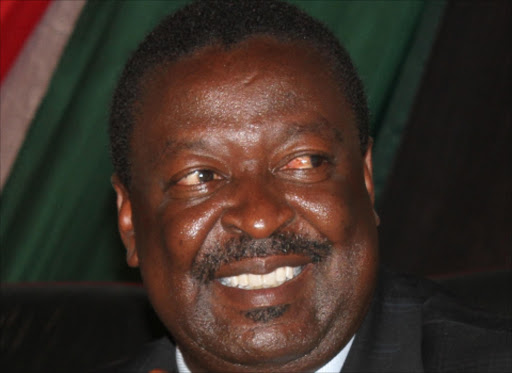 He is famously called “the gentleman of Kenyan politics,” but Musalia Mudavad is also famous for flip-flopping.

The self-proclaimed voice of the opposition (what's left of it) has made unforeseen and abrupt reversals on a number of issues throughout his political career.

"A foolish consistency is the hobgoblin of little minds," Ralf Waldo Emerson said, adding that a great man does not have to think consistently from one day o the next.

Mudavadi would, no doubt, like to think of himself as the great man referred to by Emerson.

Still, the ANC party leader is perhaps too cautious or afraid of making mistakes, and his rivals are capitalising on it.

The most recent example is his opposition to the Building Bridges Initiative mass meeting in Bukhungu, Kakamega. He asserted the meeting was meant to achieve political benefits for Raila Odinga and his ODM party.

He said the meeting had ill motives and little to do with the BBI report since it was targeted at him as a senior politician from western Kenya.

Mudavadi asked how organisers of the event expected to conduct an expert briefing on the report to 30,000 people.

But on January 18, Mudavadi was among leaders who attended and even addressed the gathering.

“I am a Kenyan and your son…here to dispel rumours that I don’t support the BBI report because I have been involved since the launch of this process,” he told the gathering.

Media reports indicated that a phone call from President Uhuru Kenyatta on the eve of the meeting convinced Mudavadi and the Ford Kenya boss, Moses Wetang’ula, to attend the forum.

Political commentator and lawyer Danstan Omari said it was shameful for Mudavadi to galvanise the western bloc not to attend the Bukhungu meeting and then turn around to attend.

“I was surprised to see him at the meeting. This means he has no stand. He has been standing as the only voice of reason for the opposition but a mere treat to a presidential trip to Garissa to launch a wind power project seemed to have changed everything,” he said.

“Mudavadi has no strategy of becoming President. What he has is an intention. How could he abandon his meeting and land in an opponent’s gathering?” Khalwale asked.

He said reports that Mudavadi attended the Bukhungu meeting after receiving a call from President Uhuru were 'regretful and shameful'.

“What if Uhuru calls and tells him not to run for the presidency and instead support Raila? Is he going to do what he is being asked to do? He is a coward and that is why I divorced him,” Khalwale said.

Nominated MP Godfrey Osotsi, however, said it was wise for Mudavadi to attend the Bukhungu meeting as opposed to attending a parallel meeting Mumias own.

“When he came to Bukhungu, people were happy. Not necessarily because they support him but because he had joined the right group. We were all happy because that was the way to go,” Osotsi said

He said Mudavadi has many times made U-turns on critical issues. “His association with Wetang’ula is a flip flop. They had promised us they would merge their parties but are now silent on the matter. There is a problem with that kind of leadership because one appears to be confused,” he added.

Advice Mundalo, a political and communications strategist, said Mudavadi’s decision to join a meeting he was initially opposed to may crown him as an undependable, inconsistent and indecisive leader.

“Going forward, people may not take his opinion on the political matrix seriously as they would always assume that he will change his mind last minute,” Mundalo added.

He praised Mudavadi’s recent contributions to national discourse and openly standing in as the rightful opposition leader when others scrambled to join the government dinner table.

In another flip-flop case, when Nasa leader Raila Odinga took the oath as the 'People’s President' at a packed Uhuru Park in Nairobi on  January 30, 2018, Masa co-principals Mudavadi, Moses Wetang'ula and Kalonzo Musyoka were missing.

They had promised Kenyans they would attend and stand behind Raila.

Raila appeased supporters by telling them the other three principals were still in Nasa despite their absence.

Their absence was described as the height of betrayal. Mudavadi explained later that leadership comes with a sense of responsibility, which includes respecting the Constitution.

“If you go that route, which country will receive you? Which nation will recognise you? For some of us, we decided then that swearing-in was not the right way to go,” he said.

And when LDP was teaming up with the National Alliance Party of Kenya (NAK) of Mwai Kibaki to form Narc, Mudavadi opted out and returned to Kanu.

He ignored the Raila-led rebellion when members stormed out of Kanu to protest President Daniel Moi’s choice of Uhuru Kenyatta as his preferred successor. Mudavadi was named vice president but he went on to become the shortest-serving holder of that office — he served for two months.

Mudavadi lost the election with Uhuru and even failed to defend his Sabatia seat.

Omari called that another classic flip-flop.

“When everybody moved from Kanu to form Narc, he abandoned them and came back and was made vice president. By his conduct, he shows he has no stand," Omari said.

There could be compelling reasons to explain why Mudavadi is "full of contradictions," he said.

Mudavdi was Finance minister during the Goldenberg scandal.

He was Local Government minister when Nairobi was buying land in Mavok, Machakos, for a  cemetery. The price was greatly inflated and the quality of land made it unsuitable for a cemetery.

Omari continued, “Remember, Mudavadi has never been arrested or called to appear before the DCI. So, many times, he intends to take a stand, he cannot because there are skeletons that could be revived.”