Jaguar said Babu could benefit from the 200 mattresses he is donating to Industrial Area Prison.

• Babu Owino was on Monday charged with the attempted murder of Felix Odhiambo, popularly known as DJ Evolve, at B-club.

• CCTV footage from the club showed Babu Owino drawing his gun and shooting a man. 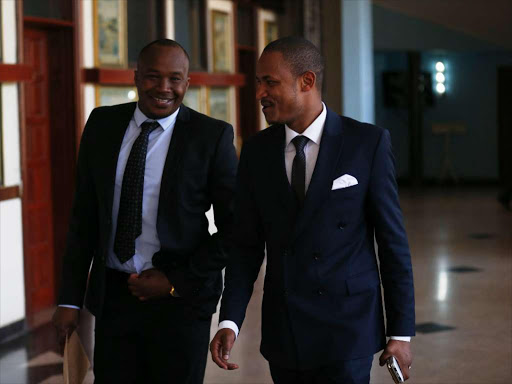 Starehe MP Charles Njagua, popularly known as Jaguar, has taken a swipe at Embakasi East MP Babu Owino who is in remand at Industrial Area.

Jaguar on Tuesday said he was donating mattresses to Industrial Area prison and Babu could benefit from them.

"Today I will donate over 200 mattresses to Industrial Area Prison, Starehe. I believe that remandees should be as comfortable as possible as they await the outcome of their cases. My colleague, Hon. Babu Owino, will benefit from one of the heavy-duty mattresses," he wrote on Facebook.

Babu was on Monday charged with the attempted murder of Felix Odhiambo, popularly known as DJ Evolve, at B-club.

CCTV footage from the club showed Babu drawing his gun and shooting a man.

He was also charged with behaving in a disorderly manner while carrying a firearm.

Babu appeared before chief magistrate Francis Andayi and denied all charges preferred against him.

He urged Kenyans to wait for his side of the story over the shooting incident at B-Club last Friday.

"I urge Kenyans to wait for my side of the story of what happened when I come from my new home at Industrial Area prison," Babu tweeted.

The MP said that he needs justice and it must be served to him, adding "meanwhile these are occupational hazards."

A CCTV footage from the club showed Babu Owino drawing his gun and shooting a man.

According to the CCTV  footage shared by K24 on Twitter, the gun shot made those around Babu to run helter skelter as others looked by.

Wait for my side of the story - Babu Owino

He will remain in remand for seven more days.
News
2 years ago

Babu who was still smoking shisha took out the pistol and shot at the man.
News
2 years ago

Legislators Charles Njagua and Babu Owino fought at Parliament's media centre on Tuesday, forcing sergeants at armsto intervene. It is not clear ...
News
5 years ago
Post a comment
WATCH: The latest videos from the Star
by TRACY MUTINDA Lifestyle, Entertainment Writer
News
21 January 2020 - 16:12
Read The E-Paper