• The President's camp wants to install lawmakers who are loyal to him in House party leadership.

• The DP controls up to 15 out of the 29 national assembly committees. 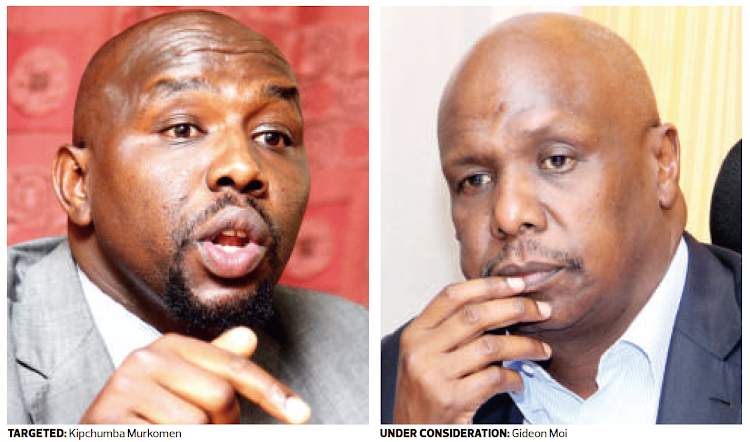 Days after changes in the Executive seemed to push Deputy President William Ruto out of Mt Kenya and cut his influence in Cabinet, the focus has shifted to Parliament.

The Star has learnt that President Uhuru Kenyatta wants to take control of both houses to further assert himself and drive government agenda before he retires in 2022.

Top on the list of those targeted for removal is Senate Majority Leader Kipchumba Murkomen, a Ruto ally who has been critical of the President and his Jubilee allies.

State House sources told the Star yesterday that the President, Jubilee's party leader is considering entering into an agreement with Gideon Moi.

Thereafter, Uhuru will convene a parliamentary group meeting to replace Murkomen with the Baringo Senator.

"The leadership of the house - the Majority Leaders, Whips etc - in both National Assembly & Senate were nominated by the Jubilee Party to champion the President’s agenda in the house - strictly - as the President articulated in the first Jubilee PG on 30/8/2017.

He said ‘President’s Men’ in Parliament will ensure that party positions work towards promoting and protecting the President’s agenda.

"We will not allow those meant to promote & defend the President’s position to attack and undermine it, as happened in 2019. Any Jubilee MP who currently occupies a leadership position in either Senate or the National Assembly is therefore on notice,” he said. 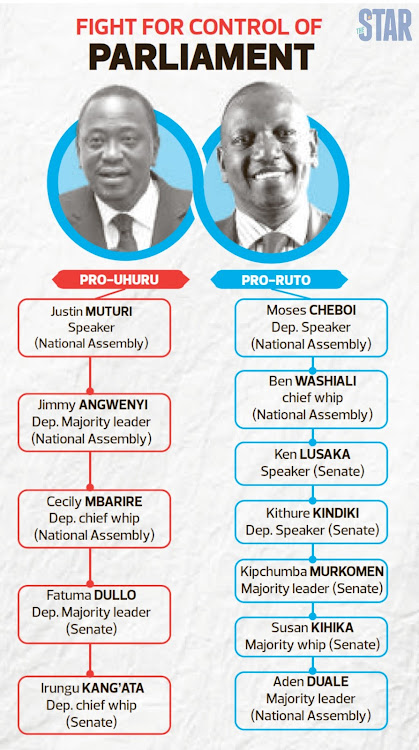 He said those opposed to the President had been given notice to "pack & leave that office, before February".

Wambugu said like Mwangi Kiunjuri, those opposed to the President's agenda will leave their offices and become ordinary members of the Parliament.

Sources at immigration say the government is investigating the possibility that she may be holding two passports, a US and Kenyan one.

On Monday, Kihika was barred from entering the venue where President Kenyatta handed title deeds to a group of women who sang for his father.

Apart from Murkomen and Kihika, the President also wants to replace committees chairs who are not backing him.

"The changes will be far and wide. He wants to do all he can to secure his legacy," said an MP aware of the planned changes.

The crackdown against Tangatanga MPs, the Star understands, aims to vanquish Ruto's influence in Parliament as the President seeks to take a firmer charge of his legacy projects.

The move could worsen the frosty relationship between Uhuru and Ruto and may trigger an implosion within the ruling Jubilee party.

The President on Tuesday fired Kiunjuri, a close Ruto ally, from the Agriculture ministry and reorganised the government in a manner that analysts said isolated Ruto from the nerve centre of government.

The imminent changes will also bring several new faces in the leadership of House committees.

Parliamentary committees are crucial to the operations of the bicameral House and have sweeping powers in approving government policy and budget preparation.

The President's handlers believe allowing Ruto to hold unfettered sway in Parliament could be risky for Uhuru's legacy projects.

“The President is determined to effect changes in the leadership of the National Assembly, the Senate and House committees because some people entrusted with driving the government agenda are pursuing their own interests,” a source within the presidency said.

Yesterday, Duale downplayed any housecleaning in Parliament, saying the factional wars playing in Jubilee are not manifested in their work.

“Those talking about that (ouster) should not bring their issues to Parliament. Let them stick to funerals and barazas. In Parliament, we don't have Kieleweke or Tangatanga factions. We only have the Jubilee party under my leadership,” he said

President sacks one, demotes two of the DP's allies in Cabinet in strategic restructuring.
News
1 year ago

However, the Star has established that in the Senate, Uhuru is keen to replace Nandi Senator Samson Cherargei.

Cherargei is a staunch supporter of the DP and chairs the powerful Justice and Legal Affairs Committee.

The Constitution and the Standing Orders require that the position of the leader of the majority party in the House be occupied by a senator from the largest party or coalition of parties.

The Jubilee Party has 34 senators — 24 elected and 10 nominated — making it the largest political party to occupy the position of majority leader.

Kanu has two elected senators and one nominated.

The standing orders also require that to remove the majority leader from office, at least a majority of the senators belonging to Jubilee party (18) must vote against Murkomen.

It is also required that minutes of such a vote be forwarded to the House alongside the resolutions.

Currently, Jubilee is not in a binding coalition pact with Kanu but has had a gentleman's working agreement with the Independence party in Parliament.

However, Moi does not see eye to eye with Ruto as they battle for political supremacy in the vast Rift Valley region.

He has twice locked out Ruto from seeing ailing Mzee Moi at the ex-president's Kabarak home.

Axe that felled Kiunjuri should have felled all politicking CSs.
News
1 year ago

Cabinet reshuffle: How many more to go, Mr President?

Kenya has leaders who always had a high affinity for corruption.
Opinion
1 year ago
by JAMES MBAKA Senior Political Writer
News
17 January 2020 - 05:00